Anne Franks legend grows, along with some controversies

LOS ANGELES — Fifty-six years after Anne Frank perished in Bergen-Belsen, her life and legacy loom larger than ever.

Among the signs of continuing interest:

*A four-hour miniseries, following Frank's life from her happy school days through her two years in hiding in Amsterdam and to her final days in the concentration camp, airs nationally over ABC-TV on Sunday and Monday

*The 20th Century Fox studio is developing a feature movie based on "The Diary of a Young Girl."

*A new edition of the diary, including five previously unpublished pages describing her parents' difficult marriage, was released in March.

*The Helios Dance Theater premiered "About Anne: A Diary in Dance" in Los Angeles last month.

*An interactive CD-ROM titled "Anne Frank House: A House with a Story" was released earlier this year, offering a virtual tour of the building and the "secret annex" where the Frank family hid.

*In Boise, Idaho, ground has been broken on a $1.6 million Anne Frank Human Rights Memorial and Park.

What accounts for the continuing, even escalating, fascination with Frank, which arguably has made her the foremost icon of the Holocaust?

"The basic story is extraordinarily engrossing. It has suspense, romance, tragedy and potential uplift," says Lawrence Graver of Williams College in Massachusetts, who has written extensively on Frank, including her entry in the current Yale Encyclopedia of the Holocaust.

"Reading her diary is a convenient way, a hook, to introduce the Holocaust to, say, eighth-graders in Iowa," Graver adds.

"Anne wrote with great insight. She was an appealing girl, but one who can be easily exploited," says Marvin Prosono, a sociologist at Southwest Missouri State University and an authority on Holocaust literature.

Others warn of the dangers of relying too heavily on Frank's diary for an understanding of the period.

"People read the 'Diary' because they think they are learning about the Holocaust. But what they are getting is a safe and sanitized version, without the pain," says Lawrence Langer of Simmons College in Boston, who has published widely on the literature and testimony of the Holocaust.

Frank in fact wrote two versions of her famous diary. The second version, written on loose-leaf paper, was in literary form, with the people hiding with her disguised by pseudonyms.

Her nonfiction memoir is by far the more popular of the two versions. "Anne Frank: The Diary of a Young Girl," first came out in 1947 when Otto Frank, Anne's father and the sole survivor of the family, persuaded a Dutch publisher to print 1,500 copies.

Since then, the "Diary" has sold 25 million copies in 55 languages.

However, Otto Frank and the publisher agreed to excise parts of the "Diary" they felt unsuitable, mainly those dealing with his daughter's feelings about her identity as a Jew, her sexual awakening and her ambivalence about her mother and her parents' loveless marriage.

The edited book's attempt to homogenize Frank's character and universalize her fate was exacerbated, in the eyes of critics, in the 1955 play by Frances Goodrich and Albert Hackett.

Peaking with Frank's uplifting curtain line, "I still believe, in spite of everything, that people are really good at heart," the Broadway production was a commercial success and won a Pulitzer Prize and a Tony.

Had Frank survived Bergen-Belsen, Langer suggests, she would have repudiated the curtain line and other feel-good homilies in her diary.

What upsets scholars most, however, is that Frank's commercial popularity has made her, posthumously, into the primary spokesperson for the Holocaust.

"Anne was, excuse me, a pisher" — a young, inexperienced person — Langer said. "She was smart, but she was 14 to 15 years old; you couldn't expect her to be profound."

Graver agrees that the diary's "impact is all out of proportion to its part in the Holocaust."

In a 1997 New Yorker essay, Cynthia Ozick went so far as to ask whether history might have been better served if the diary, so easily reduced to kitsch, had been lost or destroyed.

The Anne Frank cult has taken some bizarre forms. Otto Frank's second wife told Graver of her correspondence with an Anne Frank Protestant Church in Japan, which had a picture of Jesus on one wall and a picture of Frank on the other.

But even as critics were nagging, the interpretation of the diary and Frank's persona were changing.

One factor was the "discovery" of five pages that Otto Frank had given to a friend, which contained much of the material the diarist's father had expunged.

In addition, writers and filmmakers started talking to classmates and friends who had known Frank either during her school days, while she was in hiding or during her last months in the concentration camp.

One result was a 1995 Oscar-winning British documentary, "Anne Frank Remembered." Then, in 1997, Wendy Kesselman wrote a toughened adaptation of the earlier Broadway play.

One year later, Austrian writer Melissa Muller published a thoroughly researched biography of Frank, which formed the basis for the ABC miniseries.

As the perception of the character has changed, however, so has the infighting about who owns the "real" Anne Frank.

Ever since the diary's initial publication, the late American writer Meyer Levin fought unsuccessfully to present a more realistic and Jewishly identified picture of Frank to the public.

In recent years, the Anne Frank-Fonds in Basel, Switzerland, which owns the copyright to the diary, and the rival Anne Frank House in Amsterdam have been jealous and litigious guardians of her legacy.

Pressure from the Fonds forced ABC to drop its original plan to film the "Diary," and to draw instead on the Muller biography. Steven Spielberg, who had signed on to produce the ABC project, withdrew to avoid controversy.

One of the virtues of the ABC version is to place Frank and her family firmly within a Jewish context.

"There have been past attempts to universalize Anne, but the fact is that she died because she was a Jew," says Kirk Ellis, who wrote the script for the telefilm. 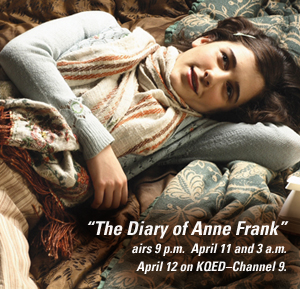