Ask Daniel Ducoff what he does for a living, and he gives a one-word answer.

It is, says Ducoff, a noble profession with a simple job description: Get the shy and the klutzy up on their feet dancing.

The San Francisco-born son of a rabbi plies his trade with Yiddishe Cup, a Cleveland-based klezmer band with a knack for comedy. In fact, says Ducoff, Yiddishe Cup’s mission is to revive the wacky Jewish humor of the ’50s and ’60s made famous by the late Mickey Katz.

The band’s most recent CD, “Meshugeneh Mambo,” exemplifies the shtick of the shtickmeister, musically parodying everything from cha-cha to doo-wop to rock. Says Ducoff: “We felt the world didn’t need another straight klezmer instrumental record.” Among the song titles: “Gentile on my Mind,” “Knish Doctor” and “Nudnik the Flying Shisl.” When they perform, they form a “nosh” pit at the lip of the stage.

“We had a sense of wanting to put more Purim into Jewish culture,” he adds. “It’s got to be fun.”

Yiddishe Cup has been Puriming up simchas across 15 states, beyond the standard-issue weddings and b’nai mitzvah to the college circuit and more. (The musicians once played for 7,000 people in that bastion of Yiddishkeit, El Paso, Texas.)

On stage the sextet, led by clarinetist Bert Stratton and singer/keyboardist Alan Douglass, play a rumpus-roomful of instruments, including trombone, dobro, slide whistle and theremin (the quirky early 20th-century electronic box that presaged the modern synthesizer).

But Ducoff mostly dances. With the audience.

“Sometimes they think I’m part of the audience,” he says. “I’ll do the bottle dance, sing a little. The band is my instrument.”

Though he’s lived in Ohio for many years, Ducoff grew up in the Forest Hill section of San Francisco, and his parents were pillars of the Bay Area Jewish community. His father, Rabbi Bernard Ducoff, headed the local chapter of the Bureau of Jewish Education from 1954 to 1979, and his mother, Helen, was a Jewish educator. Ducoff’s family belonged to Congregation Ner Tamid in the Sunset.

“I went to every Jewish community event there was,” recalls the Lowell High School graduate. “I majored in environment biology at Berkeley, but I danced on the side with Israeli dance groups in Bay Area.”

He took his love of dance even further, serving as director of a Polish dance company. He and the troupe once traveled to Poland, where he visited the very shtetl his grandmother came from.

Along with dance, he had also developed a love of Jewish music. “I spent summers with my grandparents in Brighton Beach,” Brooklyn, recalls Ducoff. “They had lots of klezmer and comedy records. Mickey Katz was the great klezmer comedy guy who started out as a big band clarinetist, then with Spike Jones and then with his own band. He was the king of Jewish comedy.”

Ducoff went on to attend graduate school in New York, studying community organization. Once he accepted the position of arts development director with the Jewish Community Federation in Cleveland, Ducoff moved to the Buckeye State and officially become a Midwesterner. Perhaps not so coincidentally, Cleveland was the birthplace of Katz, as well as Katz’s son, Joel Grey.

“I never met anyone else who moved from San Francisco to Cleveland,” says Ducoff, who lives in that city’s heavily Jewish Beachwood section. “But Cleveland is a real close-knit Jewish community, almost a shtetl. Here you wear your Judaism on your sleeve.”

Ducoff joined Yiddishe Cup 15 years ago because, he says, “We saw a need for a simcha band in Cleveland. No one else was doing it.” With its increasing success, the band has demanded more time away from family and Ducoff’s “real” job (he works as a consultant for nonprofits). But he’s not complaining.

“We play Simchat Torah and Purim every year,” says Ducoff. “We’re part of the community, and we give back to it on a cultural level. A lot of bands preserve the liturgical music, but we focus on bringing back the more secular elements.”

Not every Yiddishe Cup gig is on the concert stage. Ducoff’s band performed at all three of his sons’ brit milah ceremonies, though presumably the newborns did not have as good a time as the adults.

Meanwhile, the gigs keep on coming, and for Ducoff, that’s good news. Living in the town considered the birthplace of rock ‘n roll, he’s always got the creative juices flowing. “When they started the Rock ‘n’ Roll Hall,” he notes, “I thought we should open a new kosher bakery: the Challah Fame.”

“Meshugeneh Mambo” is available at amazon.com, CDBaby.com, and the band’s Web site, www.yiddishecup.com, where cost is $15 plus $3 shipping. 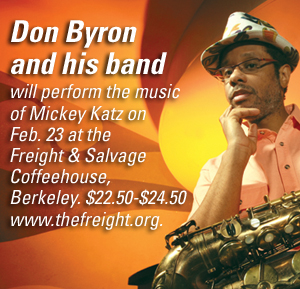