Singing joyfully, a procession of more than 60 members of the Mendocino County Jewish Community-Inland and their guests strolled through downtown Redwood Valley Sunday morning, Oct. 10, to the dedication of the new Kol HaEmek Synagogue.

The Torah, dressed in embroidered red velvet, was carried beneath a colorful canopy, to its new home.

“There was a deep drive for us to have a home for our Torah and a place for the education of children and adults,” said Nancy Moilanen, the congregation president. “There were many contributions from our community and the community-at-large to make this possible, and we’re deeply grateful. We look forward to having an open house and welcoming other denominations to visit us.”

The group has been meeting in living rooms and rented halls, and didn’t have a resident rabbi until last year. Moilanen has been involved with Kol HaEmek since the beginning 25 years ago, and was thrilled to see inland Mendocino County’s first synagogue open to the public.

Willits Mayor Karen Oslund joined the one-mile walk along with two members of her church. “It’s wonderful to see a fixed home for the congregation,” she said.

Formerly a simple three-bedroom home, the building has undergone a major transformation with the effort of many volunteers. Remodeling is now about 90 percent complete.

The procession started musically at the home of David and Linda Koppel in Redwood Valley, then traveled through downtown Redwood Valley and up School Way. Three convertibles carried non-walkers and children with a mini-Torah. Bella Feldman, a cantor who recently moved to Ukiah, led the group in gusty tunes all the way, in Hebrew and English. Rabbi Shoshanah Devorah carried the symbols of the Sukkot holiday: an etrog and lulav.

Dr. Robert Gitlin nailed the mezuzah to the doorway with the help of his family, while the rabbi explained the importance of a mezuzah. “Thresholds are a very special place. What do we take with us? What do we leave outside? It’s really a place of change, of transformation. That’s why we place the mezuzah on the doorpost.”

The Torah was passed ceremoniously from the first president of the board of directors to the following past presidents, then through the doorway to the current president and members of the board. The youngest and oldest people present had the honor of opening the Ark.

She and husband Norm Rosen gave a brief history of the 100-plus-year-old Torah, which comes from a rural community in Europe that is similar to Ukiah Valley. Reading from a letter from a Holocaust survivor, Karen Rosen said: “Pisek was a small town in Southern Bohemia, with 16,000 people, beautifully situated with the River Optava flowing through it. In the summer it became a resort town. Pisek had about 300 Jews. After the war three came back.”

Holding the lulav and etrog, Pastor Paul Hawks of the Seventh-day Adventist Church of Ukiah joined Devorah, Rabbi Margaret Holub of Mendocino Coast Jewish Community, and others in blessing the new synagogue.

Ten families put up money in 2001 for the building, located between Ukiah and Willits. The building was rented out for two years while permits were filed and Kol HaEmek members worked to raise funds. The congregation was able to purchase the building in 2003.

Gitlin was instrumental in obtaining the building and directing the remodeling projects. But he’s reluctant to take credit for his efforts. “The people of the minyan were people who were asked to do this. Without hesitation they went ahead and did it. The highest form of giving is anonymous, and most of them want to remain anonymous. There’s really something inspirational about that it’s ego-less giving.”

A similar version of this story appeared in the Willits News. 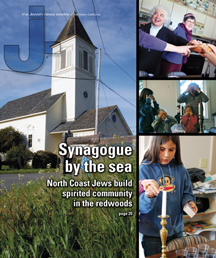