Sparks (not oil) may fly at Latke Ball in San Francisco

If it were possible to go back in time and make a movie of the night Joe Strulowitz first met his girlfriend, the film would open with a wide-angle shot of a crowded San Francisco dance club.

The place: Ruby Skye. The occasion: the Latke Ball.

“The place was rocking, the nightclub lights were spectacular and the vibe was electric,” he recalled.

Strulowitz spotted her across the room and, though he very much wanted to talk to her, he “got cold feet … but I had a funny feeling I would see her again real soon.”

More about that later.

Stulowitz had such a good time two years ago that last year he helped plan the event, and this year he’s in charge, along with his co-coordinators, Vicki Krupnick, a volunteer, and Lauren Taplinger, who works for the Young Adult Division of the S.F.-based Jewish Community Federation, which puts on the Latke Ball for Bay Area Jews in their 20s and 30s.

This year the event is being co-sponsored by Engage, a social dating Web site (www.engage.com). About 1,000 people are expected to attend, Taplinger said.

They’re hoping that at least one person has a similar “funny feeling” at this year’s celebration — which like every year happens Christmas Eve. The event returns this year to Ruby Skye, a dance club at 420 Mason St. in San Francisco.

“There’s something to be said about being in a huge room filled with incredible music, lighting, atmosphere and 1,000 of your fellow young Jewish sisters and brothers from the Bay Area rocking out all night long,” Strulowitz said.

The theme for this year’s party is “Let There Be Light,” and while the details are still being worked out, the coordinators say that there will definitely be some surprises related to that theme.

DJ Solomon, who has served as music-master at past Latke Balls, returns this year and for the first time will be joined by DJ Mei Lwun, a Jewish-Chinese spinmeister known for his mashups.

Krupnick said she hopes to see some new faces at this year’s event — and undoubtedly she will. For her first Latke Ball, she was new to the Bay Area and went alone. Years later, she’s still friends with some of the people she met that night.

“A lot of people come to these events alone and leave having acquired a whole new set of friends,” she said.

As for Strulowitz, he did catch up with the cute girl from the Latke Ball. Just days after the dance, she emailed him through JDate.

“Well, as they say, the rest is history,” he said. “Two years later I’ve moved out of the city, and we live together along with our dog, Aspen, and our cat, Matzo Ball.

“It goes to show you — you never know what kind of amazing thing can happen at the Latke Ball.” 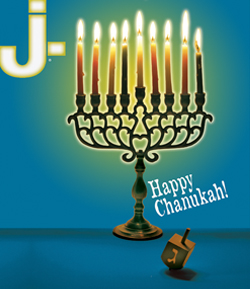