For some 40 years, the Dunsmuir House in Oakland has been an East Bay landmark for weddings, tours and seasonal celebrations. Many have visited the elegant, Edwardian mansion — built 110 years ago by the son of a rich coal baron — and its 50 acres of verdant gardens and landscaping.

But most people don’t realize that the estate has a strong Jewish component to its history — having been owned by the luminary Hellman family for more than 50 years.

To help shine a light on that fact, the estate’s name is being changed to the Dunsmuir-Hellman Historic Estate.

“It always seemed to me that there was no reason in the world why the place shouldn’t have our name on it,” said Warren Hellman, renowned financier and founder of San Francisco’s Hardly Strictly Bluegrass festival.

“When the property was transferred over to Oakland in 1961, my uncle refused to let them use the name. I don’t know why — and a lot of the family has wondered about that for years.”

Hellman has worked with Jim DeMersman, the estate’s executive director, to bring about not only the name change — still pending official approval from the Oakland City Council — but to also focus on the link between the estate and the Hellmans.

“Making that connection is something that interests me,” DeMersman said. “I haven’t found any other historic homes yet that deal with the Jewish American experience. To me, that’s important, because there are so many historic-house museums in this country that all tell rather similar stories.”

The Dunsmuir story began as one of those “similar” tales. Alexander Dunsmuir, who came to San Francisco in 1878 to oversee his family’s coal business, built the mansion as a wedding present for his bride in 1899. At the time he purchased some 600 acres in East Bay foothills — near what is now the Oakland Zoo — the land was orchards, farms and wide-open spaces left over from the Spanish rancho days.

But Dunsmuir never got to live in his 37-room mansion. On the couple’s honeymoon in New York, he was stricken with alcoholic meningitis and died. His wife, Josephine, returned to live in the house, but in 1901, a mere 18 months after her husband’s death, she too died, succumbing to lung cancer.

Five years later, Isaias Hellman, a co-founder of Wells Fargo and head of a wealthy San Francisco family, purchased the estate to use as a summer home. Hellman, who emigrated from Germany in 1859, has been in the limelight in recent months thanks to the recently published book “Towers of Gold: How One Jewish Immigrant Named Isaias Hellman Created California,” written by his great-great-grandaughter Frances Dinkelspiel.

Hellman and his wife, Esther, enjoyed the estate — which the Hellmans called “Oakvale” — together for 14 years, until his death in 1920, after which Esther and her children, grandchildren and great-grandchildren used it as a summer home until the late 1950s.

“The family would go over for a good part of the summer. When I was a kid, my sister and I spent a ton of time over there. It was like Shangri-La, just a fantastic place — just sheer pleasure,” said Hellman, 74, a great-grandson of Isaias Hellman.

A few years after the death of Hellman’s grandmother in the late 1950s, the property was sold to the city of Oakland. In 1971, a nonprofit was formed to preserve the property and manage it.

The Hellman family and their Jewish roots is the lost story of Dunsmuir House, said DeMersman, the property’s executive director for the past year.

“For [Dunsmuir] to set ourselves apart, the Jewish American experience is an important one,” said DeMersman, who isn’t Jewish. “Part of our interpretive plan is to start talking about the Hellmans’ experience and how it was different [from non-Jewish wealthy families that owned estates]. That sets us apart and increases interest in the local Jewish historical aspect of this property.”

In addition to the name change, the estate is also going to begin enacting programs and exhibits that emphasize the Hellmans’ Jewish roots and their role in California history.

The Dunsmuir mansion has been featured in many TV shows and movies, such as the James Bond thriller “View to a Kill” and as the honeymoon destination in the Mike Myers comedy “So I Married an Axe Murderer.”

Today the property is mainly used for special events, such as Christmas and Easter celebrations and the annual Scottish High-land Games. It is also available for weddings, b’nai mitzvahs and other special occasions.

Hava Zakharevich, who grew up in Belmont and now lives in Baltimore, had her wedding on the grounds five months ago, and said it was an unforgettable experience.

“We chose it for the beautiful outdoor location that presented a beautiful place to have a chuppah,” she said.

Although Zakharevich was not aware of the estate’s Jewish history, she said she was happy to have contributed to that tradition. “I’m glad I was able to bring some Jewish continuity back to the location,” she said, “and I hope it made the Hellmans proud.” 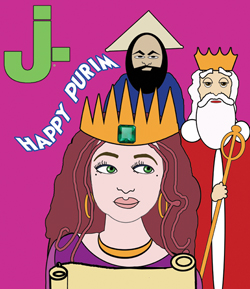