This Shabbat marks the first time that Bryna Kammerman can push her 2-year-old daughter to synagogue in a stroller. It will be the first time, while walking to Shabbat services, that her husband, Jay Edwards, can sling the diaper bag over his shoulder, and their daughter Evelyn can carry her sage green baby blanket

That’s because San Francisco’s Congregation Adath Israel has established the city’s first eruv, in the Sunset District, which means Jews within its perimeter can carry items on Shabbat.

“It’s very exciting — we can all go as a family to shul,” Edwards said.

Torah law identifies 39 categories of work that are prohibited on Shabbat. One of those is carrying anything from a private to a public space.

An eruv, then, expands the private domain and allows Jews to carry within those boundaries.

“If you don’t have an eruv, you can’t take your baby outside of the house on Shabbat. That’s a big deal,” he said. “So an eruv is a statement — that this community is on the map, that it’s actively together, that it’s growing and building an infrastructure for traditional Jewish life.”

Strulowitz and the synagogue’s lay leaders worked on creating the eruv for nearly two years. It was finally approved June 15 by the chief of police and the city supervisors during a brief signing ceremony at City Hall.

The east-west boundaries of the eruv are 20th and 44th avenues. The north-south boundaries are Kirkham and Santiago streets.

In total, Adath Israel received approval for the eruv from the S.F. Department of Public Works, the California Public Utilities Commission, PG&E, the Chief of Police of San Francisco and City Supervisor Carmen Chu.

“I’m very pleased to host the first one in the city,” said Chu, who serves the Sunset/Parkside district.

Staff at the Jewish Community Relations Council helped Strulowitz demystify the eruv for the range of public officials needed to sign off on it.

“It’s a tremendous public service,” said Abby Porth of JCRC. “This enables us to promote San Francisco as a thriving place for Jewish life.”

The eruv required virtually no construction — most of the boundaries are drawn from already existing telephone poles and wires.

The rabbi started looking at those poles and wires about two years ago. He started at the ocean and worked his way east. He never wore a kippah during this process, to avoid any possible suspicion — he didn’t want to spark the kind of dissent Palo Alto–area Jews experienced when they tried to establish an eruv. (It took their community eight years to get the eruv approved in Palo Alto.)

Friday, June 19 marks the first Shabbat that the eruv is operational. Congregants expect the eruv to help unite their community, and allow a more vibrant energy at synagogue. “I’m looking forward to more families showing up,” Edwards said.

Each week, the rabbi or a lay leader will check the perimeter of the eruv to ensure it’s kosher.

That’s when the ancient tradition gets a high-tech gloss: The rabbi will post updates about the eruv on Twitter (www.twitter.com/sunseteruv).

When Strulowitz moved to San Francisco four years ago, there was not a single eruv in Northern California. Now there are four — in Berkeley, Palo Alto, Sacramento and now San Francisco.

“That’s tremendous,” Strulowitz said. “It shows there’s a growing tide of those who want a more traditional Jewish experience.” 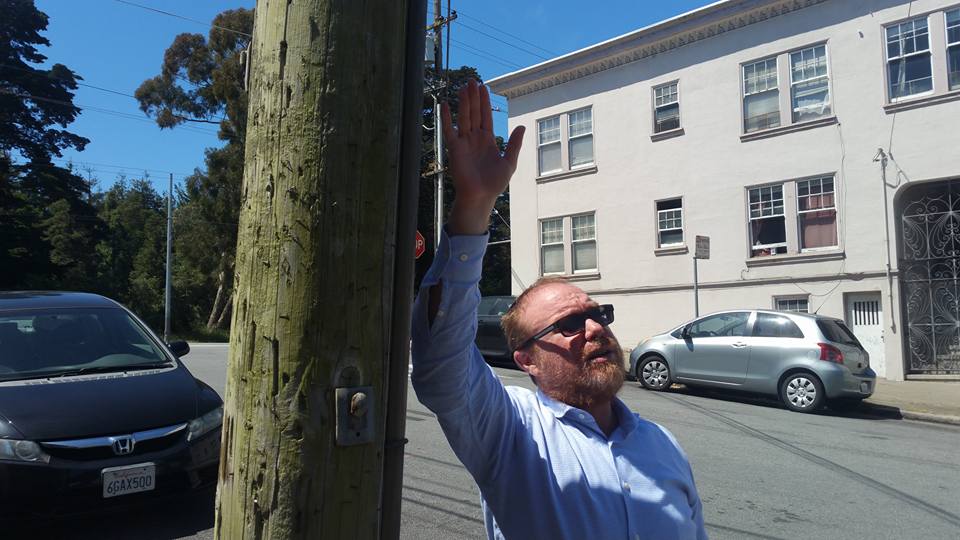