Zayde Bubbe: Hip grandparents wrestle with what to be called

When Alfred Herpe was in his late 50s and first became a grandfather, he wanted a name that would reflect his lifestyle.

“I didn’t feel like an old guy,” he said. “I ride a bunch of motorcycles. I like hot rods. I didn’t want some tag like an old-timer.”

By all accounts, Herpe, now 63, doesn’t fit the stereotype of a zayde, the Yiddish word for grandfather popular among grandparents of baby boomers (Americans born between 1946 and 1964).

The question was, what to be called by the grandkids? It’s the same dilemma facing many Jewish grandparents-to-be these days.

Stephanie Scott with her new grandson, Ever, who will call her “Gaga” some day.

He’s probably right. After all, does a zayde ride in local motorcycle clubs? Does he own the classic 1929 Ford Roadster used in the 1967 film “Guess Who’s Coming to Dinner”? Does he keep antique motorcycles in a shop he built behind his Daly City home?

And does he rev up his red Harley-Davidson and ride to Oregon to spend time with his grandkids?

But then there’s his wife, Myra, who has no problem being called “bubbe” by the grandkids, Samuel, 4, and Zachary, 1.

A 62-year-old retired preschool teacher, Myra said she always wanted to be a bubbe — even if it’s a term that makes her think of an elderly woman with her hair tightly pulled back under a scarf and her wrinkled hands stirring a steaming pot of matzah ball soup.

Despite the old-fashioned moniker, “I’m a cool grandma,” Myra said, noting that she and Alfred do many high-tech things, such as talking to their grandkids on Skype (a program that allows you to make calls via the Internet).

“I’m young at heart,” she said. “I go ice skating with my older grandson and I dress young, but age-appropriate.”

When Myra hears 4-year-old Samuel chirping “bubbe, bubbe” in his high-pitched voice, it’s like music to her ears, reminding her of the time when her own kids were young and called out to their grandma, who is a Holocaust survivor.

Nowadays, Myra’s mother, Esther Jachimowicz, has taken the bubbe name a step further, as her great-grandkids in Oregon call her “Super Bubbe.”

“Being the daughter of Holocaust survivors made me want to carry on family names and traditions that much more,” Myra said. “I thought grandma and grandpa were too Americanized, but my daughter did not like saba or savta. So I became bubbe.”

Other baby boomers Myra knows say being called bubbe word would make them feel old, but that’s not true for her. “It’s a word of endearment,” she said.

At age 59, she considers herself to be a young grandparent, noting that because she and her husband, William, were children of parents in their 40s, they decided they wanted to have children early.

That decision ended up making them grandparents in their mid-50s. Too young for bubbe and zayde? Not at all. Scott said she would have been happy with her grandchildren calling her “Bubbe.”

Her grandson, Callen, however, had a different plan.

“I am Gaga,” said Scott, who works the counter at Gus’ Discount Fishing Tackle in San Francisco’s Richmond district. “I don’t mind it, but of course, I wish I was bubbe. That was my intent before [Callen was] born. Had it been that way, I would have been elated.”

Scott runs the family business six days a week — where recent visitors to the store have been able to see her 8-week-old grandson, Ever, wiggling in his Pack ‘n’ Play. She used to take care of Callen in the store, too, but he recently began attending a synagogue preschool.

“I am my grandchildren’s day-care provider,” Scott said. “By the time [Callen] was through here, he was saying, ‘May I help you’ and ‘Come again.’

“My daughter jokes that my husband and I co-parent because we’re so involved in their lives,” Scott said. “I’m having a great time.” 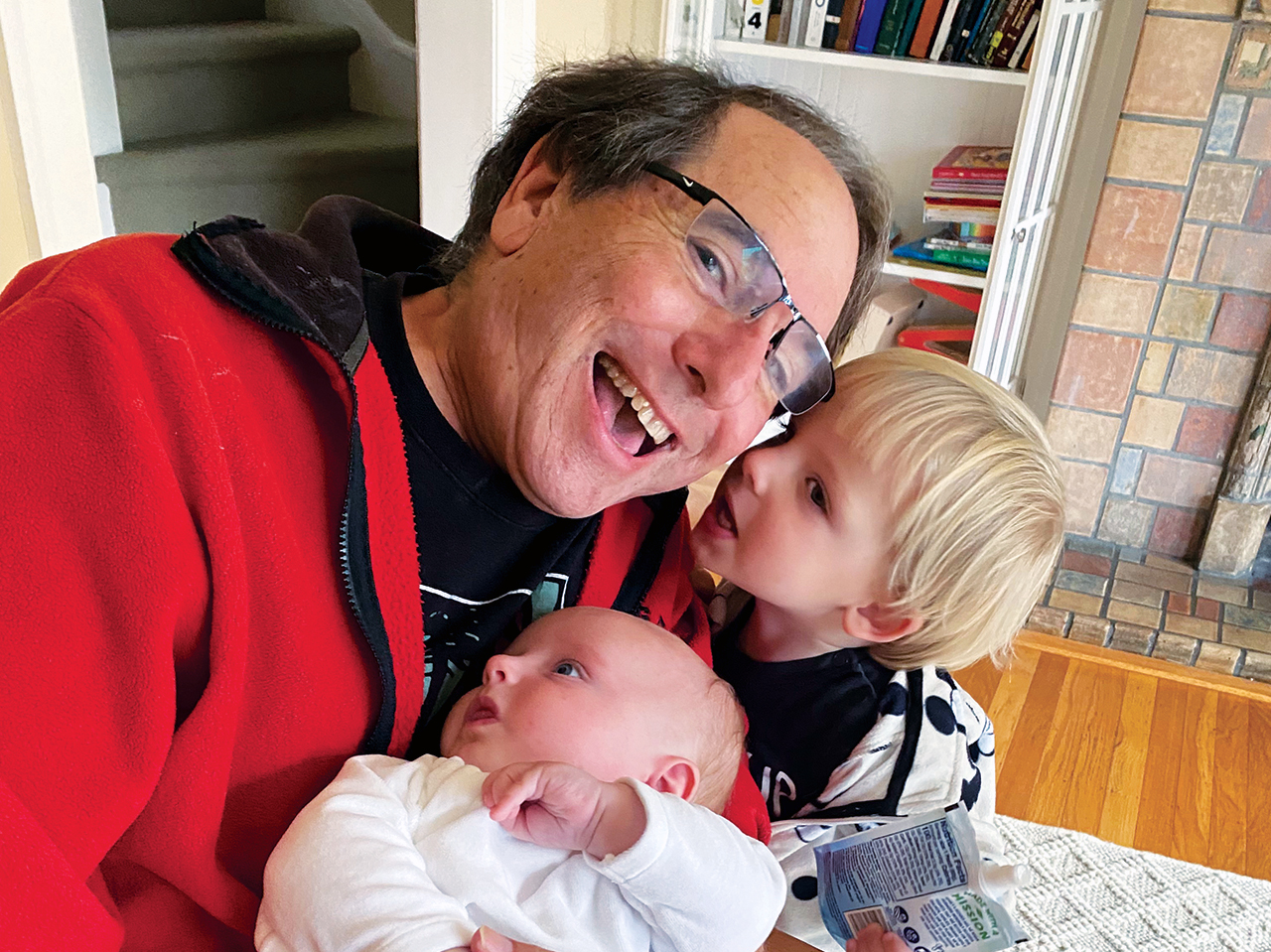