Sixty years of Mad-ness: Retrospective in S.F. affirms magazine was fueled by boatload of Jewish wit

For a gap-toothed, dim-witted dork, Alfred E. Neuman sure influenced a lot of people.

Everyone from “Simpsons” creator Matt Groening to film critic Roger Ebert credit Mad magazine with having a tremendous impact on their careers. Monty Python member Terry Gilliam called the irreverent monthly “the Bible for me and my whole generation.”

With Mad turning 60 this year, San Francisco’s Cartoon Art Museum pays homage with a retrospective. On display through mid-September, the exhibit features scores of original sketches, cartoon panels and magazine cover art (the latter all featuring Alfred the Great himself).

Watercolor painting by Jack Davis was published in Mad magazine in July 1990. ™ and © E.C. Publications, Inc.

Take a look at the names of the artists and writers who put the magazine together, and one can’t help noticing: Most of the Mad brain trust was Jewish.

These guys lampooned pop culture, politics and anything that looked like the conventional wisdom of the times. Long before Bart Simpson started corrupting the youth of America, “Spy vs. Spy” and “The Lighter Side of …” were getting the job done.

“It felt naughty,” said Michael Capozzola, who is Jewish and a member of the Cartoon Art Museum advisory board. “It had this degree of wolfishness and was very of the moment.”

It all started for the 40-something Capozzola on a family vacation to Mystic, Conn., when he was a mere lad. He saw for sale a copy of Mad with a Star Trek parody on the cover. “My mom snatched it from me,” he recalls, “and she said, ‘Oh, no, no, no!’ ”

His fledgling passion for Mad increased when a neighbor down the street threw out what Capozzola calls “a metric ton” of back issues to punish his wayward son.

That kid’s loss was Capozzola’s gain. He took home the discarded magazines and was hooked.

Today, Capozzola’s day job is doing standup comedy. One of the brightest feathers in his cap, however, is the writing credit he got in a 2005 issue of Mad for a piece titled “Yoga for Smokers.”

Cartoon Art Museum curator Andrew Farago says he put the exhibit together thanks to loans from avid collectors. Most of the vintage drawings were sold off by the late Mad publisher William Gaines, who retained ownership.

James Warhola’s painting appeared on a Mad paperback in the 1980s.

“We’ve done other Mad shows,” Farago noted, “but nothing this comprehensive.”

As for Mad’s Jewish backstory, Farago couples it with the bigger story of comics in America. “If you remove the Jewish creators from the American comic book industry, it doesn’t exist,” he says. “The language in Mad often had Yiddish.”

That showed up in the occasional Yiddishism — from “shmuck” to “shmendrik” — that slipped in between the lines.

Contemporary comic book artist Al Gordon took in the exhibit one recent Friday, admiring various panels and expressing his indebtedness to Mad. He’s still reading it, though it has gone from a monthly to bimonthly and now accepts ads.

“I’m a total pervert because of Mad,” Gordon says. “From issue one, it’s not just funny, it’s sick. It was the stuff you laughed at as a kid and the stuff your mom laughed at when you walked away.”

Gordon grew up the son of a Jewish immigrant who stowed away on a boat sailing to New York a century ago. He grew up in a Yiddish-speaking home, but like many first-generation Americans, he turned his back on the shtetl world of his parents and embraced American culture.

That included comics and Mad magazine.

“Mort Drucker is the best caricaturist who ever lived,” he proclaims of the Mad artist who mocked the television shows of the ’60s and ’70s. “Jack Davis was the greatest inker who ever lived.”

Most of Mad’s old guard has died, with the exception of Al Jaffee, the Lithuanian Jewish genius who created the back-page fold-in cartoons. At 91, he’s still on the job after 57 years. “Serious people my age are dead,” he once quipped.

For the unserious, the Mad exhibit will be up on the walls of the Cartoon Art Museum until the end of summer. 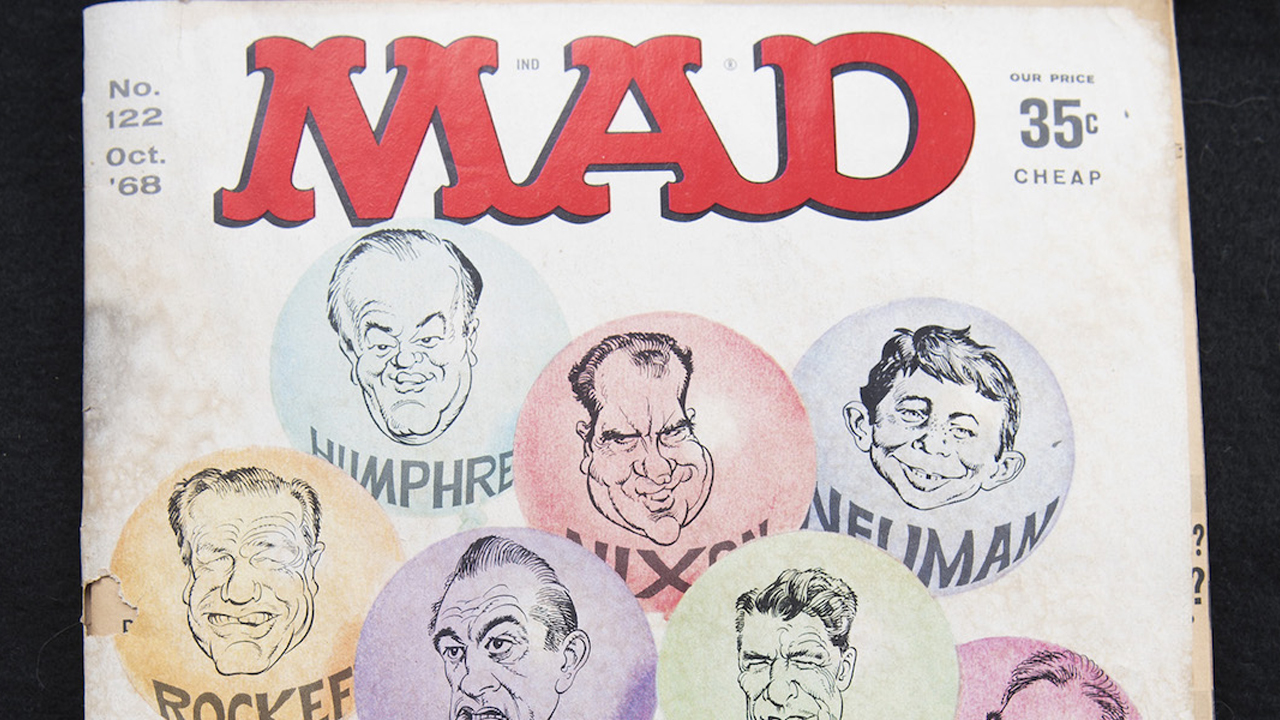 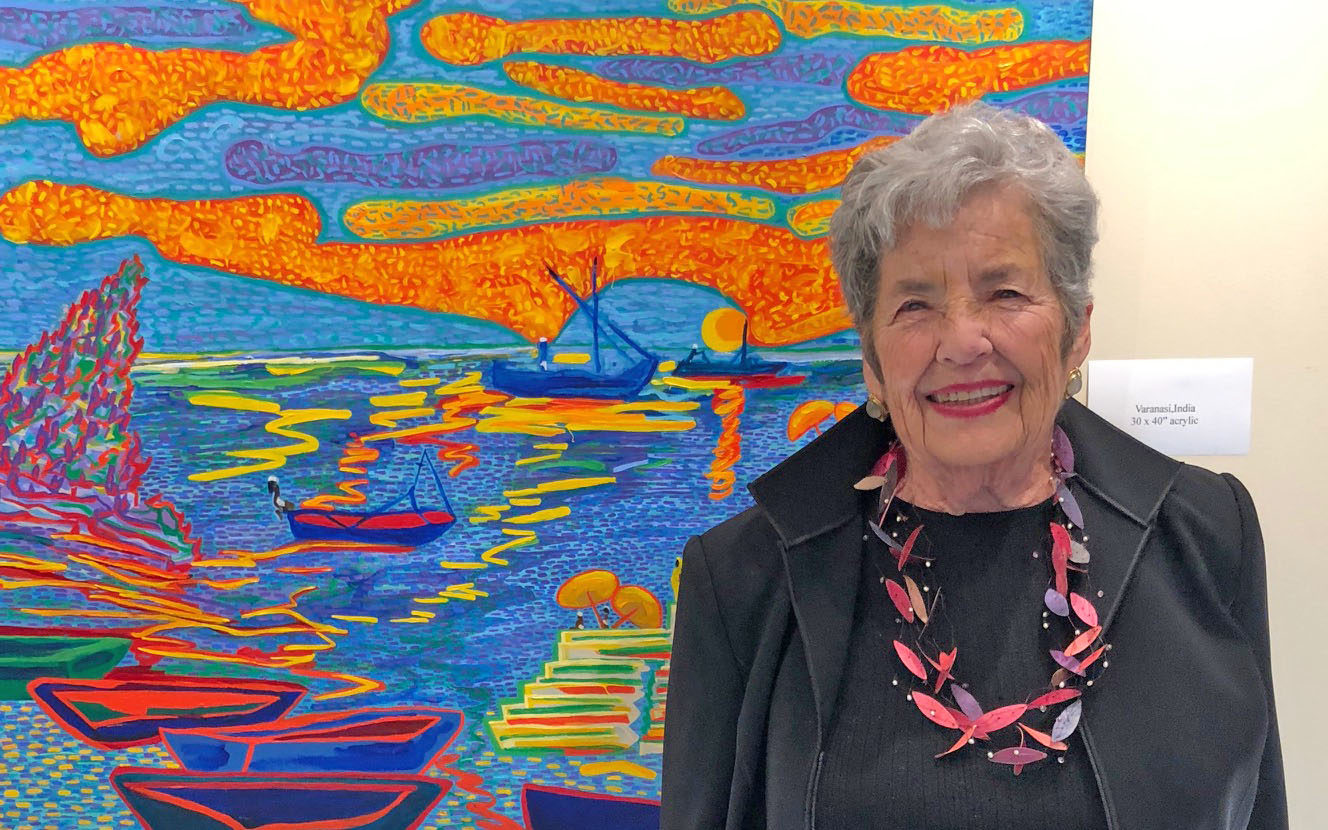