“Mr. Selfridge,” a PBS Masterpiece series, premieres at 9 p.m. Sunday, March 31. Jeremy Piven, 47, stars in the title role, based on the life of Harry Selfridge (1856-1947), a Midwesterner from a poor family who left school at 14. Selfridge had luck, pluck and talent, managing to amass a fortune as he climbed the executive ranks of the Marshall Field department store. In 1906, Selfridge and his heiress wife visited England, which he correctly guessed was ready for a top-tier department store. The first Selfridges opened three years later and was a smashing success, and the department-store chain prospered for decades.

Piven played the hyped-up Jewish talent agent Ari Gold in HBO’s “Entourage.” Although Selfridge was not Jewish, Piven’s performance bears some similarities to the Ari role.

The BBC America mini-series “Spies of Warsaw” airs at 9 p.m. on two consecutive Wednesdays, April 3 and 10. Based on the acclaimed novel of the same name by Alan Furst, 71, the series follows Col. Jean-Francois Mercier (David Tennant), a World War I hero, who in the years leading up to World War II is drawn into a world of abduction, betrayal and intrigue in Warsaw. Along the way, he has a torrid and sometimes dangerous romance. Mercier’s bohemian sister has a Jewish jazz pianist boyfriend, and Mercier takes under his protection two Soviet Jews who have defected (one is played by English actor Allan Corduner, 62).

In TV news stateside, Anna Faris will start work next month on a sitcom pilot, playing a newly sober mom and waitress in the Napa Valley. While most TV pilots don’t get on the air, this one almost certainly will because it is a project of Chuck Lorre, 60, the successful sitcom creator (“Two and a Half Men,” “Big Bang Theory,” “Mike & Molly,” “Dharma & Greg”).

The Jerusalem Post reported on March 9 that Austrian actor Christoph Waltz, 55, who just won his second best supporting actor Oscar, was going to be in Israel the following week to attend the wedding of his daughter Miriam, 30. The Post also reported that “Waltz’s son is a rabbi in Israel.” In 2009, director Quentin Tarantino surprised everyone when he said the same thing, and not long after, actor-director Eli Roth said the son was “studying to be a rabbi in Israel.”

A recent Austrian news report clarified the matter. Waltz’s ex-wife, Jackie, is an American Jewish psychotherapist. They had three children: Miriam, Leon, 27, and Rachel, 25. The Austrian magazine spoke to Vienna Chief Rabbi Paul Chaim Eisenberg, who knows Leon (he is often in Austria to visit his paternal grandmother). He said Leon did finish a multiyear course of study at a Jerusalem yeshiva. But at the end of his studies Leon chose not to be ordained.

Leon, who is Orthodox, is a scientist in London. He is also writing Jewish historical studies. The chief rabbi added that Leon and his father are close, but that Leon couldn’t bear to watch his father act in an SS uniform in Tarantino’s “Inglorious Basterds.”

In other progeny news, film director Rebecca Miller, 50, has published her first novel, “Jacob’s Folly.” The daughter of the late Jewish playwright Arthur Miller is married to three-time Oscar winner Daniel Day-Lewis (“Lincoln”), 55. Neither identify as Jewish. Here’s the novel’s unique plot: An 18th-century Parisian Jewish peddler wakes up to find himself reincarnated as a fly in 21st-century America, able to influence the lives of a fireman and a young Orthodox woman.

Miller told Glamour magazine that researching the novel prompted her to study seriously, for the first time, Judaism, Jewish history and Jewish folklore. 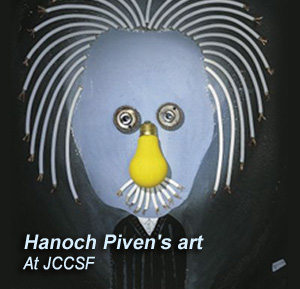