Two mothers were talking at a Brandeis Hillel Day School event last winter in San Francisco when they stumbled upon a coincidence: Both of their families were planning to visit Europe at roughly the same time for the same special reason.

Those trips occurred this spring — one to Germany and one to Austria.

Günter Schönenberg (left) the day before he left Germany in 1938, with his mother, Selma, and sister, Erna

Both families attended dedication ceremonies for the laying of stolpersteine (German for “stumbling stones”) in front of  the homes of their ancestors before the Holocaust.

Stolpersteine are brass plaques with biographical information that are placed in the sidewalk in front of the last address of Nazi victims. The plaques can be found in more than 600 places in Germany, Austria, Hungary, the Netherlands, Belgium, the Czech Republic, Norway and Ukraine.

The project is supported by local communities in Europe that view it as a small way to memorialize their Jewish former neighbors.

Both San Francisco families had unique stories leading up to the visit.

Jacqueline Shelton-Miller, for example, would not have known about the stumbling stone in front of her father’s family home in Gelsenkirchen, Germany, had it not been for a mysterious email from a Dutch woman.

The stones for the Schönenberg family

In her email, the woman explained how she was preparing an exhibition of photographic portraits taken by Annemie Wolff-Koller in 1943. A non-Jew, Wolff-Koller had come to Amsterdam from Munich with her Jewish husband and set up a photography business. When the Nazis entered Holland in May 1945, the couple attempted suicide, with the husband succeeding. Toward the end of her life, Wolf-Koller destroyed all of her negatives — except those from 1943, which were recently discovered.

Many of the people in the photographs were wearing Stars of David.

“No one is sure what the photographs were for,” Shelton-Miller said. “They might have been connected to the resistance, possibly for false identification papers.”

One of the men in the photos, a fair-haired, light-eyed young man, was thought to be Günter Schönenberg (later George Shelton). His mother and sister were killed by the Nazis.

Shelton-Miller was contacted to confirm whether it was indeed her late father, and during that inquiry, she learned that a stolpersteine was going to be dedicated in front of his former home in Gelsenkirchen.

Around the same time, Rabbi Ruth Abusch-Magder heard that a stolpersteine was going to be placed in front of her ancestors’ home in Vienna. However, she never would have known about it had her mother, Dr. Edna Magder, not been looking into her family’s history for the past decade.

Due to work commitments, Abusch-Magder, the rabbi-in-residence at the community-building agency Be’chol Lashon, was unable to attend the ceremony. But she didn’t want her children, Oren, 15, and Aliza, 12, to miss it, so she allowed them to skip a few days of school — at the Jewish Community High School of the Bay and Brandeis Hillel, respectively — so they could take the trip with their grandparents.

Shelton-Miller’s children, Aaron and Joshua, at the Schönenberg stolpersteine ceremony in Gelsenkirchen, Germany on April 29

Abusch-Magder had visited the building on earlier trips but had never been able to go inside the apartment. However, Oren and Aliza were actually invited inside, getting to see where their great-grandmother Lizzi Brodi had grown up before leaving for pre-state Israel in 1932.

The interior has been completely updated, leaving no hint of its pre–World War II condition. However, the impressive spiral staircase in the building’s hallway has remained unchanged, giving the children a sense of the past.

“It was really important for my kids, who are removed from this by several generations, to see the place for themselves, to have a context for where we come from,” Abusch-Magder said.

“It was an incredible experience, one I will remember for the rest of my life,” Oren said. “What we did there was very powerful, and it brought me closer with my grandparents and my sister.”

Dr. Edna Magder and her grandchildren Aliza (front) and Oren (middle) in front of their family’s home in Vienna

Shelton-Miller took her sons Aaron, 10, and Joshua, 7, with her to Germany, and then on to the Netherlands to see the places where her father lived after leaving Germany in 1938 — such as a kibbutz-like farm that prepared young Jews for aliyah to the land of Israel.

In her remarks at the stolpersteine dedication, Shelton-Miller emphasized the importance of remembering how Jews lived, and not only how they died.

“As I stand here … where my father spent the first 17 years of his life, I think about what it means to have a home, a place you are from, and a national identity,” she said. “Where he grew up, a home filled with love and laughter and music, with people he loved, smells of food, a business, Jewish life and holidays. Even though it was never his home again after August 1938, he carried it with him his entire life, inside.”

For young Aaron, who plans to come back and see the stolpersteine again, it wasn’t only about the past.

“It will always be there, and I will be able to see it in the future,” he said. 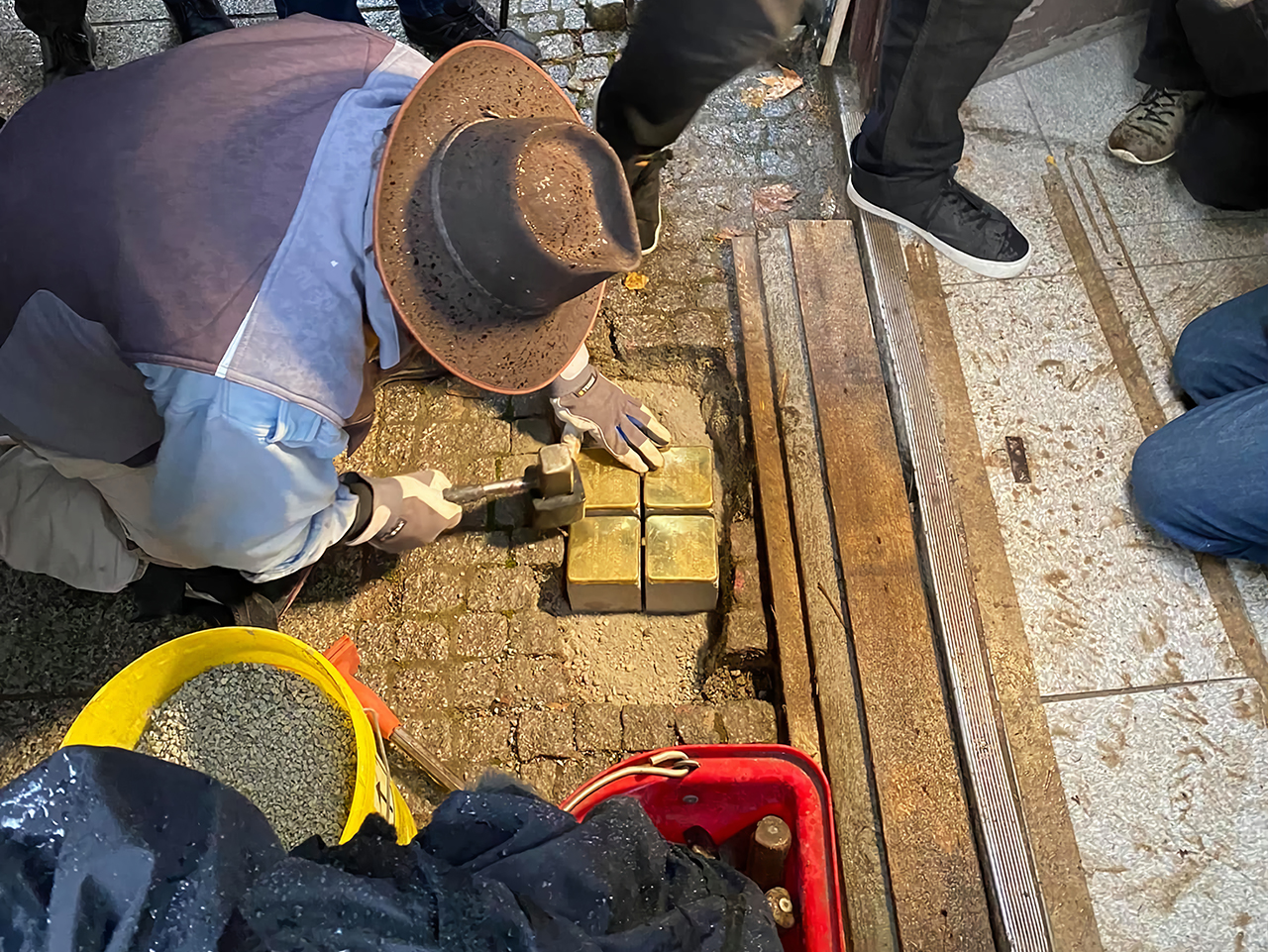