Of all the things teenage girls are into, being a kosher supervisor isn’t one of them. Unless you’re a student at Meira Academy, an all-girls Orthodox high school housed at the Oshman Family JCC in Palo Alto.

Recently, the café at the JCC began serving kosher sushi — and it’s the girls of Meira Academy who are behind it.

No, they haven’t become sushi chefs. However, they have become experts in kosher supervision and are overseeing the preparation of the sushi by a professional sushi chef. The girls’ job is to make sure the Japanese fare meets strict kashrut standards.

And how did this come about? In large part, it’s because the students at 2-year-old Meira Academy had never been able to eat lunch at the JCC’s non-kosher café.

“It really bothered me that the girls couldn’t buy lunch, that they couldn’t feel completely at home on their school’s campus,” said Rabbi Joey Felsen, executive director of the Jewish Study Network and founding president of the school.

This summer, it occurred to Felsen that having the school partner with the JCC would accomplish several things at once: bringing a kosher option to the Café on the Square, educating the girls about the laws of kashrut and serving the local Jewish community.

“This really turns Meira Academy from renters to part of the community,” noted Randi Brenowitz, the JCC’s chief human resources officer. “And what’s great for the girls, is it integrates their learning with their doing.”

The sushi is being sold by Haute Cuisine, the company that has the concession at the café, and this operation is different than what’s going on at the JCC of San Francisco, which recently has begun selling kosher sushi from L’Chaim Sushi.

In Palo Alto, the Meira Academy students volunteer their time in supervising the sushi’s preparation, and they take no financial cut of the profits.

“It really just takes five minutes of our day, but we are making a real impact on the community,” said 10th-grader Judith Sherbin. “Sure, we’re partly motivated by self-interest. Having the kosher sushi available is good for us and our teachers. But we really look at it as though we are supplying something to the wider Jewish community.”

So far, seven of the school’s 18 students have been supervising the sushi preparation on a rotating basis. Although there are a small number of female **mashgichim (kosher supervisors) around the country, Devorah Lewis, Meira’s Jewish studies principal, is fairly sure that no other Jewish girls high school has such a program.

Learning what to look out for is not hard for the girls, all of whom come from kashrut-observant homes. Tenth-grader Chana Crystal’s father is a kosher supervisor and the manager of a kosher deli in Denver. “We’re all pretty knowledgeable and know what to look for,” she said.

The girls don’t actually order the fish, but they have other responsibilities. For example, 11th-grader Sarah Spiro has checked shipments for kashrut certification markings, made sure all the ingredients that will go in to the sushi are kosher and plugged in the rice cooker. (In a kosher kitchen, a Jew must turn on the oven or other source of heat for cooking.)

So far, diners can choose from vegetarian rolls, tuna rolls, salmon rolls and Philadelphia rolls, ranging from $7 to $10.

“It’s been selling out every day,” Sarah said proudly. “The kids from Kehillah [Jewish High School] from across the street like it. So do the people coming from the gym.”

Will the girls start branching out to other kosher foods?

“Right now we’ll just stick to sushi,” Sarah said as she ran off to class. 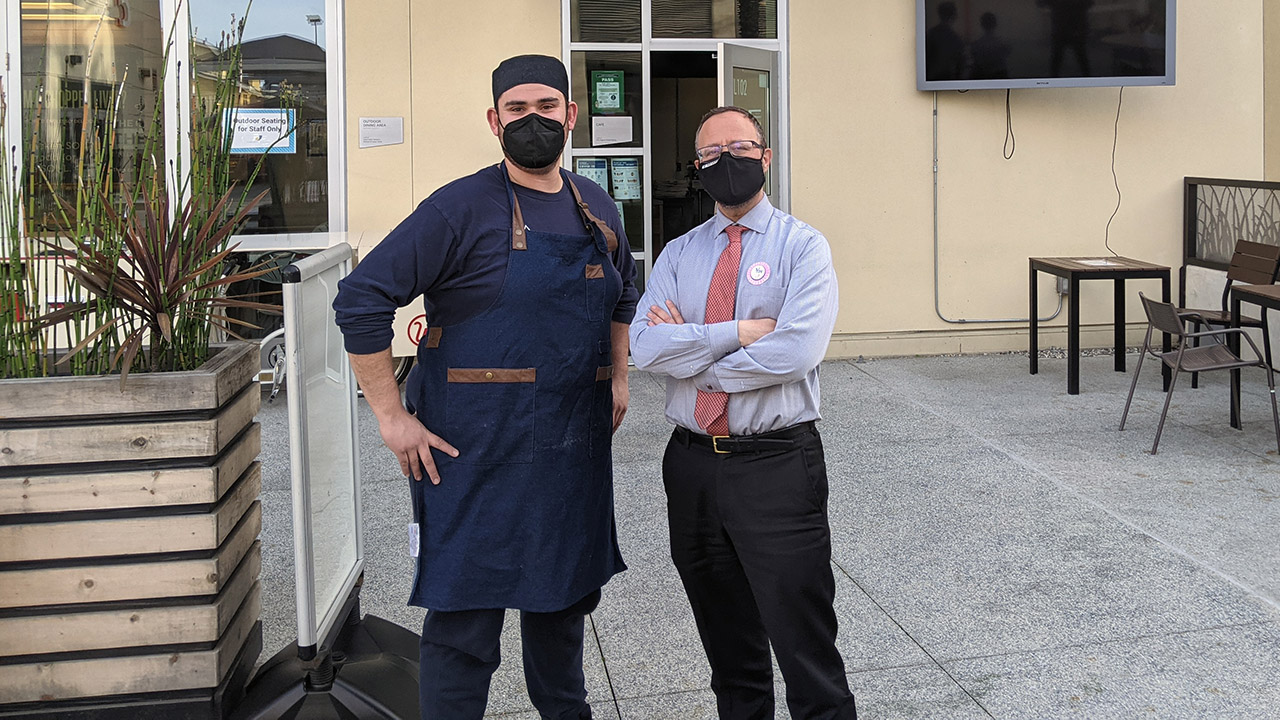