Talking with An animal lover and educator

J.: What animals do you find most interest kids?

Blair Bazdarich: I specifically love talking to kids about animals and conservation because you can really get a bug in their ear about what makes wildlife so great and how we can help it. I always like to bring out animals that were at one point so endangered that they were almost extinct, but have made a comeback, like the American alligator. I bring out a baby one, which the kids find amazing.

I also like to bring out snakes, because if a kid who is afraid of snakes can touch one, that’s really great. I also love to bring animals that kids have never heard of before, like armadillos.

J.: Have you always been interested in animals and wildlife conservation?

BB: I was born and raised in the Sunset District, and I started going to the San Francisco Zoo when my mother was pregnant with me. I began volunteering at the zoo when I was 13, then had an internship at the zoo the summer after high school. While I was at Sonoma State getting a degree in biology with a concentration in zoology, I worked at the zoo’s summer camps, and on weekends during the school year as a guide for its overnight programs.

J.: How have you tuned your passion for wildlife into a career?

BB: After college, I went to work at the San Francisco Zoo doing its zoo-mobile program, and I was also a zookeeper for a couple of years. This past July, I took the position of K-12 outreach coordinator at the Aquarium of the Bay. I felt I needed to get back into doing education, which I feel is my calling and my cause. I put down the poop shovel, as it were, to go back to my roots.

With the tapirs at the Jerusalem Biblical Zoo

J.: How did you land an internship at the Jerusalem Biblical Zoo last year? And was it your first time in Israel?

BB: It was my second time in Israel. I went on a Birthright Israel trip the year before. My mom is Jewish and my dad is Catholic. I have been very close to my mother’s family, especially my grandmother, my bubbe, and I went on the trip as a dedication to her. She passed away a few years ago, and I didn’t get to tap in to her about Jewish faith and history as much as I would have liked to, so I went on the trip to learn.

I came back and all I could think about all day, every day was Israel. Then someone from Real Life Israel [an internship program] called me and told me they could get me an internship at the Jerusalem Zoo. That very day I decided I would go to Israel for six months.

J.: How is zookeeping different in Israel?

BB: I got to work with a lot of animals I had never worked with before. My species vitae — my list of species I have ever worked with — doubled in size in just five months!

I did monthlong rotations through different departments at the Jerusalem Zoo, and the staff really took me under their wing. Nothing is done exactly the same in Israel as in America. Here, there are animals that we don’t go into a common space with, or work hands-on with. In Israel, the zookeepers just go into the animals’ spaces and do their job.

I was reaching about six or eight feet from a hippo with no fence in between us. It could be very dangerous, but that’s the way they have been doing it forever in Israel, and it’s pretty safe. I did things they never would have let an unpaid intern do in America. I was able to jump in and be a zookeeper among people who had been doing it at this zoo for years.

J.: You have also been back to Israel as a counselor for Birthright Israel. Has Israel now become very important to you?

BB: I don’t think I could have picked Israel out on a map before going on that first trip. Birthright Israel essentially changed the course of my life. I didn’t feel comfortable calling myself Jewish before I went to Israel. I had this feeling that I wasn’t “Jewish enough.”

By submersing myself in Israel’s culture, where there are so many shades of being Jewish, it opened my eyes to the idea that if you think you’re Jewish, that’s all that matters. Israel will always be a part of my identity now. It will always be part of my future plans. I‘ll definitely go back. I’m not convinced I’d want to live there permanently, but I’ll always be planning my next trip to Israel. 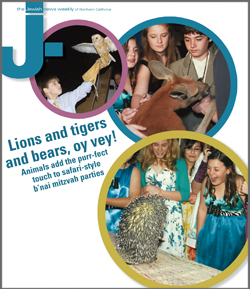