It very well could have been the kind of seder where the bitter herbs were blessed … and then rolled into a joint and smoked. But it wasn’t. Yet it definitely differentiated itself from all other seders by having the Passover story read by a member of the Grateful Dead.

And then, after the tables were cleared, guests rocked out to a two-hour set.

About 150 people attended the first seder at Terrapin Crossroads in San Rafael on April 21, the final night of Passover. Judging by the feedback of both guests and organizers, it certainly won’t be the last.

Terrapin Crossroads, a music venue and restaurant, was opened in 2012 by Phil Lesh, the Grateful Dead’s bass guitar player, and his family: wife, Jill, and sons, Brian and Grahame. It was built as a place for Lesh to play when he isn’t on the road, and where he can play music with his sons. It’s also a welcoming performance space for bands that fit into the Dead’s mold.

But another reason it was built, Lesh said, was to build community.

Ross James, a guitarist who regularly plays there, said the seder grew out of a menorah-lighting held at Terrapin last November. Chanukah drew such a crowd, that when it came to Passover, “We felt like we had no choice,” James said.

Jewish regulars at the venue quickly formed a committee. They put together a haggadah culled from numerous sources, and even had input on the night’s set list.

“I hadn’t celebrated Passover in awhile,” James said, “and I think there are a lot of people here who haven’t. But this gives a nice alternative way to celebrate and be together.”

The seder began with Terrapin regular Jeannette Ferber, a cantorial soloist, asking people to call in the spirits of departed ancestors. She invoked the spirit of Bill Graham, the music promoter and friend of the Dead who died in a helicopter crash in 1991, noting that the seder would have appealed to him.

Ferber, who sings at Chochmat HaLev in Berkeley, led most of the seder, and later sang “Hallelujah” (Psalm 150) with the Terrapin Family Band (the performance can be seen at www.tinyurl.com/ferber-terrapin).

The meal consisted of matzah ball soup, brisket, vegetables, cauliflower kugel and macaroons donated by Grand Bakery in Oakland. Of course, bakery owner Bob Jaffe and his wife, Lori, were in attendance, given it was Jaffe’s one week off a year.

The musicians for the two-hour set were Lesh, his son Grahame, James, Dan “Lebo” Lebowitz and two drummers. Fans were up and dancing to the array of songs, including “Exodus,” “Go Down Moses,” “We Shall Overcome,” and Dead songs “Samson and Delilah” and “Touch of Grey” — with everyone chanting “We will survive” during the latter.

Many in attendance expressed feeling euphoric that people could so easily transition from Jewish ritual to Dead show — in the same community and without changing venues — and so fully integrate both their Judaism and their Deadhead spirit.

Steve Enzer of Sausalito said he hadn’t celebrated Passover in awhile, but this seder drew him in. “This is affirmation of family and liberation and building the kind of community we want to live in,” he said.

Judy Frumkin of San Rafael has been in the area for less than a year, having moved from Syracuse, N.Y. After attending Chanukah and Passover celebrations at Terrapin with her granddaughter, she said, “It’s a great vibe. I would join this ‘synagogue’ in a heartbeat.”

Lesh, who isn’t Jewish, was deeply moved by the evening, as well. He told J. that he first celebrated Pesach when his sons attended a Waldorf school, where all students’ traditions are honored and celebrated. (Seders sometimes occurred among the Dead’s crew back in the day, but the band usually didn’t participate.)

Going by the Waldorf model, Lesh said, “We want to honor all traditions of our fans — as what is community without its traditions and world view?”

Along with others, Lesh said he has noticed a disproportionate number of Jewish Deadheads over the years. Now there’s a Facebook page called “Jews for Jerry [Garcia],” and, added Lesh, “Even in our Terrapin Nation, there’s a huge preponderance of them.”

Lesh was visibly choked up when he thanked attendees at the end of “Touch of Grey.”

“Who knew you could have so much fun at a seder?” he asked. “Words fail me.” 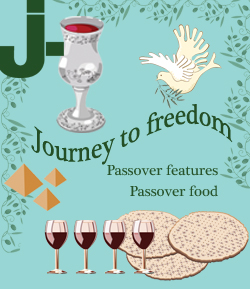