Tel Aviv Pride gets a big splash of California

A high-profile California contingent contributed to the size and impact of the weeklong LGBT Pride Celebration in Tel Aviv last week, with Los Angeles and Bay Area leaders staging events aimed at strengthening the standing of Israel’s gay community.

“But it has grown exponentially. Now Tel Aviv is an international gay destination, with more Europeans, Americans and people who aren’t Jewish visiting Israel for the first time to participate” in the celebration, Simkhai said.

When Simkhai discovered that Jared Fliesler and Geoff Lewis, two friends from the Bay Area venture capital world, were also heading to Tel Aviv Pride, he decided to organize an LGBT tech meet-up to give young Israeli entrepreneurs a forum in which to network and learn from American colleagues.

Simkhai promoted the event on his app, and in less than three hours the meet-up on the terrace at Brown’s — a posh boutique hotel — was oversubscribed with gay tech entrepreneurs eager to pitch ideas to successful California counterparts.

“It is wonderful to come back to Israel and see the visibility of the young LGBT community,” Simkhai said. “The next generation is so comfortable. It just wasn’t possible when I was coming out.”

An estimated 180,000 people turned out for the June 12 LGBT Pride Parade in Tel Aviv, up from 130,000 in 2014. It is the largest gay pride parade in all of Asia and the Middle East, and Todd Shotz of Los Angeles was one of the thousands.

“I come to Israel every year to officiate services for my students,” said Shotz, a film and TV producer who also runs a b’nai mitzvah training business called Hebrew Helpers. “But when I was at the AIPAC conference in March, I ran into Arthur Slepian, who insisted I come again for the summit of LGBT leaders he was organizing in Tel Aviv.”

Slepian is the executive director of A Wider Bridge, an S.F.-based organization founded to promote ties between LGBT communities in North America and Israel. The Tel Aviv summit, titled “40 Years of Pride,” was held June 9-11.

Los Angeles attorney Jennifer Pizer, law and policy project director for Lambda Legal’s Western regional office, presented at a panel at the summit examining how the LGBT community has moved from sexual expression to making family rights its main issue.

She also marveled at the Tel Aviv Pride parade, which had a transgender theme this year.

“This march is just enormous. It goes on and on, and, yes, there are lots of LGBT people who came from all over Israel and Europe,” she said. “But a huge proportion of this crowd is straight people who are supporters.

“I think the vigor and exuberance of the Pride march in Tel Aviv echoes the popular vote on marriage in Ireland,” she continued. “I don’t think that is just a reflection of support for gay people, but also a strong statement of support for the idea that everybody should have an equal place and be free to live according to their own conscience.”

Shervin Khorramian, an Iranian Jew who lives in Los Angeles, sees the Tel Aviv Pride parade as a beacon of light throughout the region.

“I am very proud to say that my Jewish culture has done this in the Middle East,” Khorramian said. “It’s my hope that I will live to see a parade like this in Tehran during my lifetime.”

Jacob Wirtschafter is a freelance writer. A longer version of this piece appeared in the Los Angeles Jewish Journal. 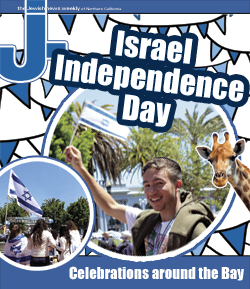