Every last drop: At Ben-Gurion University of the Negev, no water-saving idea is wasted

sde boker, israel  |  Amit Gross is a modern-day alchemist. But instead of turning lead into gold like a medieval sorcerer, Gross turns human waste into water — water pure enough to make the desert bloom.

“We need to treat waste as a resource,” says the Israeli professor, “and not as waste.”

From his Negev Desert base, Gross shows off a model biowaste recycler, which chugs away in the lobby of the Zuckerberg Institute for Water Research, where he teaches environmental engineering.

His machine resembles a high school science project gone wild. A biowaste digester filters human waste via natural processes, without chemicals. But it doesn’t stop there: The recycler also uses filters to trap toxic ammonia gas, ionizing it and folding it into a liquid that ultimately is suitable for irrigation.

Gross is one of many Israeli scientists devoted to discovering advances in water technology. In a region that averages less than 4 inches of rain annually, nothing matters more than making every drop count, even if that drop originated in a toilet.

That’s a lesson Gross and his colleagues at Ben-Gurion University (which established the Zuckerberg Institute) said they hope drought-plagued California can learn.

Each of Israel’s leading universities devotes resources to water tech, but given its desert location and focus on drylands science, Ben-Gurion University is in an optimal position for experimentation and innovation.

The place is scorching hot and bone dry, yet buzzing with scientific inquiry, especially when it comes to water.

“Why water?” asked Noam Weisbrod, director of the Zuckerberg Institute, one of several centers located on the Sde Boker campus. “Expectations are water will be a bigger and bigger issue. A United Nations report predicts that by 2050, 45 percent of the world’s population will live in countries chronically short of water. With more industry, more pollution, increasing salinity, climate instability and more people living in dry lands, all predictions are it’s going to be worse.”

With 20 faculty members and 70 graduate students, the Zuckerberg Institute “is responsible for the next generation of water researchers and water scientists,” Weisbrod said. “Seventy-five percent of Israel is dry land. The only way we can establish this nation is providing enough water everywhere.”

“The western U.S. is using the knowledge accumulated here at universities and industry to solve water problems there,” Weisbrod said.

Israel is not California. The Jewish state has a centralized water authority that has jurisdiction over all water usage in the country. The Golden State operates under antiquated laws that date back more than a century, when seemingly unlimited water and private property rights flowed together in a mighty stream.

That’s all different now. El Niño 2016 was a bust. After more than five years of drought, California has instituted monthly water conservation targets, with some municipalities levying fines on water wasters.

California’s $70 billion agriculture industry, as well as state and municipal government, turned to Israel for help. An Israeli-built desalination plant opened near San Diego last October. Israeli water experts, including BGU academics, have visited the state, advising on best practices when it comes to water conservation.

And sometimes they make strides.

BGU announced last month that it has partnered with Netafim, Israel’s largest drip irrigation company, and with the 17,000-acre Conaway Ranch in Yolo County to develop a commercial rice crop that grows with drip irrigation rather than with conventional flood irrigation.

Given the demand agriculture places on California’s water supply, these are the kind of innovations needed in a state facing ever more water insecurity.

“We’ve outlined the testing procedures necessary to maximize success, based on experience growing a variety of crops in arid climates using subsurface drip irrigation,” said Elon Adar of the Zuckerberg Institute. “We are pleased to be playing a leading role, providing knowledge and expertise to help California farmers reduce their water consumption.”

“We believe this represents the first use of drip irrigation in the U.S. for a rice crop,” said Kyriakos Tsakopoulos, president of Conaway Preservation Group, which owns Conaway Ranch. “This effort could serve as a model for other farms and potentially save hundreds of thousands of acre feet of water in California if widely adopted.”

To make sure every drop counts, BGU researchers are also developing crops that can thrive on less water and tolerate brackish water.

Naftali Lazarovitch of BGU’s French Associates Institute for Agriculture and Biotechnology of Drylands deals in brackish water. He studies drip and saline-water irrigation, and also helps nearby farmers find ways to grow produce in the hottest, driest places on Earth.

“There are greenhouses in the Arava,” he said, referring to Israel’s other great southern desert, “where they grow bell peppers for export. We have good seeds and good farmers, but very bad soil. It’s stony and saline, so we use an old trick.”

It’s called a capillary barrier, in which a gravel layer is placed beneath the plant’s root zone. Adding sandy soils and volcanic ash gives higher yields, even in the desert.

Lazarovitch said his colleagues also use aeroponics to grow tomatoes without any soil at all — just a mixture of water and fertilizer placed in contact with the root.

One of BGU’s leading tomato experts is Aaron Fait, an Italian-born professor who studies plant metabolic behavior. He crossbred wild tomatoes with commercial varieties to create a product that tolerates the harsh Negev conditions.

He also has developed grape-growing techniques for the burgeoning wine industry in the Negev, where heat, salinity and sandy soil create challenging growing conditions. To conduct his studies, Fait established a living wine lab in Sde Boker that generates just 15 liters each year.

“Winemaking in Israel is 6,000 years old,” Fait said. “Today Israel produces 36 million bottles of wine a year. Here we use rootstock adapted to salinity. These are plants in constant suffering, so we experiment with shading nets on the grape clusters.”

He believes his research could help California’s wine industry as the drought drags on.

“I have visited California,” Fait said. “They have fantastic product, but it’s not sustainable with climate challenges. Growing vines in the desert can be a laboratory to test new strategies of irrigation, fertilization and [grape] cluster shading.”

Recycled wastewater is a pillar of Israel’s long-term water strategy. Every day, 400,000 cubic meters of raw sewage from the greater Tel Aviv region is purified at the massive Shafdan wastewater treatment plant, then piped south for irrigation.

Just don’t drink it. As clean as the wastewater may be after treatment, it is not potable. For drinking water, Israel turns to the Mediterranean and desalinated seawater.

Its newest desalination plant is the Sorek Project, which opened its spigots in late 2013. Located just south of Tel Aviv, Sorek is the world’s largest reverse osmosis seawater desalination facility, processing 624,000 cubic meters per day, enough to quench the thirst of 1.5 million people.

To handle the volume, seawater is squeezed at high pressure through 16-inch cylindrical membranes, separating salts from H2O. The process is so efficient, just two employees can manage the entire site on weekends.

That’s under optimum conditions. In desalination, too often things become insane in the membrane.

A process known as biofouling, which causes algae and bacteria to form on those membranes, creates inefficiency and damage. It’s a problem that has stumped engineers since the advent of reverse osmosis desalination, and one that BGU scientists have been working to resolve.

Moshe Herzberg of the Zuckerberg Institute studies biofouling and ways to circumvent it. The subject matters to him because, as he noted, “One billion people do not have access to clean drinking water,” and desalination, though expensive, is one of the best solutions, especially for dry regions like the Middle East.

In his lab, Herzberg has created membrane prototypes that resist biofouling. He even looked into designs that behave like the skin of jellyfish, which are not susceptible to bacteria growth. “We want to mimic nature,” he said.

Most of Israel’s irrigation water, and even its brackish desert aquifers, go to crops. Dina Zilberg, a BGU researcher, found another commercial use for that water: ornamental fish.

“The Israeli food fish market is small,” she says, “but 30 to 40 percent of cold-water ornamental fish exported to Europe comes from Israel.”

After the fish are exported, water from their tanks and ponds is recycled, often to irrigate desert date palms.

In a lab near Zilberg’s, other BGU researchers raise edible sea bass, using as little water as possible, no more than 400 gallons a day. The fish thrive in the small tanks. Any bacteria they generate create gases that are then used to power the equipment that sustains the fish.

And of course the water is recycled.

These types of experiments take time to develop. Meanwhile, the scientists of BGU keep looking for new ways to turn the desert into a breadbasket, even when it seems impossible or defies conventional wisdom. Quoting David Ben-Gurion, Lazarovitch says, “If an expert tells you it can’t be done, get another expert.”

Hostile terrain helping to save the world

The ride to Wadi Mashash is annoyingly bumpy.

This is, after all, uncultivated, unpaved wasteland in the heart of Israel’s Negev Desert. Not much there but rock, sand and sky shimmering in the midday heat.

To BGU botanist Jhonathan Ephrath, this inhospitable terrain is a proving ground. Wadi Mashash is the site of an experimental olive and acacia orchard overseen by Ephrath and his graduate students. Unlike other orchards across Israel, this one does not rely on drip irrigation. It doesn’t rely on human irrigation at all.

Rather, it depends only on what falls from the sky.

The orchard was planted in what resembles an empty earthen swimming pool. A square-shaped 2-foot berm surrounds the 2-acre site, designed to trap every last drop of rainwater.

The olive and acacia trees were bred to thrive on minimal water. Ephrath also planted what he calls intercrops between the trees to increase biomass, making the orchard’s mini-ecosystem that much stronger.

“We have three to five rain events a year,” said Ephrath of the Sde Boker area, a total of “about 3 inches. This runoff irrigation [experiment] is not for Israel, but for the Third World.”

The olive trees provide both foodstuff and cash crop. The fast-growing acacia trees become a handy and renewable source of firewood for regions in developing countries that are suffering from deforestation and indiscriminate native tree cutting as a source of heating.

Ephrath’s specialty happens to be root systems. He has studied root parasites, natural herbicide replacements and the effects of salinity and other stressors on root physiology. In his Wadi Mashash orchard, he even installed little spy-cams a few inches under the soil to monitor the roots day by day.

Science aside, Ephrath made clear the orchard project is an example of Israeli innovation devoted to making the world outside Israel a better place.

“We do intensive agriculture for those without infrastructure,” he said. — dan pine 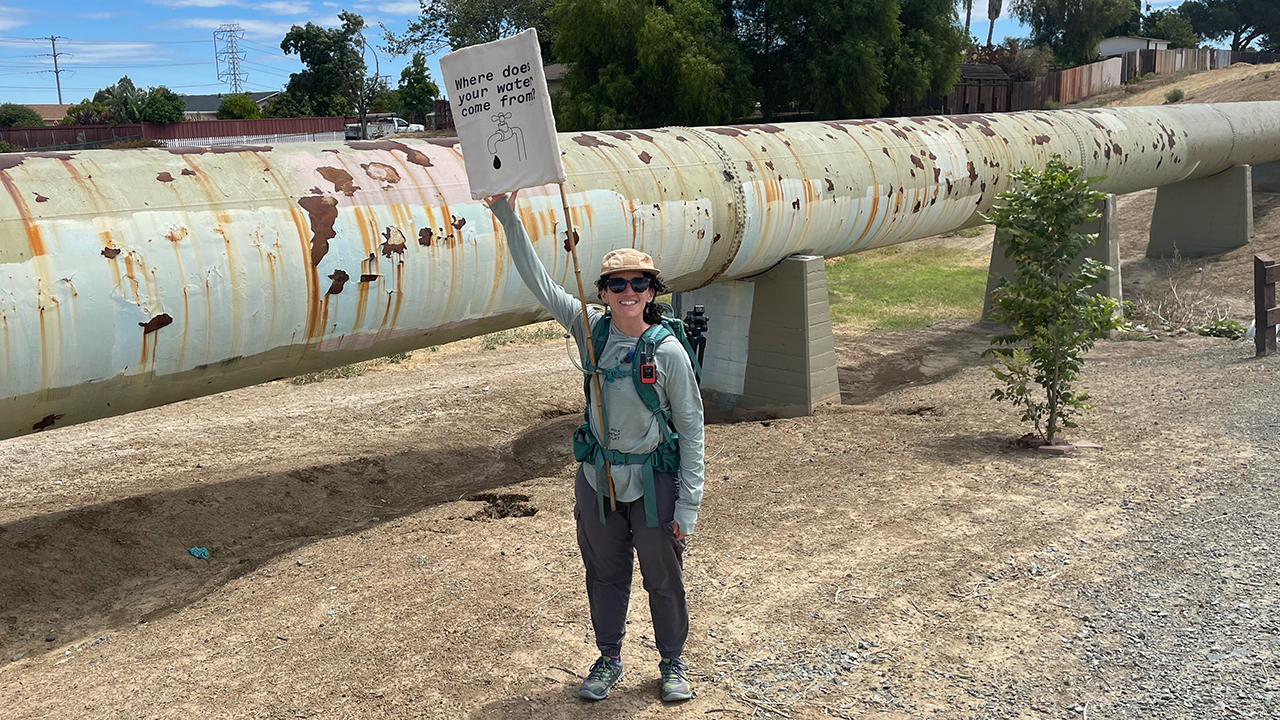