Oakland resident Elizabeth Rynecki is neither a writer nor an art historian by training. She has worked in her family’s real estate business for years.

But as a child and grandchild of Holocaust survivors, Rynecki has developed a connection to the lost world of European Jewish culture, a connection so deep she felt compelled to write a book, “Chasing Portraits,” about that lost world — specifically, the world inhabited by her great-grandfather, Moshe Rynecki, a prominent portrait painter in Warsaw in the early-to-mid-20th century.

Growing up in the Bay Area, Rynecki said, she knew that her father and his parents had experienced profound loss and dislocation as a result of World War II. Yet, as in many Jewish postwar homes haunted by the Shoah, “There was a lot of not talking about it,” she said.

Elizabeth Rynecki with one of her great-grandfather’s paintings

A turning point in her understanding of her family’s history and her great-grandfather’s place in art came in 1992 with the death of her grandfather, George Rynecki, Moshe’s son. Packing up his home and belongings in Mendocino County, she and her father, Alex, came upon George’s memoir about the war years. Hungrily tearing through the memoir’s pages, Rynecki stopped in her tracks when she spotted her name in a paragraph about the Holocaust.

“Some will say it will never happen again,” George Rynecki had written. “Well, it’s too easy. It did happen … There are hundreds of books on the subject. Nevertheless, I am a Jew and I write. I’ll do it until the end of my days. If only for my granddaughter, Elizabeth, to know the truth, and not to be afraid of it.”

Rynecki, a recent college graduate at the time, took up her grandfather’s challenge to know the truth about her own family — starting with Moshe, who during his lifetime completed some 800 paintings, most of which depict Jewish family and communal life in the communities of Eastern Europe prior to Hitler’s rise to power. His art was exhibited widely in Poland and other parts of Europe in the first decades of the 20th century. Copies of his images also appeared in Jewish newspapers of the time.

He was, said Rynecki, the Roman Vishniac of painters, referring to the famed 20th-century Jewish photographer who documented shtetl life in Eastern Europe before its eradication by the Nazis.

“He struggled to live a very secular life,” she said of her great-grandfather, but he honored his religious upbringing in his artwork. “It was a constant balancing act for him.”

As the Nazis entered Poland, Moshe Rynecki and his family hid paintings throughout Warsaw and environs. His wife, Perla — along with George, George’s wife and baby Alex — survived the war in hiding, but Moshe perished in the Majdanek extermination camp after deportation from the Warsaw Ghetto.

Immediately following the war, Perla was able to salvage about 120 of her late husband’s works, many of which subsequently hung in the homes of his son and grandson in Northern California. As a child, Rynecki said, she would look admiringly at her great-grandfather’s paintings but never gave them much thought. “You take your home life for granted,” she said.

But for the last two decades, Rynecki, 46, who wrote her master’s thesis on children of Holocaust survivors, has taken nothing for granted. As she crisscrossed the globe to seek answers about the whereabouts of her great-grandfather’s 600-plus paintings that remained unclaimed, she began documenting her journey in a blog and in an online gallery of his work at www.rynecki.org.

The genesis for the book, as J. reported in 2015 (http://tinyurl.com/chasing-portraits), occurred pretty much at the same time that Rynecki was developing a “Chasing Portraits” documentary that chronicles her budding understanding of her great-grandfather’s life and work. The film is now in post-production, and Rynecki hopes sales of the book, which includes a 16-page color insert featuring 27 photographs of Moshe Rynecki ‘s paintings, will underwrite the movie’s completion. The 400-page book is being released this month in hardcover by New American Library, an imprint of Penguin Random House.

Many working in the realm in which art intersects with Jewish culture eagerly await both the film and the book. One is New York University professor Barbara Kirshenblatt-Gimblett, an authority on modern Jewish culture with whom Rynecki frequently consulted over the years.

“What’s so special about Moshe Rynecki’s work is that it refracts a traditional world through a modern sensibility,” Kirshenblatt-Gimblett said. “He comes from a religious family, from an intact and very rich and deep Jewish world, a Hasidic milieu, which served as a great source of inspiration.

“When someone from that world travels such a great distance — to higher education, the intelligentsia, the art world — that person brings something totally unique to the artistic enterprise. Moshe Rynecki has left a unique legacy, a body of work that represents with deep emotion and vividness his unique personal experience of a world that is no more.”

At the Magnes Collection of Jewish Art and Life at U.C. Berkeley, which holds one of Moshe Rynecki’s paintings, “The Gift of Bread,” curator Francesco Spagnolo praised Elizabeth Rynecki for her years of extensive research, saying, “The recovery of legacy is a labor of love.” 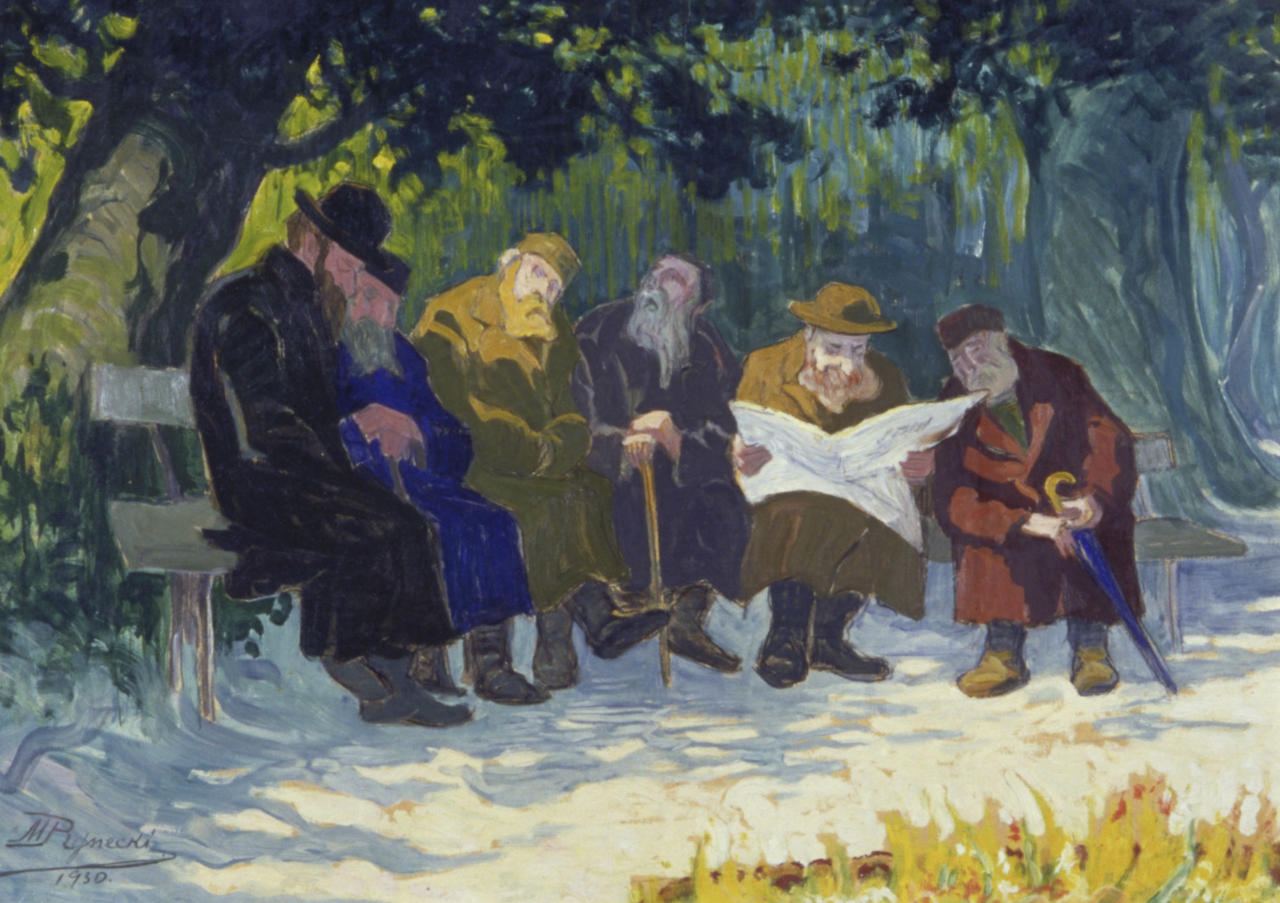