I want to raise Christian kids with Jewish holidays


My mother was raised Jewish and converted to Christianity when she married my Christian father. They raised us kids Christian, and my mom celebrated all the Jewish holidays in our home. I would like to marry a guy who also has fond memories of Jewish holidays so I went to a Jewish singles event. But as soon as I mentioned that I wanted to raise my future children as Christians they basically stopped talking to me. Why is no one interested in my kind of upbringing? — Confused and Single

Dear Confused: I am sorry that your mother didn’t explain more to you about how Jewish law and Jewish customs work. It is not at all common for Jews to desire to raise their children as Christians, even while retaining the holidays. As a minority people, Jews have historically worked hard at maintaining their family’s Jewish identity from one generation to the next. With that goal, Jewish singles events are typically seen as a place where single Jews can meet other Jews with the purpose of finding a partner. I suspect that the young men you met were at the event in order to find a woman who wanted to raise Jewish children.

There’s a bit of irony in your story because, as the child of a Jewish mother, you are Jewish according to Jewish law. There is no leaving Judaism; born a Jew, you stay a Jew. But since you are self-identified as a Christian and want to have your children identify as Christians — granted, who celebrate Jewish holidays — Jewish men who want Jewish children are unlikely to pursue a relationship with you.

For your own sake, you need to find a Christian man who shares your desire to have Christian children. You can certainly celebrate the holidays of your childhood as your mother did. Did your father enjoy the holidays with your siblings and mother? Your future husband could certainly do the same. Since Christianity grew out of Judaism, Christians typically don’t feel conflicted when engaging in Jewish activities. I’ve had Christians come to a number of my workshops to learn more about, as one woman said, “what Jesus did and why.”

However, I would strongly urge you to teach your children how they will be perceived by the Jewish community. Also, be clear that they are being raised as Christians and let them know some of the differences between the two religions so that they feel knowledgeable and prepared to encounter strong opinions about their identity. Be aware that your identity is confusing for many Jews and as such, it is at times interpreted as an affront. Your mother’s conversion to Christianity and the duality of your home celebrations may be perceived as a betrayal or loss by some Jews. The people you encounter may become abrupt or suspicious when you tell them your life story.

I want you to think about taking a basic Judaism class. Currently you are in the awkward position of knowing quite a lot about some aspects of Judaism, but feeling uncomfortable with what you don’t know. I think you’d enjoy having a broader understanding. Maybe one of your siblings would enjoy going with you. You’d have someone with whom to discuss the things you learn and to compare them to your own experiences. I could connect you with a sensitive teacher and have you meet with them before the class so that they can be responsive to your unique situation and needs. Let me know if you are interested. 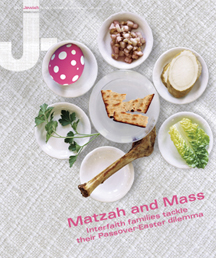