Jacob Tanz immigrated from Israel in 1967, and as a student at UCLA started attending Israeli folk dancing nights for the oldest reason in the book. “That was the place to meet Israeli and Jewish women,” he said.

He succeeded. Tanz met his wife, Wendy, at the famed Cafe Danssa, a now-defunct hub for Israeli and folk dancing in West Los Angeles. Decades into their marriage and three sons later, they’re still dancing.

“This is what we do two times a week,” said Tanz, now 64 and a resident of Los Altos, at a recent Thursday-night dance session at the Oshman Family JCC in Palo Alto.

When Tanz was a newcomer to the United States, Israeli folk dance was a way for him to stay connected to his homeland. Now he and his wife, who learned Israeli dancing as a student at L.A.’s Grant High School, come together with other Jews, Israelis and dance lovers in the Bay Area twice a week for lively folk dancing nights in Sunnyvale and Palo Alto. It’s a fitting pursuit for a couple whose last name means “dance” in German.

For those in the know, the Bay Area has a lively Israeli dance scene that’s been active for more than four decades. A core group of 100 or so committed dancers makes the Peninsula circuit every week, from the Sunnyvale Community Center on Monday nights to the OFJCC on Thursday nights; about 45 show up at Congregation Etz Chayim in Palo Alto for the monthly dance party Nirkoda. In the East Bay, some 30 dancers attend Café Simcha on Wednesday nights at the Arlington Community Church in Kensington.

And in San Francisco, the monthly Saturday-night gathering Café Shalom is the granddaddy of them all, started in 1969 at the original JCC on California Street and now held at a church in the Outer Sunset; it draws about 60 regulars, plus a couple dozen beginners at a Tuesday-night session. Synagogues and other JCCs also offer folk dance classes on a smaller scale.

At the more popular gatherings, dancing goes on late into the evening, drawing a diverse crowd of people who are drawn by the social environment — many a couple have met through Israeli folk dance — the music, a connection to Israel and a love for dance.

“We go up and behind, up and behind, then sway and rock, one, two, three, four,” called out Karina Niederman, demonstrating a new dance in the JCC gymnasium in Palo Alto.

Niederman, a native of Argentina, hosts an Israeli dancing night there every week; she regularly fills the place with around 100 dancers, who pay a $12 admission fee. The setting isn’t fancy; the overhead gym lights glare, and on the other side of a divider, a basketball game is going on. But the dancers greet each other warmly, join the circle and sing along as they move to the Israeli music playing from the speakers. The space comes alive.

“When I come here, I don’t talk on the phone, I don’t talk business. I sing and I dance,” said Miri Bialik, 65, who lives in Sunnyvale and is a regular on the Bay Area Israeli folk dance circuit.

Bialik was introduced to Israeli folk dance as a 10-year-old in her native Israel, but she didn’t like it. “I was very tall, and I had to be the man always, so I said it’s not for me,” she said. After she came to the U.S. and her children were grown, she took up dance again and became passionate about it. That was more than 20 years ago.

When Jewish immigrants came to pre-state Israel in the late 19th and early 20th centuries, they brought the folk dances from their native lands with them. In the 1930s and ’40s, Israeli choreographers built upon those to create new folk dances for a new country. Many are still part of the traditional repertoire, while modern choreographers continue to create dances set to contemporary music.

At the JCC, popular Israeli songs dominate, and the dancers write requests on a white board by the side of the room. As the evening progresses, Niederman moves from leading simpler, well-known dances to teaching and demonstrating more involved choreography for one of the three main styles of Israeli folk dance: circle dance, couples dance and line dance.

“[Folk dance] is easier for the guy because the guy doesn’t always have to be creative the way you do in ballroom,” Jacob Tanz said. “Here, everything is choreographed.”

Bialik, dressed elegantly for the evening in dark pants and a dark fitted top, said she often translates the songs for people who don’t speak Hebrew.

Many of them, however, do. More than half the dancers who attend the Palo Alto and Sunnyvale folk nights are Israeli, according to regulars. They also skew older, mostly in their 50s and 60s. Many have been dancing for years and still come at least two nights a week. There are also a handful of younger dancers who have found and fallen in love with Israeli dancing.

One of the youngest and most confident dancers on the floor at the Palo Alto JCC is Aaron Alpert, 28, which is no surprise: He was born into a veritable Israeli folk dancing dynasty. His parents met at the UCLA Hillel in the early 1970s; his father had already developed an interest in Israeli dance at Jewish camp in Malibu, and his mother took it up as a student looking for a social activity (both are American).

“There’s a video of my first Israeli dance,” Alpert said. “I was 2½ months old.”

Alpert’s father, Dale, taught and led weekly Israeli folk dancing at Cafe Danssa, and he grew up learning the dances and going to dance camps (retreats, usually held at Jewish summer camps, where devotees dance and learn for days on end with leading choreographers — he says he’s been to 60 of them). Now he runs the monthly Nirkoda dance party in Palo Alto and is starting his own dance camp, scheduled to launch next fall at Camp Newman in Santa Rosa.

Dance camp is “a way to really get away, let loose,” Alpert said. On the first night of a camp, dancing usually goes until 1 or 2 a.m. On the second night, dancers stay on the floor until 4 or 5. By the last night, Alpert said, they’re dancing all night.

“I always like that it’s a community of people who are here with a common purpose: love of Israel,” he said.

Community is a key draw for many of the regular dancers, who also point to the exercise benefits of dancing for several hours twice a week. Julie Friedman said when she moved to the Bay Area eight years ago, dancing provided her with an instant network of friends.

“Someone walked up to me and said, ‘You’re new, do you have somewhere to go for the holidays?’ ” she recalled.

Friedman is American and first learned Israeli folk dance as a Jewish camp counselor in Wisconsin. She became passionate about it when she lived in Israel in the 1990s.

“It was my social outlet, it was where I met people, it was my workout,” Friedman said. “Usually it was the type of thing that would start at 8 and go to midnight. The hardest part in Jerusalem in the winter was you would come home and it was freezing, and making the mad dash for a shower and jumping into bed. It makes me happy.”

While folk dance isn’t exactly trendy in Israel nowadays, it’s still widespread. On a single night in Jerusalem or Tel Aviv, Friedman said, there might be three or four dancing sessions to choose from. Friedman, who acknowledges she is “hardcore,” danced up to five times a week when she was living in Israel.

“I call it the great equalizer. It’s a little bit like the Israeli army in that matter,” Friedman said. “I have danced with the fellow who owned the local green grocer and the deputy mayor of Jerusalem. You could be dancing with a professor from Hebrew University on your left and the guy who delivers your mail on your right.”

Though most Bay Area folk dancers feel a connection to Israel, some regulars come for other reasons. Hung Cheung, 58, and his wife, Grace Chiu, 56, have been dancing twice a week for 10 years and regularly attend dance camps in Southern California with other Israeli folk dance aficionados. Before moving to the U.S., they lived in Hong Kong, where they were active in the international folk dance scene. They always loved the dance music from Russia and from Israel, and so when they arrived in the Bay Area, it was natural for them to join the existing Israeli dance community.

Though Cheung doesn’t speak Hebrew, he has memorized the songs and sings along. He and his wife have learned about Israel and Judaism along the way, and he noted during this interview that the Jewish New Year was coming up.

“Shanah Tovah,” he and his wife said in unison.

Strong social networks bind the dancers. A group of them have been getting together to take long hikes on Sundays for the past two years, and other groups have traveled together: to Machu Picchu, to Costa Rica and to Switzerland, said Vicky Ryuka, 64, who has been dancing in the South Bay for 15 years. She’s from Argentina, and she said dancing helps her balance mind and body.

“I love the music. I like it because it’s social,” Ryuka said.

For many of the dance lovers who spend their evenings and weekends rotating between dance nights, Israeli folk dance is addictive.

“Thursday evening is the highlight of many people’s lives,” said Tatyana Fomin, 40, a native of Russia who lives in Mountain View. “It’s like a narcotic; you can’t miss it.” 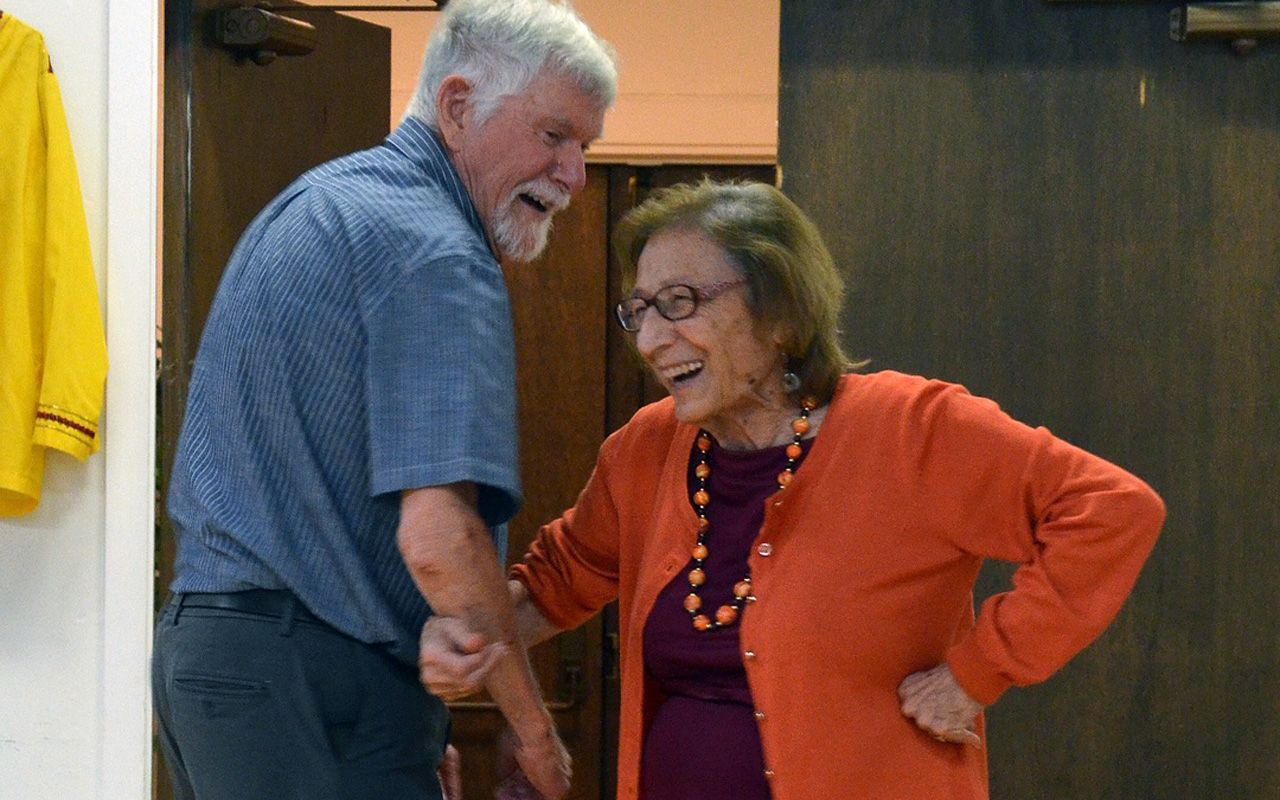