There are very few good feature films about Hanukkah. But despair not, oh descendants of the Maccabees! Anyone with internet access can be entertained for the holiday’s eight nights.

I have mined YouTube and other sources to bring you the best I could find to light up your Hanukkah. Here are my picks:

“The Hebrew Hammer” (2003): Modeled after “Superfly”-type films of the ’70s, it features Adam Goldberg in the title role as a Jewish crime fighter who must stop the evil son of Santa Claus from destroying Hanukkah. It’s pretty good and often quite funny. Look for Jewish actors Rachel Dratch (“SNL”) and Peter Coyote of Mill Valley in big supporting roles. You can stream it for free (with ads) on OVGuide, Popcorn Flix, Snagfilms, FilmRise and others (most of these apps/sites are on Roku, too). About 90 minutes.

“An American Tail” (1986): This animated musical stars “Fievel Mousekewitz,” a Russian-Jewish mouse who, along with his family and other mice (read: “Jews”) are always being persecuted by cats (read: “bad non-Jews”). As the movie opens, Fievel is given a hat (a family heirloom) by his father as a Hanukkah present. His father also tells him about America where, he says, there are no cats. A pogrom forces Fievel to flee to America, where he has many harrowing adventures involving cats — but things work out in the end. Steven Spielberg produced this film, whose theme song (“Somewhere Out There”) was a big hit. About 90 minutes. $3 to stream on YouTube; also on DVD.

“The Rugrats” 1996 episode entitled “Chanukah” is terrific. It really tells the story of the holiday in a half-hour via a school play and other clever devices. It’s so funny and informative that some critics labeled it perhaps the best Hanukkah special. Not for scholars, but worthwhile family fun. Runs 30 minutes. It’s available on demand on Hulu. Also on Amazon for purchase ($2) under the title “Rugrats Character Collection: Holidays.”

“Maccabees: Revolution and Redemption” (1997): In the ’90s, the A&E cable station was known for literate, PBS-type content. This episode (part of the “Mysteries of the Bible” series), features insight by Jewish religious scholars and provides a concise, intelligent view of the history of the Jewish revolt. Runs 45 minutes. Available free on YouTube.

“When Hanukkah Harry Saved Christmas” is a very funny “SNL” skit (1989) starring Jon Lovitz in the title role. Harry fills in for a sick Santa and delivers toys to good little non-Jewish kids. Pulling his sled are donkeys named Herschel, Schlomo and Moishe. Runs about 8 minutes.

A number of people who went on to work on the “The Simpsons” are behind the very professional “Bubbe’s Chanukah,” (1989) which features Muppet-like puppets who sing. Good for the whole family. Runs 42 minutes.

Most of “The Charlie Brown Christmas Special” was converted via dubbing in Jewish-themed dialogue and adding one scene. Called “Charlie Brown’s Hanukkah,” it is much cleverer and a bit more risqué than I expected. I won’t ruin the surprises, but some real thought went into the jokes and changes in song lyrics. About 6 minutes.

I can’t recommend Adam Sandler’s Hanukkah movie, “8 Crazy Nights,” but I can recommend listening to his four holiday songs. About 15 minutes.

Listen to “Light One Candle,” a Hanukkah song written by Peter Yarrow (the Jewish member of Peter, Paul, and Mary). It’s that rare thing: a catchy, modern Hanukkah song. About 4 minutes. 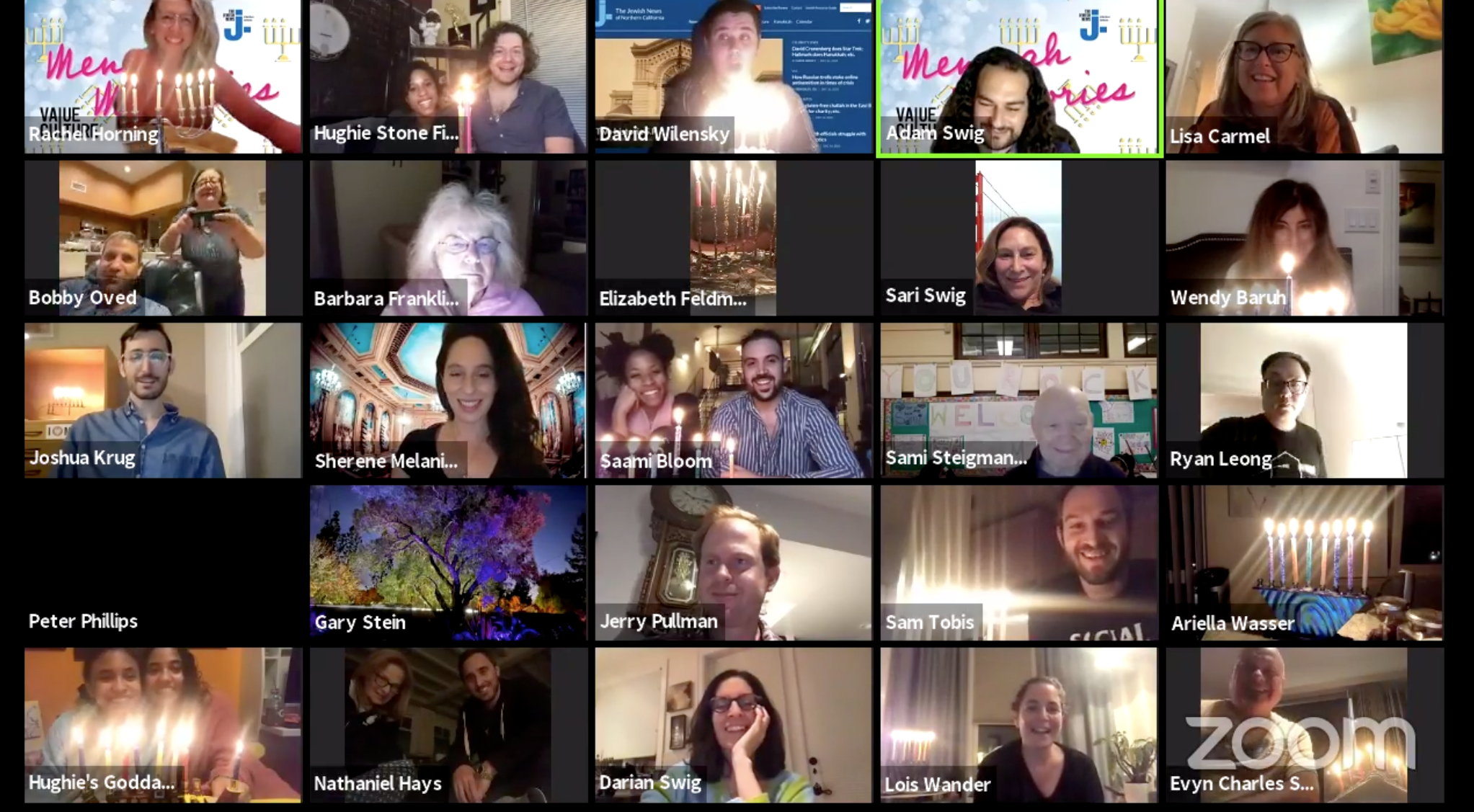