Paris and gay love through the eyes of Gertrude Stein and Alice B. Toklas

One of the best gay love stories of the 20th century took place in Paris, and soon will be on stage in San Francisco.

Theatre Rhinoceros presents “Gertrude Stein and a Companion,” a show chronicling the witty, romantic relationship of Gertrude Stein and Alice B. Toklas, two key figures in the Parisian modern arts and literature movements of the first half of the 20th century.

The show opens for a two-week run on Wednesday, Dec. 28 at the Eureka Theatre. This iteration of the 1986 play, written by Win Wells, has won first prize at the Edinburgh Festival and the Theatre Festival in Sydney, and was awarded the Vita Award for Best Play in South Africa.

Kathryn Wood, who plays Stein’s character and co-directs the production alongside John Fisher, says the play sets the record straight on two common misconceptions about the duo — that Toklas was a doormat (she wasn’t) and that “two homely middle-aged women can’t possibly have a good sex life” (they can).

“I fell into interwar Paris when I was in my mid-20s. I’ve never been able to read my way out of it,” Wood said. “John Fisher approached me with the script because he knew that Gertrude and Alice have been an interest of mine for over 20 years.”

The play begins with the death of Stein in 1946 and the birth of her ghost, who pays a long visit to a mourning Toklas. The resulting dialogue contains a rich portrayal of 20th-century Paris, through the reminiscences and commentaries of the two female companions. The play also flits back and forth in time, bringing in the voices — both humorous and intelligent — of many of the duo’s artistic companions of the era, including Ernest Hemingway and Pablo Picasso.

Using text from Stein’s writing, letters and interviews, the interworkings of the women’s relationship is revealed. “They were regular in being gay … they were gay the same length of time every day,” declares the lilac-colored flyer for the play.

Elaine Jennings stars alongside Wood, as Toklas, who was born into a middle-class Jewish family in San Francisco in 1877 and died in Paris in 1967. Stein, also Jewish, grew up in Oakland — which she was believed to be referring to when she famously wrote “there is no there there.”

While Stein’s reputation tends to be one of inaccessibility, and as a poet she is known for her fragmented sonnets and repetitive prose, Wood said the play is accessible to all kinds of audiences, no matter the literary background. 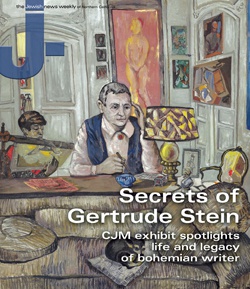