Though she’d been in Marin for nearly six years, Francine Joselowsky was having a hard time finding a Jewish community for her young family to feel connected to. And then in 2014, a new rabbi with a background in earth-based spirituality moved to town.

“I was feeling disconnected and tried to do all the traditional Jewish things, but nothing fit,” said Joselowsky, who grew up in a Conservative family in South Africa. “Then I heard of a cool new rabbi who was starting an outdoor Jewish education community and trying to reach people in Marin who didn’t necessarily find meaning in synagogue.”

That “cool new rabbi” was Elana Rosen-Brown, a recent alumna of Hebrew Union College–Jewish Institute of Religion in both rabbinical and cantorial studies who had just taken a job at Congregation Rodef Sholom. With an extensive background in wilderness and outdoor training, Rosen-Brown came to create a program that merged Jewish spirituality with the outdoors. Thus she begat Makor Marin, a synagogue without walls or, as she calls it, an outdoor sanctuary.

Every month, Rosen-Brown organizes a gathering for young families in Marin, celebrating Jewish rituals that resonate with the natural surroundings. The morning starts with singing and a short lesson in earth-based Judaism, followed by a medley of activities that include art, animal tracking, nature walks and hiking.

“I’ve heard so many people talk about how their most spiritual experiences have been in the outdoors. Too often people think of nature as disconnected from their Judaism — that the rituals of Judaism can only happen inside the synagogue,” said Rosen-Brown. “Helping to break down that fallacy is important. Bringing meaningful Jewish experience outside the walls of the synagogue is where a lot of people are at right now, and it helps us connect powerfully with our Judaism.”

Now in its second year, Makor Marin has organized events around the county, such as “Shavuot Under the Stars” at Slide Ranch and “Apples and Honey” at Miwok Park in Novato.

This past weekend, Makor Marin hosted about 30 families for a Tu B’Shevat seder under the trees at Stafford Lake Park in Novato. Coming up are “Havdalah and S’Mores” at China Camp on March 4 and Passover at Green Gulch Farms on April 1.

Rosen-Brown got connected to the world of Jewish Outdoor, Farming, Food and Environmental Education (JOFFEE) in 2005 while working as the Adamah Fellow at Isabella Freedman in Falls Village, CT. After that experience, she understood the deep connection between nature and Judaism and became involved in Jewish environmental and educational organizations such as Hazon and Teva. She also studied mindfulness, particularly its place in Jewish wilderness spirituality.

“Jewish learning, ritual and meaning-making can take place anywhere and everywhere,” said Rosen-Brown. “My earliest experiences of earth-based Judaism were as a child, going to do tashlich at the river. Connecting with spirit in nature has always been a natural expression of my Judaism.”

After starting the program at San Rafael’s Rodef Sholom in 2014, Rosen-Brown wrote a proposal for the “sanctuary in the woods” and was awarded a grant through the S.F.-based Jewish Community Federation and Endowment Fund’s Impact Grants Initiative. Though it is funded through the Federation, Makor Marin is still considered a project of Rodef Sholom.

“I believe that synagogues today have a responsibility to be engaged with building Jewish community beyond their four walls and taking programs outdoors, and JOFFEE and wilderness spirituality programming is an incredible way to do just this,” said Rosen-Brown. “But I never say I’m a rabbi because it’s not about me being a rabbi — it’s about breaking down barriers for people. People just call me Elana.”

Each month’s sanctuary is set in a different outdoor location in Marin, often in partnership with other local environmental nonprofits — such as Slide Ranch, the educational farm at Muir Beach, and Trackers Bay, which teaches nature tracking skills and plant ecology. The events attract an intergenerational crowd. Young families with small children, often with grandparents tagging along, make the trek to experience the natural beauty of Marin within a Jewish context.

“It’s made me feel more comfortable talking with my kids about being Jewish — being able to see that everything is connected,” said Joselowsky. “My son realizes that you don’t have to go in somewhere to pray, that you can go anywhere. His idea of spirituality is much larger and broader because of how Elana talks about nature.” 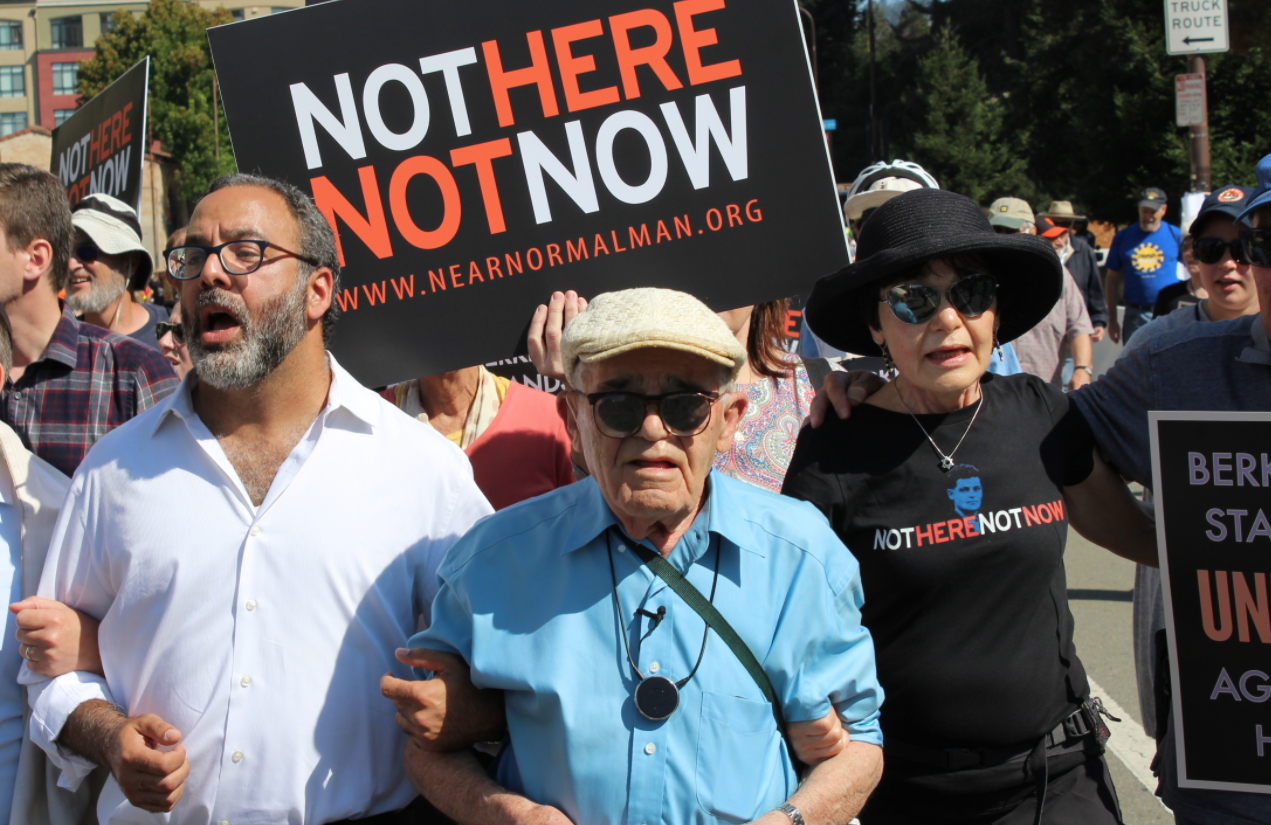