Even before the communist candidate Jean-Luc Melenchon emerged as a serious contender for the presidency in France, the elections were shaping up to be a fateful moment for the country’s 500,000 Jews.

Many of them are deeply worried about the rise in the polls of Marine Le Pen of the far-right National Front party, with its xenophobic policies and anti-Semitic roots. Some French Jews vowed to leave France should Le Pen win — she was leading the polls for weeks ahead of the first round of the elections on April 23 and the final one on May 7.

With the meteoric rise of Melenchon, an anti-Israel lawmaker with a record of statements deemed anti-Semitic, French Jews now feel caught in a vice between two extremes. Melenchon climbed to third place in the polls, with approximately 20 percent of the vote this month, from fifth with 9 percent in February.

“I don’t see any significant difference between Melenchon and the National Front on many issues,” Joann Sfar, a well-known French-Jewish novelist and filmmaker who used to support communist causes, wrote last week on Facebook. Both are “surrounded by Germanophobes, nationalists and France firsters.”

Sfar’s post triggered a torrent of anti-Semitic statements about him on social networks.

Le Pen, whose father, Jean-Marie — a Holocaust denier and inciter of racial hate against Jews who founded the party his daughter now leads — recently said France “was not responsible” for the murder of Jews whom French police helped round up for the Nazis. She has also vowed to ban kippahs and the right of French citizens to have an Israeli passport – prohibitions she said were necessary to enforce similar limitations on Muslims.

“They both traffic in hatred, and they are both a danger to democracy,” CRIF President Francis Kalifat said last month, adding that his group shuns all contact with both politicians.

Melenchon, 65, a former Socialist deputy minister, was born to Spanish parents in what today is Morocco. He supports a blanket boycott of Israel. True to his populist oratory style, has said that allowing Israel to keep even some West Bank settlements “is like letting bank robbers keep the money.”

His fiery rhetoric in speeches and quick comebacks in recent television debates have helped the surge in Melenchon’s numbers following the establishment of his Unsubmissive France movement in February. So has his opposition to the increasingly unpopular European Union and to budget cuts designed to jump-start France’s stagnant economy. He is appealing to the poor with promises to increase welfare, promising the money will come from new markets that he seeks to open by improving relations with President Vladimir Putin of Russia and oil-rich socialist countries in South America.

These policies and his remarks have alienated many Jews, as did Melenchon’s assertion in 2013 that a Jewish Socialist politician, Pierre Moscovici, “thinks in international finances, not in French” – a statement critics said was anti-Semitic. (Melenchon denied the charge.) But it was only after a speech that Melenchon delivered in August 2014 that leaders of French Jewry flagged him as a public enemy.

Speaking in Grenoble less than a month after nine synagogues were attacked amid a wave of violent and unauthorized protests against Israel over its war with Hamas in Gaza that summer, Melenchon praised the protesters. He also condemned French Jews for expressing solidarity with Israel in a support rally in front of its embassy.

“I want to congratulate the youth of my country who mobilized in defense of the miserable victims of war crimes in Gaza,” Melenchon said in the speech at a general assembly of his Left Party. “They did so with model discipline when they were pushed to extremes on all sides. They knew how to remain dignified and embodied better than anyone the founding values of the French republic.”

Melenchon did not mention the synagogue attacks and the wave of anti-Semitic assaults that followed the protests. But he did go on to criticize thousands of French Jews over their support for Israel.

“If we have anything to condemn, then it is the actions of citizens who decided to rally in front of the embassy of a foreign country or serve its flag, weapon in hand,” he said.

I don’t see any significant difference between Melenchon and the National Front on many issues.

Melenchon also said: “We do not believe that any people is superior to another” — a statement some of his critics took as an allusion to the Torah’s designation of Jews as the “chosen people.”

He also accused CRIF of attempting to label him an anti-Semite in order to discredit his criticism of Israel.

“We’ve had enough of CRIF,” Melenchon said, shouting. “France is the opposite of aggressive communities that lecture to the rest of country.”

Recalling these and other remarks, François Heilbronn, a well-known scholar of political science, recently wrote in an op-ed that he will vote neither for Le Pen, whom he called a successor of those who collaborated with the Nazis, “nor for those who encouraged the pogromists and anti-Semites” in 2014, referring to Melenchon. “Vote to keep out of power those two candidates of hatred for democrats, modernity and liberty.”

Levy has endorsed Emmanuel Macron, a centrist candidate and former banker at the prestigious Rothschild investment house. Macron is leading in the polls ahead of the first round with approximately 23 percent of the vote, slightly ahead of Le Pen. The Republican candidate Francois Fillon, whose campaign has suffered because of his recent indictment on corruption charges, and Melenchon are each drawing 18-20 percent in the polls.

Whoever wins the first round Sunday will run against the second-place candidate in the final round.

Surprisingly, it’s not just the Jews who are finding equivalence between Melenchon and Le Pen. The comedian Dieudonne M’bala M’bala, who has multiple convictions for Holocaust denial and incitement against Jews, thinks the far-right and far-left politicians are both standing up against Jewish and outside influence.

“Some say it’s a faceoff between the real right and the real left,” Dieudonne said about Le Pen and Melenchon in a video he posted Tuesday and which has been viewed more than 160,000 times. “I say it’s the real France that will fight the France of Rothschild and of Qatar that finances terrorism and war in the world.”

Le Pen and Melenchon, he said, “are the candidates of peace.” 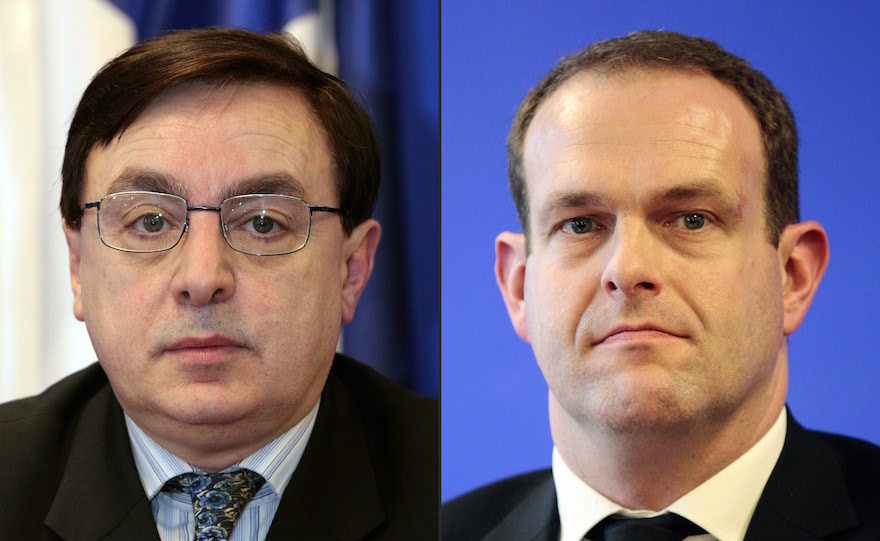 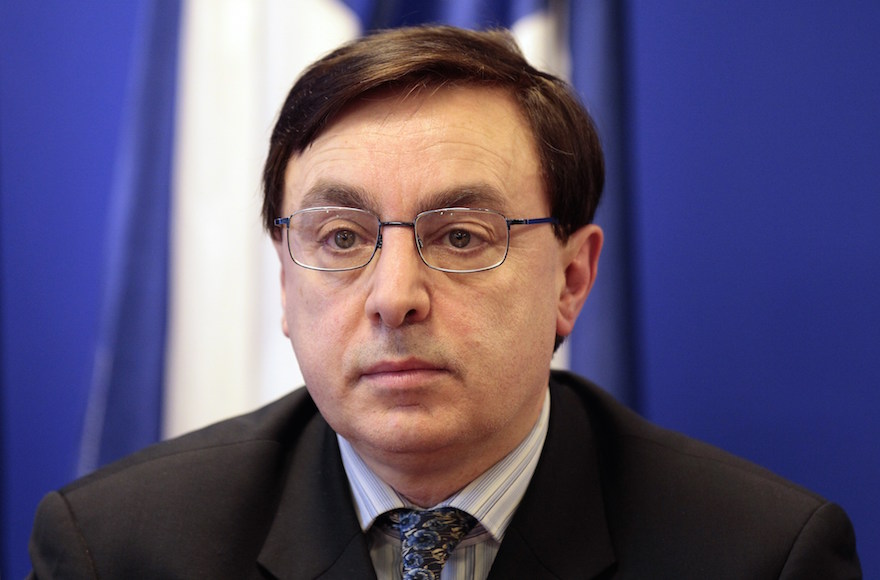