What we wrote about the 5th Jewish film fest in 1985

The Jewish Film Festival, opening its fifth season Thursday in San Francisco, will feature eight premieres among its 16 films from six countries.

The movies will range from intimate documentaries to “Beyond the Walls,” Israel’s intense entry in the 1984 Academy Awards.

The 16 films — also from the Netherlands, Sweden, West Germany, England, and Canada — were culled from 80 reviewed over the last year by the Berkeley-based festival’s director, Deborah Kaufman, and its associate director, Janis Plotkin.

The films were selected for a broad audience of Jews, many of whom are not affiliated with the Jewish community in any way except attendance at the yearly festival.

More than 7,000 people attended last year’s festival. Questionnaires were handed out, and many indicated “that the festival was their first contact with Jewish community.”

“There’s no other Jewish community-wide program like the Jewish Film Festival,” Kaufman asserted of the Bay Area screenings, which run in both San Francisco and Berkeley. “People begin calling in the spring to find out about the next one.”

The Jewish Community Federation gave the festival a $15,000 grant this year — the first grant from an organization representing the established Jewish community — “which gives us a sense of recognition … a sense we may be around another five years.” 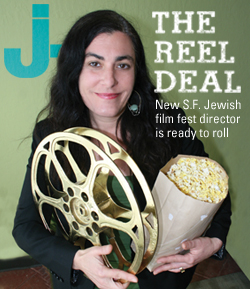