Of all the ceremonial and pastoral roles in Judaism, one of the least known in contemporary times may be the maggid, the keeper of the stories of the extended tribe.

That may change — in the Bay Area, at least — with the Thursday, Sept. 28 opening of “Jewish Folktales Retold: Artist as Maggid,” in which visual artists respond to the Jewish legacy of storytelling. The exhibit will run through Jan. 28, 2018 at the Contemporary Jewish Museum in San Francisco.

The maggid is often described as someone who is “like a rabbi but not a rabbi.” They are religious teachers of the lay variety who may act as repositories, transmitters and interpreters of Jewish cultural knowledge, often through stories, written or told.

“The Jewish people are not only the People of the Book — the book being the Hebrew Bible — but they are also the People of the Stories,” American folklorist Howard Schwartz writes in his essay in the exhibition catalog. “Wherever they wandered, they took their stories with them.”

Renny Pritikin, chief curator at the CJM, and Pierre-François Galpin, a former CJM assistant curator, asked 16 contemporary artists of diverse backgrounds to choose and interpret — in the media of their choice — one of the 100 traditional Jewish folktales in Schwartz’s 2009 anthology “Leaves from the Garden of Eden: One Hundred Classic Jewish Tales.”

“Folktales are time capsules of values in the distant past in distant places,” Pritikin writes in his introduction to the exhibit. “They are chock full of implicit values about wealth and poverty, men and women, obedience and renegade behavior, fate and free will, individual and community, piety and innovation, oppression and resistance, natural and supernatural, and much more.”

Though 11 of the 16 participating artists aren’t Jewish, all of them were able to find relatable elements in the source material, according to Pritikin. “Artists use many strategies when choosing to engage with classical sources, changing the form or content or both,” he notes.

For Russian-born, Brooklyn-based Vera Iliatova, reading “Milk and Honey,” the story of a young Polish shepherd separated from his family after following a goat into a magic cave, caused her to revisit her last years in the Soviet Union. At the age of 15, she was living in poverty while waiting to rejoin her mother in the United States.

Her oil painting, “Drift,” portrays a teenage girl sitting disconsolately on the ground while two women appear to be consoling her. The foreground, however, is filled with bright and hopeful flowers.

“This story reiterates Iliatova’s adolescent trauma,” Pritikin writes. “Folk tales enhance our understanding of our own histories by exposing patterns among the chaos.”

Chris Sollars, an S.F.-based artist known for using everyday city streets as the sets for his performative pieces, based his artwork for the show on the same story. He created a video in which he follows a goat through San Francisco streets to see where it will lead him.

Other commissioned works include sculptures, installations and photography. One photographic project, by Young Suh and Katie Peterson of Davis, was inspired by the story “The Souls of Trees,” in which Rabbi Nachman of Breslov, arguably the greatest Jewish storyteller of all time, advises a couple who can’t have children to plant twice as many trees as they cut down because trees are the souls of people.

For their project, photographer Suh and poet Peterson took portraits of families in forested landscapes and provided a contemporary, environmentalist reading of the tale, where trees equate to human lives.

Each work is accompanied by a listening station where visitors can hear Bay Area storytellers reading the folktales that served as inspiration. The Jewish artists featured are Iliatova, Dina Goldstein, Mark Rothfeld, Inez Storer and Julia Goodman.

The exhibition reflects the CJM’s approach of “engaging both Jewish and non-Jewish artists to dive deeply into a Jewish theme,” CJM executive director Lori Starr notes. “The commissioned works both pay homage to these magical and mystical pieces of Jewish cultural heritage and, at the same time, examine and question the values implicit in them.”

That stories have been important in Jewish culture is demonstrated by the vast collection in the Israel Folktale Archives in Haifa, established in 1955 by the late folklore scholar Dov Noy of Hebrew University. The IFA now contains more than 25,000 stories from every ethnic community in Israel, representing every Jewish community in the world.

Four of the folktales collected by the IFA are included in the CJM exhibit: “Elijah’s Violin” (Egypt), “The Bird of Happiness” (Iraq), “The Golden Mountain” (Morocco) and “Milk and Honey” (Eastern Europe). Those and the others selected are all among the 100 folk stories in Schwartz’s anthology, tales he calls “an excellent representation of the diverse kinds of stories found in Jewish folklore that are told in virtually every land where Jews live.”

Schwartz met Noy in 1977 while on sabbatical in Israel, which seeded in him a passion for these Jewish folktales. Nearly 20 years later, Schwartz published “Leaves.” Its stories, handed down both orally and in writing, span 1,500 years and come from across the Jewish diaspora, from Poland to Yemen.

“Jewish Folktales Retold: Artist as Maggid” speaks to the universality of these enduring stories. The artists, Pritikin writes, have aimed to create “something inspired by the original that ends up being wholly different. If that new end product comes full circle and addresses the same issues as the original, but from a completely different intellectual understanding, something special has happened.” 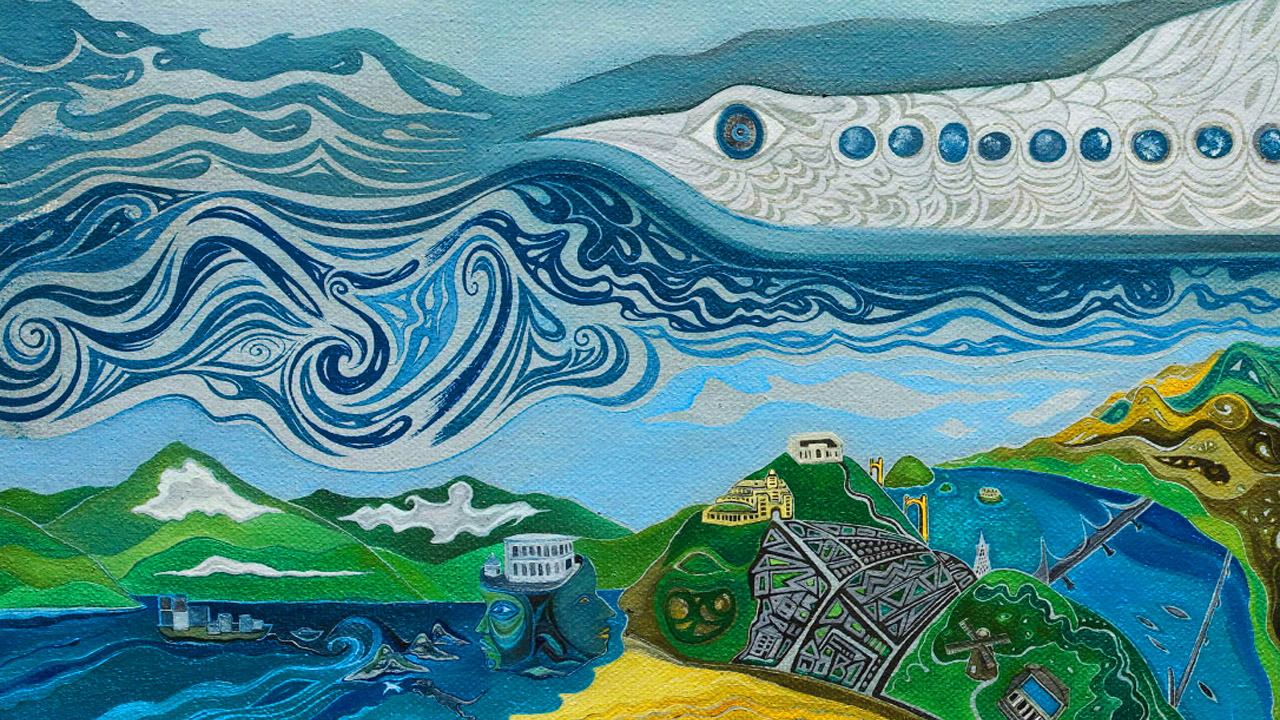