An easy start to Sukkot: ‘Open Doors’ at USF and sunny skies in the Mission

Sukkot is our most laid-back holiday. It is a long, relaxing sigh of relief after the panicked hyperventilation of Yom Kippur. With its layered themes of the fall harvest, gracious hospitality and the fragility of shelter, it is full of meaning — but a breeze after the heavy themes of the Days of Awe.

After holidays that coop us up in synagogue all day, Sukkot invites us out into the world, to dwell and eat outdoors in the cool autumn air (or whatever weather it is here in S.F.). The lines around our own little siloed communities become porous, like the sukkah itself. It is a festival of hospitality, a time to invite friends, family and others over for light snacks and friendly shmoozing. I’m excited this year to get out into the city and visit the sukkahs of different communities and friends.

Sukkot on the Green — University of San Francisco

My own community, The Kitchen, is a co-sponsor of Sukkot on the Green, which is organized by the Swig Program in Jewish Studies and Social Justice at USF and its director Aaron Hahn Tapper. Each night of Sukkot, through Oct. 11, the sukkah plays host to a different speaker around the very Sukkot-like theme of “Open Doors.”

The relatively large sukkah belongs to The Kitchen; every year we pitch it somewhere different around the city. USF is a Catholic university — so naturally the sukkah sits on a large green in the shadow of the gorgeous St. Ignatius Church. What better way to celebrate Sukkot than to have a Jewish space welcomed into a Catholic one, and then to welcome the Catholics and others into the Jewish one?

The first-night speaker was Ilana Kaufman of the Jewish Community Relations Council. She spoke about being a person of color in the Jewish community and how the Jewish establishment can be more inclusive of the entire spectrum of American Jews — which includes many people of color.

The sukkah was packed, every folding chair occupied. There were dozens of USF students, including many people of color and non-Jews. Also present were some pillars of Bay Area Jewry, including my rabbi, Noa Kushner, JCRC executive director Abby Porth, and San Francisco State University Jewish studies professor Marc Dollinger.

Kaufman told one story of volunteering to bring groceries to an older Jewish gentleman. When she showed up at the door with a white Jewish friend, the man assumed only the white friend was Jewish. “He straight-up ignored me,” Kaufman told us. This served a larger point about how both obliviousness and callousness make Jews of color feel invisible in Jewish spaces.

One student, a black man, asked how she deals with anti-Semitism in black spaces and racism in Jewish spaces. Growing up in S.F.’s Western Addition neighborhood, which was mostly black at the time, Kaufman said she never felt anti-Semitism from her black neighbors. Racism in the Jewish community, however, is commonplace, she said, something she still struggles with today. Kaufman never heard Jewish slurs from black people growing up. But she heard plenty of Jews say “shvartze” — “Yiddish for nigger,” she said.

And when Jewish communities refuse or decline to support Black Lives Matter, in spite of the many black Jews in America, “that’s racism,” Kaufman told us.

She gave the white Jews in the audience plenty of suggestions for how to be allies with Jews of color. For instance: “Notice who’s missing — and find a way to bring them in.” A good message for the start of Sukkot.

When the talk was over and the sukkah mostly empty, I stood with my rabbi and we shook the lulav.

For some no-nonsense davening with a strong Hallel, I know I can rely on Mission Minyan — a traditional, not-quite-egalitarian minyan with three seating sections and a mix of female and male service leaders. It’s not quite my community, but it’s easy to get to from my house and I’ve come to know many of the regulars as friends. I arrived a little late, but just in time for the beginning of Hallel — baruch Hashem! And to my pleasant surprise, I knew the voice of the man leading: It was Rabbi Jonathan Bubis of The Kitchen, whom I know well from our Kitchen davening team rehearsals, which he leads. He’s also a regular at Mission Minyan.

Bubis has a powerful davening voice, and led us in the standard Sukkot Hallel melodies. These tunes are rhythmically structured to provide moments to shake the lulav in the different directions according to the proper order (east, south, west, north, up, down — the mnemonic is ESau Was NUDe).

From my vantage point standing in the back, it was terrific fun to watch the folks who brought lulavs (about a third of the room, I’d guess) shaking them in unison to the music, up, down and all around.

I was honored with an aliyah during the Torah reading. To my glee, the reader was the incomparable David Henkin, one of the founders of Mission Minyan. Here is a Torah reader so competent and confident that he doesn’t even bother keeping his place with the yad; he just holds it limp in one hand. Henkin requires little to no preparation and delivers a full-throated, expressive reading. I grinned while I stood next to him taking it in.

To further symbolize the mixing of spaces and communities that Sukkot invites, there was a small delegation of folks from Congregation Sherith Israel, a large Reform synagogue whose prayer aesthetic is, for the most part, quite different from Mission Minyan. Among them were (one of) S.F.’s Reform clergy power couple(s), Rabbi Carla Fenves of Congregation Emanu-El and Cantor David Frommer of Sherith.

After services, we were all invited over to the home of a Mission Minyan regular with a lovely little backyard at his place in the Mission District. He is an engineer, so naturally he built two sukkahs, both out of efficient, light materials. A sukkah should have four walls, but his backyard provides an awkward space for a square. And so there were no right angles involved in this sukkah, but indeed there were four walls and enough room for 10 or so people. Upstairs he had another, a sort of tiny, one-person breakfast nook of a sukkah (nookkah?) built just outside his kitchen on the landing of an outdoor staircase.

It was a beautiful, warm, sunny day in the Mission. We sat outside, enjoying bagels from Izzy’s, Lagavulin whisky, slices of some uncommonly delicious peaches and other tasty vittles. All in all, a calm and relaxing start to an underappreciated holiday.

For the third night of Sukkot, I will be back at USF. The Kitchen is having Shabbat services and dinner. I’d love to see you there! (I’ll be the guy in the middle with a drum.) For some more ideas on Sukkot this year, check out this list. You can also look into pretty much any synagogue near you; most, if not all, will have a sukkah. 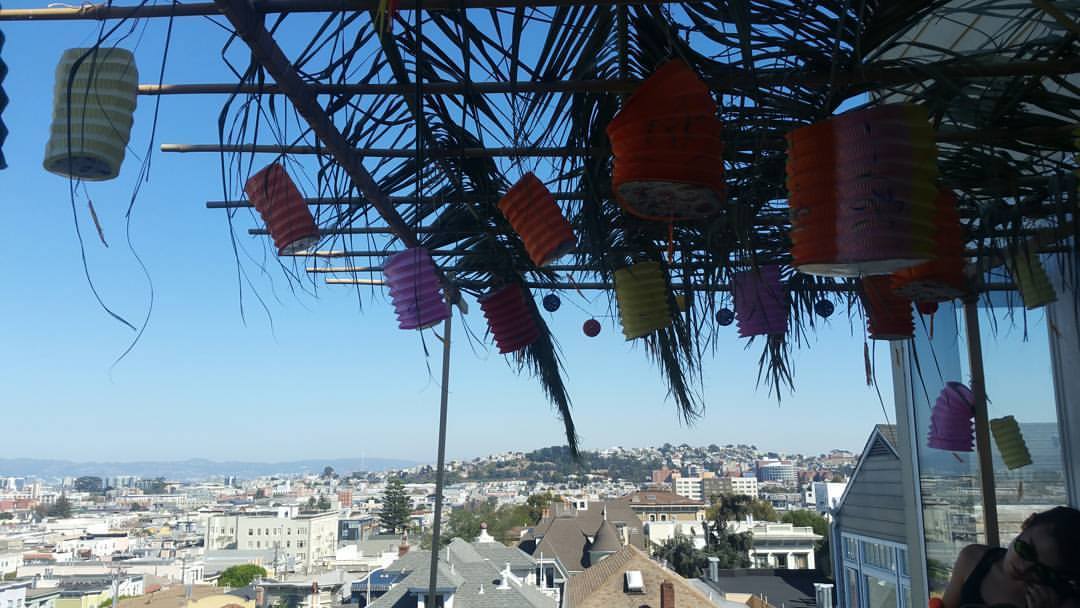 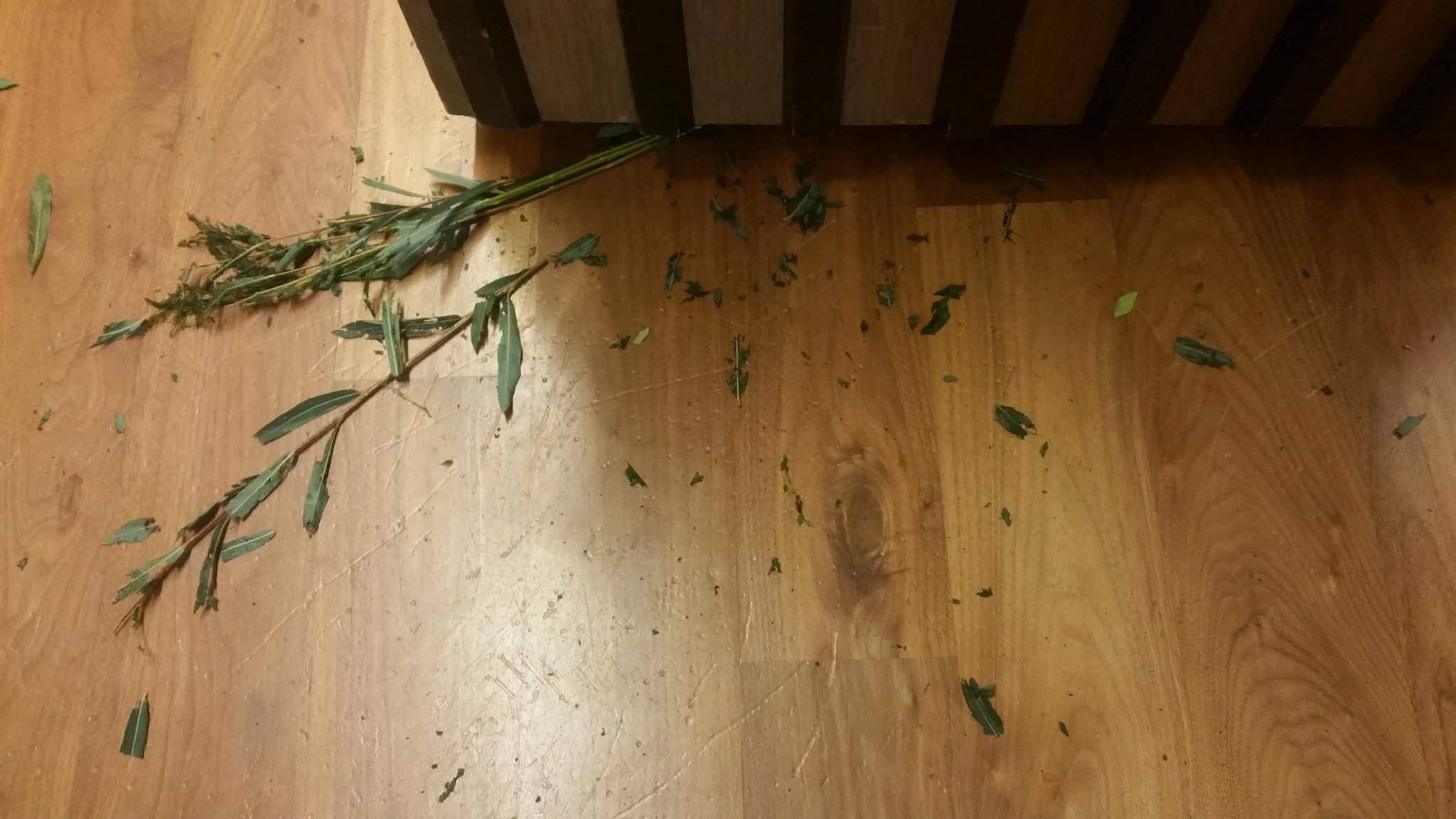 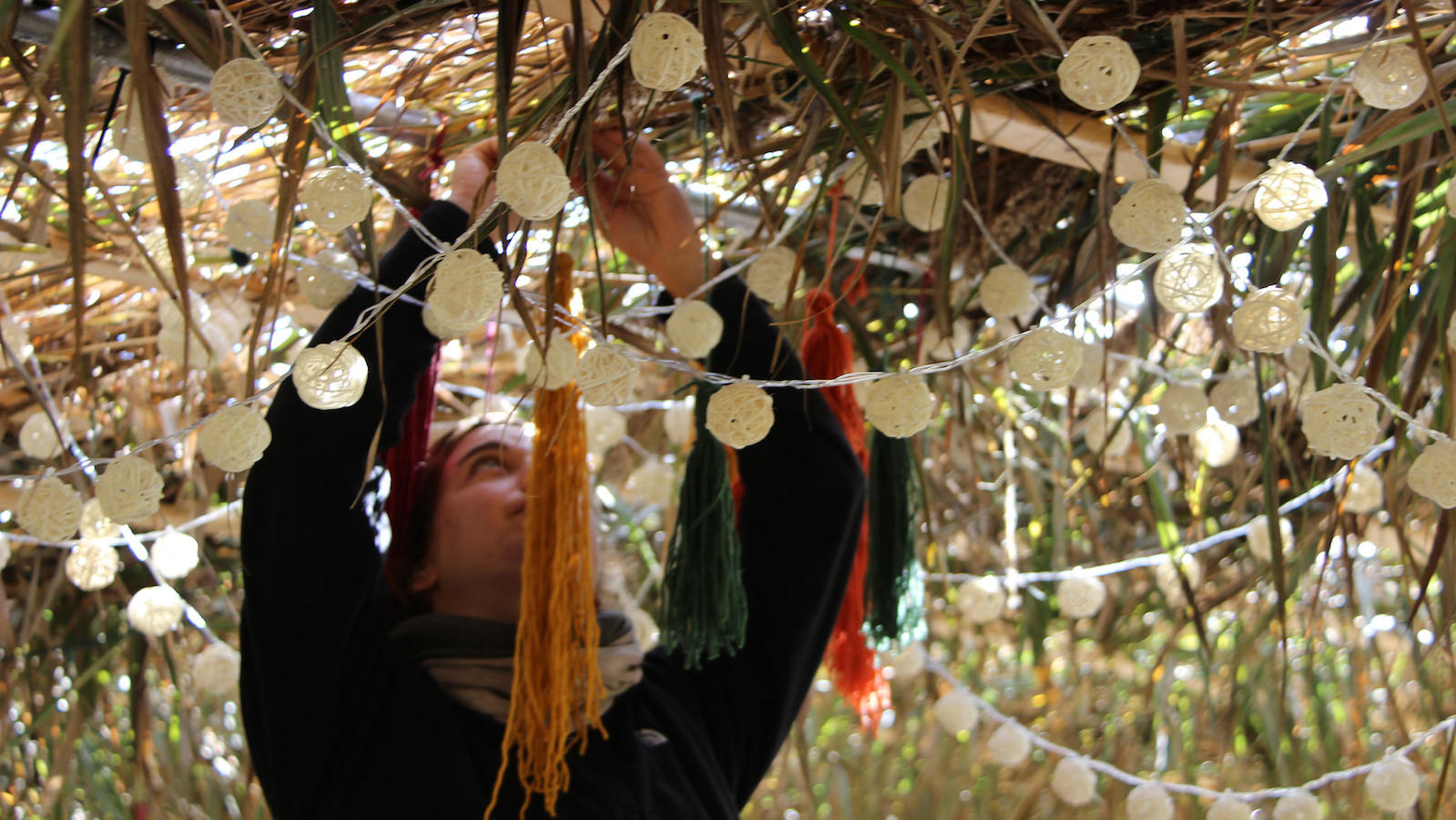 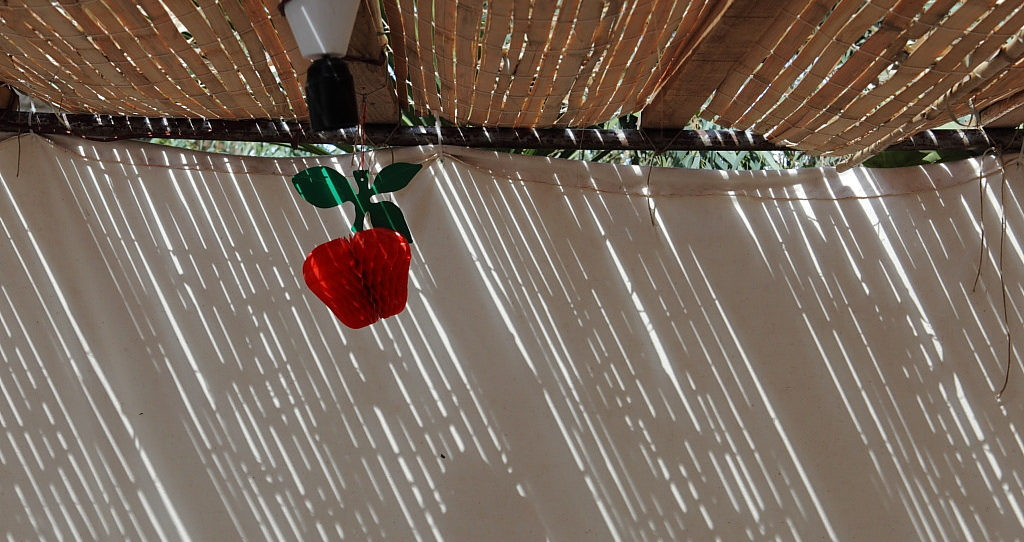