My very first Organic Epicure column was about Chaya-Ryvka Diehl, a raw-foods chef who taught a nondairy cheesecake-making workshop at Berkeley’s Chabad house in 2012, and it’s always fun to revisit people I’ve written about before. Diehl is now operating under the name Living Vision Kitchen and making three types of paleo and vegan cookies, coconut yogurt and vanilla coconut chia porridge. Her items can be found throughout the East Bay at places like Alameda Natural Grocery and Berkeley’s Three Stone Hearth. To find her products, visit thelivingvision.com.

An Oakland Jewish woman has a relationship with absinthe, the spirit known as “the green fairy,” that goes back 20 years. After starting out with Everclear, herbal tinctures and a bottle of green food coloring, Absinthia Vermut (she legally changed her first name) is now marketing her own small-batch, artisanally made bottles of absinthe. Vermut feels her obsession with it is almost bashert: While she knows her ancestors are Jews from Latvia, her brother’s research confirmed that her last name Vermut is “wormwood” in German, one of the herbs found in absinthe. Absinthia can be found at better bars and bottle shops throughout the city and East Bay. 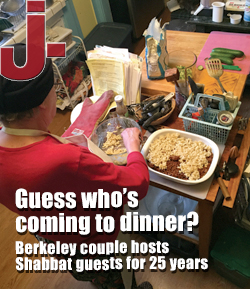