Artist Rachel Leibman has been creating her collages — colorful, vivid works with a delicate juxtaposition of text, image and line — for 18 years. But this year she’s breaking new ground at the Jewish Community Library with her show “Diaspora.”

Though her collages and mixed media art have been shown in Jewish spaces before, this exhibit marks the first time the San Francisco-based artist has created work that is distinctively Jewish in theme and reflects on her personal heritage. “I don’t really consider myself a ‘Jewish artist’ but I’m Jewish, and an artist,” she said.

The exhibit is part of a series at the library that allows artists the freedom to explore the meaning of Judaism in their own way, according to independent curator Elayne Grossbard, who approached Leibman to do the show.

Leibman chose to tell stories of the Jewish diaspora — ranging from the Jews of Shanghai to the Kindertransport to Jewish women scientists — by combining multiple-source photographs into larger images.

Many of the family photos in the collages came from a call Leibman put out on social media for pictures and stories. Some ended up driving the direction of the art, like one piece that uses images showing Jewish participation in U.S. military service. Other images came from the internet and some from Leibman herself, like the ones she used in the 36-by-30-inch “Tailor,” which combines pictures of manuscripts, photos of Jewish tailors and thread.

“My grandfather worked in the garment district, in a sweatshop, when he came over from Russia,” she said.

The exhibit also includes several quilts, which Leibman said aren’t that different from collages. “Union Made” is created from fabric that Leibman hand-dyed with things like coffee and spices, and then combined with images of union clothing labels and union members.

In Leibman’s works, faces are visible up close; farther away, the images look like geometric shapes. That’s something that drew Grossbard to the work and something she loves to see visitors wrestle with. “People become entranced,” she said.

All of the pieces on exhibit are new works, made for the Jewish Community Library exhibit. After Grossbard contacted Leibman more than a year ago, the artist said she decided not to use any existing pieces. “I really wanted to create a brand new series of collages,” she said.

Leibman grew up in Indiana and spent the next couple of decades in New Jersey. A self-taught artist, she was raised by her “secular atheist” Jewish family and married someone much alike. “Despite all of this, I’m fully a member of the tribe,” she said.

In depicting the far-flung world of diaspora Jews, from the mundane to the exceptional, “I’m being sort of a record-keeper of these stories,” she said. 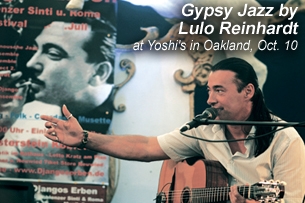