Artists show love for the city with vibrantly adorned hearts

San Francisco graphic designer Jamie Kaplan, 24, was on her first trip to Israel when she received the news: She’d been selected to take part in the “Hearts in San Francisco” art campaign for the San Francisco General Hospital Foundation. Kaplan had submitted her application on deadline just before taking off on a Birthright trip.

The annual campaign invites diverse Bay Area artists to create art on the surface of a three-dimensional fiberglass heart in one of three sizes. The hearts are auctioned off at a gala event around Valentine’s Day, with all proceeds benefiting Zuckerberg San Francisco General Hospital. A select few become permanent public installations.

This year’s “Heroes and Hearts” event will be held Thursday, Feb. 15 on the field in AT&T Park.

“It was an honor to be chosen to participate in a campaign that has become such an iconic part of San Francisco,” Kaplan said. “I grew up looking at those big hearts on display in Union Square, and now I’m one of those artists.”

Kaplan is one of at least three Jewish artists out of the 23 participating this year. It was a first for her in other respects: It was the first time she’d been recognized as a fine artist, she said, and that she’d been able to contribute to a charity with her art. But most astoundingly, it was the first time this digital artist has actually used paint and brushes for professional work.

She enjoyed it so much that she actually made three of the “mini hearts,” in metallic gold, pink and sea-green. The pieces, jointly titled “Such Great Heights,” after a song by the Postal Service, reflect the geography of San Francisco as abstract topographical maps.

“I love looking at San Francisco’s hills; not so much walking up them,” the Bay Area native said.

San Francisco resident Rita Soyfertis also made three mini hearts, although her medium is mosaic. A former costume and set designer for an underground theater group in Kiev, Ukraine, Soyfertis has focused primarily on large-scale mosaic public arts projects since immigrating to the U.S. in the early ’90s. Her project for the Hearts in SF campaign, working on the more intimate scale of heart sculptures only 6 inches tall, was a labor of love dedicated to the staff of San Francisco General.

The mosaic hearts are “wrapped” in white glass bandages and grouted in red, a tribute to the courage, compassion and patience of those who save lives in a hospital setting. Lines of swirling fog amid the buildings and bridges represent the city she has come to love.

Soyfertis says her Judaism was not something she could express explicitly as an art student in Kiev, but she nonetheless received comprehensive industrial and fine arts training there. She has since taught at many nonprofit arts organizations around the Bay Area, including the Museum of Children’s Art in Oakland and the Community School of Music and Arts in Mountain View, and continues to teach and work on public and private mosaic commissions.

Fremont artist and art teacher Dmitry Grudsky made just one heart, a 15-inch model. Having made mini hearts for the five previous years, “it’s actually much easier to work in the larger size,” he found.

Born and raised in the former Soviet Union, Grudsky was broadly trained in fine arts at the Tashkent Art Institute in what is today Uzbekistan. He studied painting, sculpture, murals and mosaics, which is the medium he likes for his heart sculptures. He describes his whimsical work, rich in blues and other colors, as “a multidimensional poem expressing the feelings of people and the feel of place.” It was inspired by a newer art form he’s seen around the city: the projections of light and images onto buildings such as City Hall.

Growing up in the former USSR, Grudsky was not able to focus on Jewish art but said he was always curious about it. His greatest artistic influence was Marc Chagall, the Russian-French painter of Jewish Belarusian origin. After some 30 years as a professional artist, “his style still affects me,” he said.

Grudsky also teaches art to elders and disabled youth and adults around the Bay. His tender, realistic watercolor paintings often feature common characters of his daily life: students, elders, street people, BART riders, humble musicians and artisans. “My art doesn’t reflect my Jewish heritage directly, but it is in my history and my roots,” he said. “I think you can see it in my interest in all humanity.”

All three artists say they are motivated by the opportunity to contribute significantly to a charity.

Since 2004, the Hearts in SF campaign has raised more than $17 million for the foundation and essential hospital programs that improve health care for all.

“I like the cause of this project — these are vulnerable people who need our help,” Grudsky said.

Kaplan said that while participating in the campaign allowed her to see herself as an artist, it was “even more amazing to be able to give back in this way, for a good cause. I never thought I’d be able to do so much good with my creativity.”

The hearts are on display in the windows of Macy’s men’s store on Union Square until Feb. 13. For information about the “Heroes and Hearts” event or the eBay auction, visit sfghf.org/events/heroes-hearts. 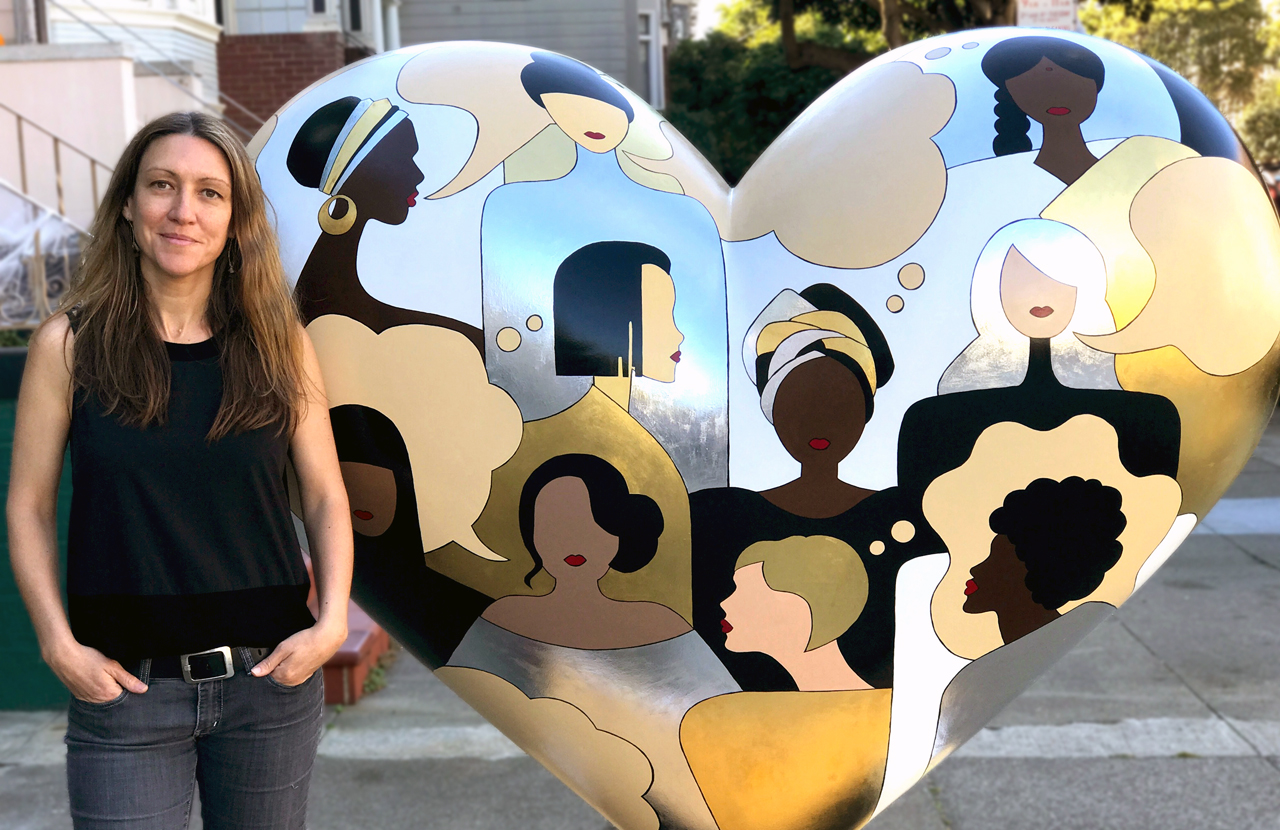