Local Muslim leader: Ties with Jews have grown under Trump

The first was the 9/11 terrorist attacks and the second was the election of President Donald Trump. Both events left American Muslims feeling threatened and appreciative of the support they have received from the American Jewish community.

ING’s founder and executive director Maha Elgenaidi said at Congregation Etz Chayim in Palo Alto on Feb. 11 that those two events forced Jews and Muslims — both minorities who have been subjected to hate crimes — to bond over their shared vulnerabilities.

“What really has brought the Muslim and Jewish communities together is Islamophobia and anti-Semitism,” she told about 35 people attending the latest EtzTalk session at the synagogue, an egalitarian congregation that says it “combines traditions from across the Jewish spectrum.”

Elgenaidi said interfaith ties gained momentum after 9/11, before which outreach was rare at mosques or among U.S. Muslims.

“There was a lot of resistance before that, but then Muslims were feeling insecure,” she said of the 2001 attacks. “And all of a sudden Muslims discovered Islam was rich in its theology of pluralism and they should begin to reach out to their neighbors of all faiths.”

When Muslims became the target of then-candidate Trump in 2016 and of the administration’s proposed travel ban in 2017, they again realized that much of their support was coming from American Jews, according to Elgenaidi.

Muslims saw Jews crowding airports with signs opposing the travel ban, which targeted Syrian refugees as well as people from other predominantly Muslim countries. They also were impressed by Jewish lawyers who offered free support to refugees and by Jonathan Greenblatt, the head of the Anti-Defamation League, vowing to register as a Muslim if a national registry was mandated by the Trump administration.

Goer said that led to a Sukkot dinner attended by members of Musalla and Etz Chayim.

“Generally, Muslim-Jewish relations in the U.S. have improved since Trump’s election, because of Jews who stood up against the Syrian refugee ban. I think that opened the hearts of a lot of Muslims,” Elgenaidi said. “That was the first time I saw Muslim centers sending representatives to a Muslim-Jewish solidarity event that took place inside a Conservative synagogue.

“I am seeing a lot more openness in that relationship, despite the fact that Muslims and Jews might disagree on the narrative of the Palestinian-Israeli conflict.”

What really has brought the Muslim and Jewish communities together is Islamophobia and anti-Semitism.

That conflict remains the biggest impediment to interfaith bonding in the U.S., she said, since many American Jews and Muslims see the relationship between their two faiths through the prism of the Israeli-Palestinian standoff — even though, Elgenaidi pointed out, most of the world’s Muslims are neither Palestinian nor Arab.

“A majority of [American] Muslims support the existence of Israel, but they can’t reconcile the great social justice efforts by Jewish groups around the country with the lack of criticism of Israel,” she said. And in the Jewish community, she added, “there is a tremendous amount of ignorance” about Muslims.

“We have to overcome those organizations that are naysayers. For you as Jews, there are organizations that watch what you say about the conflict,” Elgenaidi said. “We have those as well. There are groups that will attack you if say, you criticize the violent actions of Hamas or state your support of Israel’s right to exist. We have to be able to address all the issues associated with this conflict with courage and without fear or intimidation.

On the day of the EtzTalk, kids from the synagogue’s Teen Chai program and from two Bay Area Muslim groups had a get-together at Etz Chayim. Rabbi Chaim Koritzinsky said having Elgenaidi visit helped support temple members who already are involved in interfaith work.

The audience included men and women wearing kippot, as well as three women (including Elgenaidi) wearing a hijab, or Muslim head covering.

“I don’t think we’ve had this many hijabs in our synagogue at one time on a Sunday morning,” said Abra Greenspan, the synagogue’s director of learning. “It’s a real human-to-human connection.”

Elgenaidi said the Exodus story “is the most-often told story in the Quran” and that Moses is mentioned more times in the Quran than Muhammad. Jews and Muslims would understand each other better if they read each one another’s holy books and saw the bonds between the two Abrahamic religions, she said. For instance, reading the Torah “allows Muslims to see Jews’ relationship to the land,” she said.

“We’re in a crisis and I think Jews are actually much more vulnerable than Muslims because they are a much smaller number,” she said. “Yes, they have political power. But I think there is anti-Semitism throughout this administration. We’re also confronting Islamophobia. It’s important to understand we’re both vulnerable and we have a lot more in common than differences.” 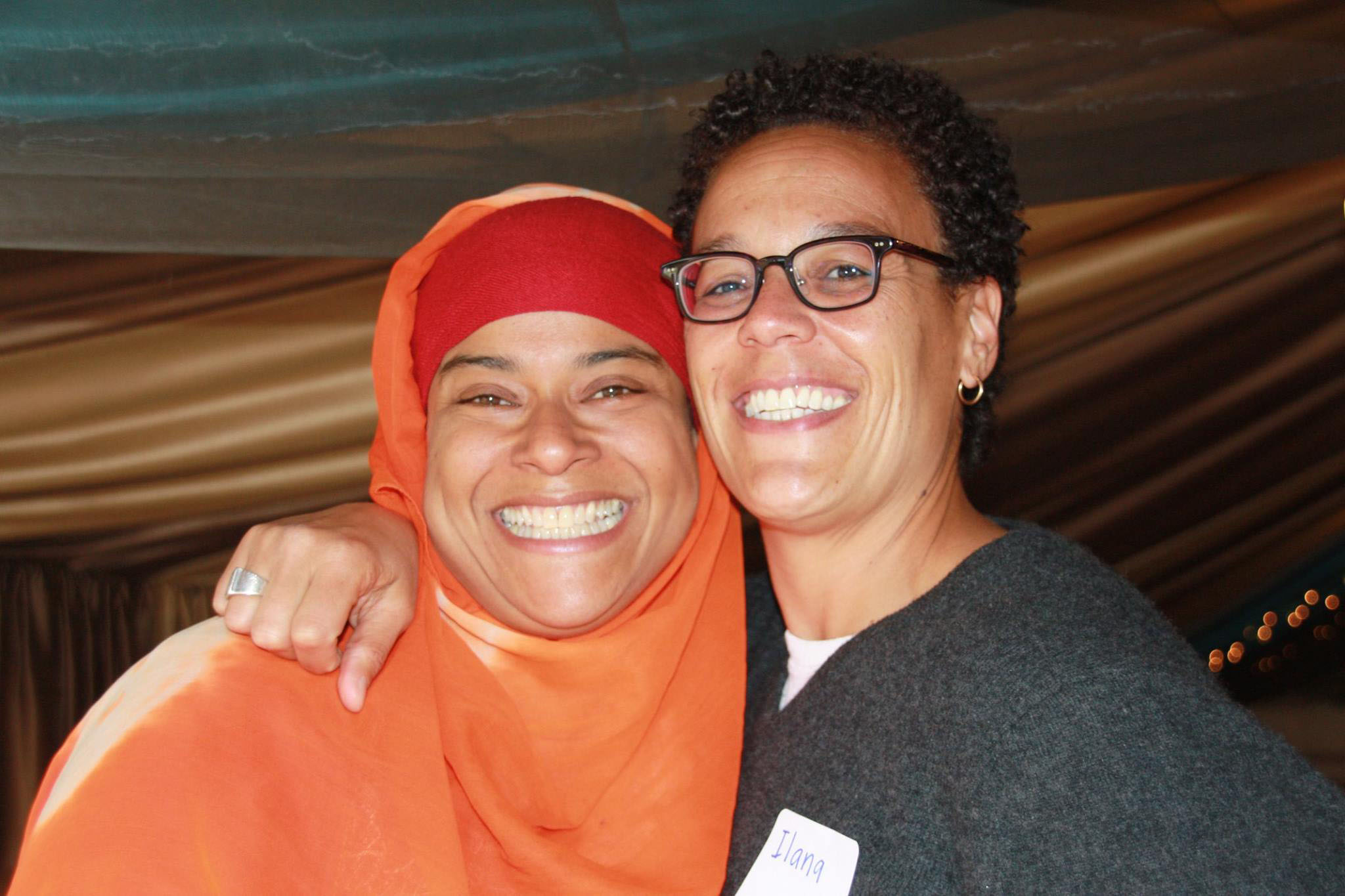 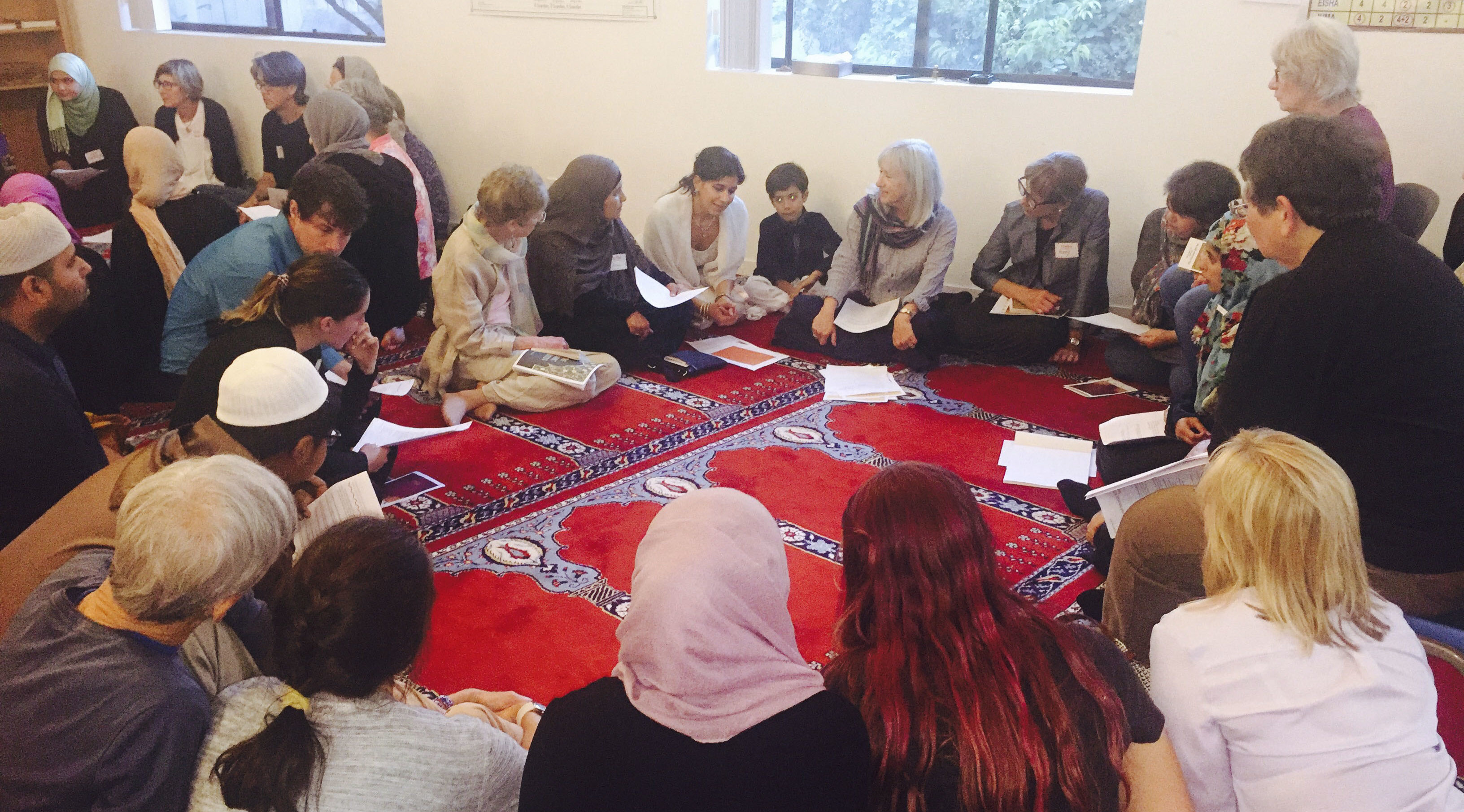