What childbirth teaches us about counting the Omer

Right now we are in a period of time on the Jewish calendar called the Omer, when we are instructed to count our days. In our agricultural cycle, this 49-day period between Passover and Shavuot marks the start of the barley harvest. In our spiritual cycle, it marks the time in which we move from liberation to revelation.

As the Torah commands, “You shall count from the eve of the second day of Pesach, when an omer of grain is to be brought as an offering, seven complete weeks.” To count the Omer, Torah commands us each night to stand, recite a blessing, and verbally count the number of days and weeks since Passover until we reach Shavuot.

This week’s Torah portion, Tazria-Metzora, offers a way to understand the importance of counting days through the lens of a woman who has just given birth. The first part of this week’s double Torah portion, Tazria, translates as “one who bears seed,” and begins with instructions about the time periods of ritual impurity (tumah) and purity (taharah) observed by a yoledet, a woman who has just given birth. Differing slightly depending on the child’s gender, Tazria instructs the yoledet to count the days of tumah, a time period that amounts to 40 days for a male child and 60 days for a female child. During this time she is restricted from certain religious acts, as well as from having sex.

Some scholars view this as a legislated time for the yoledet to heal physically and emotionally from the intensity of giving birth, free from the sexual demands of her husband and religious obligations. Having given birth twice, I can speak to the enormity of this task from a personal place. It requires the acceptance of the destruction of one’s previous self, the fact that one is now forever bonded to and responsible for another living being, and the fact that one has touched the realm of Divine by bringing forth new life and now has to retreat back to the mundanity of diapers. To be pregnant is to embody the paradigm of potential and possibility. To be a parent is to do the daily service to nurture and grow that potential into actuality.

The yoledet does not count in the same ritualistic way that we are commanded to for the Omer. In his work Ha’amek Davar, the 19th-century rabbinic commentator known as the Netziv suggests that when the Torah speaks of counting in a ritualized process, it generally refers to keeping track of time on a mental plane. It is, in many ways, an intellectual exercise. The yoledet, by contrast, keeps track of time on an embodied plane. It is escapable, a part of her. Between her time of tumah and taharah, she counts every cry of her infant, every ounce of milk, every uterine contraction. There is nothing metaphorical about her counting.

Perhaps our counting isn’t meant to be metaphorical, either. As it says in the Mishnah, on Passover “You are to see yourself as if you personally are going out of Egypt.” The story of the Exodus is one that tradition instructs each of us not only to tell, but to experience. We are commanded to embody this process of spiritual rebirth.

In her essay “Tumah and Taharah: Ends and Beginnings,” scholar Rachel Adler expands on the significance of the ritual states between which the yoledet moves: “Tumah is the going down into darkness … Taharah is the re-entry into light.” Like the yoledet, before Passover we, too, were in the darkness of mitzrayim — the narrow straits. Now, having burst through the sea onto dry land, we find ourselves exhausted, exhilarated, perhaps a bit traumatized from the ordeal, in a process of shedding what has been and unfurling into what comes next.

Passover marks the birth of our liberation, Shavuot, its culmination. Our counting focuses our attention on the importance of the days in between. What would it mean for us to take that which we birthed in the process of liberation at Passover as seriously as the yoledet takes her tasks? What would we be counting? How might our counting change us? And, come Shavuot, what revelations might this bring? 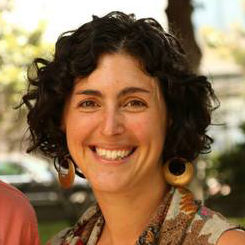 Rabbi Adina Allen is co-founder and creative director of the Jewish Studio Project in Berkeley. She can be reached at [email protected].