Visiting grandma’s grave: much more than an obligation

Cemeteries are supposed to be serene and bucolic. Not this one. It is jammed, grave-to-grave. More congested and crowded than you can imagine. More shtetl and ghetto than park. Still no matter. The purpose of my visit was obligation, not prayer or meditation.

All I know about Esther Schoenfeld (1875-1928) is that she was born somewhere in Russia; emigrated with her husband, Morris Galatz, from Romania; that she had given birth to at least six sons; that one of those sons died on Ellis Island when a cauldron of boiling water spilled on him; that she had a hard life, was sick most of my father’s life and died at the age of 53.

In the years since my parents have passed, the annual bills for upkeep of my grandparents’ cemetery plots have come to me. Each year I dutifully — and mechanically — pay them. For a moment, I would wonder about the condition of the graves. Were they properly tended? Were the headstones in good condition? Is the cemetery “nice”? Yet, despite my multiple trips to New Year City each year, I never took the time to visit the graves.

With this year’s bills, I vowed to go the cemetery and inspect the graves. I’m not sure why. A belated sense of duty? Guilt? Curiosity?

Although generally a sentimental person, I didn’t view this stop as anything more than a formality. Check the box. Be done and be gone.

Upon arriving in New York City, I mentioned my plan to my good friend, Laura Shea, who insisted on joining me. I told her it was completely unnecessary. “No big deal,” I declared. Again, she insisted.

We left Manhattan early. It was rainy. Of course, it was rainy. What trip to a cemetery doesn’t start without a little rain?

My grandparents are buried at Mount Hebron Cemetery in Flushing, New York. The first burial there was in 1909, and since then there have been more than 217,000 burials there.

At the main office, I was given a map and asked a question that gave me pause: Was I interested in paying for perpetual care on the two plots? Putting the dollars and cents of the question aside, I tried to picture this cemetery in the years 2050, 3050 and on and on and on. It made my brain ache and I deferred an answer for a future date.

Even armed with a cemetery map, I found it challenging to locate my grandmother’s grave among the almost quarter-million souls buried there.

Given the family’s finances in 1928, I expected to find a small headstone. After 15 to 20 minutes, peering down at grave markers close to the ground, I stood up to stretch my back. In the distance I saw a monument, one of the largest in that section of the cemetery. Out of curiosity, I went over to look. It was my grandmother’s, and on it, her photograph. The photo was clear and crisp, like it had just been taken. And the face, oh, that face. It was like looking at my father — the same sweet, chubby cheeks. The words on the headstone, at least the ones in English, read: “Beloved Wife and Dear Mother.”

The custom of adorning a Jewish headstone with a photograph is controversial, considered by observant Jews to smack of worshipping graven images. But I can only say that I am grateful my grandma’s picture is there. It helped lead me to her grave, and it drove home the physical connection to my father and to me.

Clearly, this large, stately headstone had been added many years after her burial, when the family had money to spend. Who had done it? My grandfather? From the few things I knew about him, I doubt it. He didn’t sound the sentimental kind. More likely, my father and his four brothers.

None of those men are alive. Yet this memorial honoring Esther still stands. No one has likely stood before it for many years, but still … it is here, proclaiming that once there lived a woman who was loved and respected enough to have this fancy headstone with a photograph emblazoned on it through an expensive porcelain baking process.

My grandmother died without witnessing the lives her sons would lead and without meeting their spouses or her nine grandchildren. She never got to share in their joys or accomplishments. Yet, through them/us, something of her continues.

As I stood there thinking about how little I knew of my father’s childhood or of his mother, I simultaneously felt wonder and joy. I had learned something profound about their love for one another, and the enduring legacy of that love, caring and respect that continues to shape my family’s values and behavior.

According to my mother, my father carried great guilt that somehow, even though he was only a young boy when his mother died, he should have done more to help her, to “save” her. I believe that feeling inspired him to be such a caring person to so many people. The vastness of his kindness was made abundantly clear at his funeral, where I lost count of the people, many of whom I had never met, who came up to me and recounted some good deed, favor, loan or word of encouragement my father had offered in a time of need or despair. I think this generosity of spirit was, in no small measure, my grandmother’s legacy. It is one my three brothers and I have honored all our lives even without knowing that its source extended beyond our parents’ teachings and values.

The few minutes I spent at Grandma Esther’s grave were among the most profound moments of my life. I am not a spiritual person, but in that crowded, quiet cemetery, I felt an intense connection to her. We never met, but in that place — with that sweet photograph and lovingly inscribed message — she became known to me. She became real.

Before walking away, I placed a small stone on the monument and pledged to return. My next visit will not be an obligation. I want to return and again pay my respects to this woman who now warms my heart. 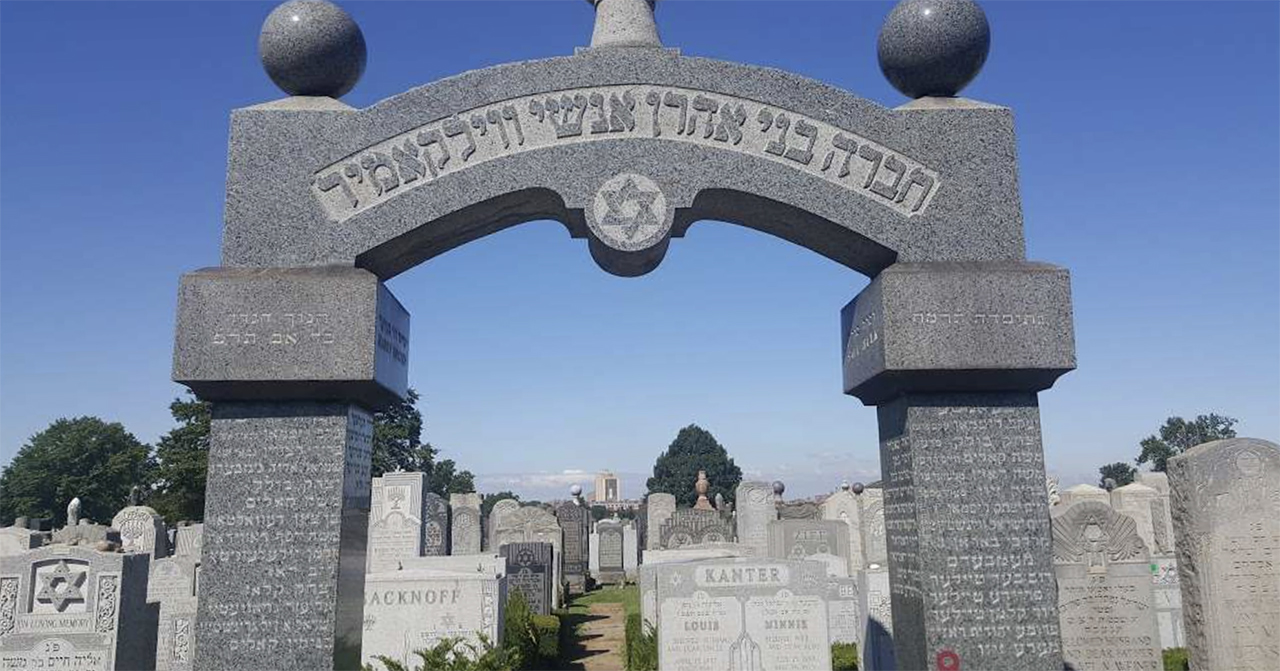