The Bay Area Jewish community and its allies are coming together tonight in the wake of a horrific shooting attack this morning at a synagogue in Pittsburgh, Pennsylvania that killed 11 people and injured six more.

The shooting, which is being called a hate crime, was the worst mass killing of Jews in American history.

A number of memorial gatherings are taking place tonight and tomorrow in the Bay Area.

Bend the Arc is organizing a Havdalah vigil tonight at 8 p.m. at Lake Merritt in Oakland, near the corner of Euclid and Grant, and a separate vigil also at 8 p.m. at the Contemporary Jewish Museum, 736 Mission Street in San Francisco; and Congregation Beth El is hosting a Havdalah Vigil Against Hate at 9:15pm, 1301 Oxford Street in Berkeley.

In addition, a number of local synagogues are holding special memorial services tomorrow, Sunday Oct. 28. They include an interfaith memorial at noon at Congregation Emanu-El at 2 Lake St. in San Francisco; a 7 p.m. service at Congregation Beth Am in Los Altos Hills; and a vigil at Kol Shofar in Tiburon at 6:30 p.m.

The CBS affiliate KDKA in Pittsburgh reported that the shooting occurred at around 10:20 a.m. during a bris circumcision ceremony at The Tree of Life, a 150-year-old Conservative congregation in the Squirrel Hill neighborhood, which has a substantial Jewish population. Some 100 worshippers were at the synagogue, which was holding three services at the time.

As of press time, no names of the dead or injured have been released. Among the injured were a 70-year-old male and a 61-year-old woman. The man had injuries to his torso and was in critical condition. Four police offers were wounded.

The alleged gunman, a 46-year-old white male named Robert Bowers, shouted “All these Jews need to die,” according to reports.

Pittsburgh Public Safety Director Wendell Hissrich called it a hate crime, which puts it under the purview of the FBI.

Bob Jones, the FBI official from the Pittsburgh office in charge of the bureau’s investigation, at a late afternoon news briefing called it the ‘most horrific crime scene” he has seen in his 22 years with the FBI.

Bay Area synagogues and Jewish institutions have sent out alerts to their email lists, expressing horror at the attack, sympathy for those affected, and telling local Jews that security measures are being tightened.

The  S.F.-based office of the Anti-Defamation League’s Central Pacific region today urged Jewish  institutions and organizations to “revisit and reassess their security plans, measures, and procedures.”

Jewish Community Relations Council executive director Abby Porth said that Bay Area Jewish institutions take security very seriously, and that her organization has “worked with the State of California to ensure that Bay Area Jewish institutions receive millions of dollars in Homeland Security grants to protect our community members. The state and Homeland Security understand that the Jewish community is particularly vulnerable to terrorism, and at the same time we are also safe to be in our institutions, to celebrate Jewish life and to engage in community.”

Bowers surrendered to a SWAT team on the scene. He was taken to a hospital, Hissrich said, but did not offer details.

On screenshots from his suspended account on Gab, which bills itself as a free speech-oriented alternative to Twitter, Bowers assailed the Jewish organization HIAS, writing:

“HIAS likes to bring invaders in that kill our people.

“I can’t sit by and watch my people get slaughtered.

“Screw your optics, I’m going in.”

HIAS is a Jewish organization that provides assistance to refugees from around the world who immigrate to the United States.

Bowers’ account was rife with anti-Semitic conspiracies. While he supported some of President Donald Trump’s policies, he also posted conspiracy theories about Jews and the “deep state” controlling the president.

Police said that at least three officers were hit in the gunfire exchanges.

Reaction to the massacre from national and Bay Area-based Jewish organizations came swiftly.

“We are shocked and heartbroken by this morning’s shooting at the Tree of Life Synagogue in Pittsburgh,” said the S.F.-based Jewish Community Federation and Foundation in a statement. “Our hearts and prayers go out to those affected by this senseless, violent and hateful act.

“The safety and well-being of our Jewish community, including synagogues, JCCs, schools and service organizations, remains a top priority. While we have no reason to believe there is a heightened threat to our community at this time, we will continue to review the security situation with our community and law enforcement partners in the days to come.”

“There are no words to express how devastated we are by the events in Pittsburgh this morning,” HIAS said in a statement. “As we try to process this horrifying tragedy, we pray that the American Jewish community and the country can find healing.”

In a statement, ADL CEO Jonathan A. Greenblatt said, “Our hearts break for the families of those killed and injured at the Tree of Life Synagogue, and for the entire Jewish community of Pittsburgh. We believe this is the deadliest attack on the Jewish community in the history of the United States.”

B’nai B’rith International President Charles O. Kaufman and CEO Daniel S. Mariaschin said in their statement, “We are horrified by the murders of worshippers this morning at Tree of Life Synagogue in Pittsburgh. The depth of our grief is immeasurable. We are living in an unparalleled toxic atmosphere of hate that seems endless. While we welcome politicians’ thoughts and prayers when murderous rages of hate occur, that must be followed by action on many levels. Tolerance and mutual respect, plus sensible gun control – especially for automatic weapons – are needed now.”

Locally, Oshman Family JCC CEO Zack Bodner said, “We are heartbroken and angry at this vicious attack on the Jewish community, and we stand in grief and solidarity with the community and the families of the victims of this violence. May their memories be for a blessing.”

The San Francisco Interfaith Council urged Bay Area residents to “come together as a community with our Jewish sisters and brothers, to demonstrate our solidarity and resilience and reject the normalization of violence against the Jewish community or any community in our country.”

The JCRC’s Porth said that while each Jewish institution will take measures it deems will best protect those who come into their facilities, “We believe that the answer to gun violence is to do what the majority of Americans want done by Congress: to restrict guns and enact sane gun control laws.”

Added Porth, “We’re devastated by the anti-Semitic terrorism in Pittsburgh, and carry in our heavy hearts the memory of those who were killed. The antidote to anti-Semitic violence may sound counterintuitive but it is to come together with people of all walks of life and diverse backgrounds and be even more public in our expression of Jewish values and aspirations for our broken world.”

San Jose-based organization Islamic Networks Group said in a statement, “As Americans, we stand in solidarity with our Jewish brothers and sisters to say, we will not tolerate these acts of bigotry, hate, and violence. As Muslims, we know too well how it feels to be afraid in our own houses of worship.”

ING is directing their supporters to a Muslim-led crowdfunding campaign to support victims of the shooting. “As they did previously after the desecration of Jewish cemeteries, Muslims are supporting their Jewish brothers and sisters,” the statement said.

The President said the outcome of the shooting “would have been far better” if the synagogue had more armed protection inside.

“This is a case where if they had an armed guard inside, they might have been able to stop him immediately,” Trump told reporters just hours after the shooting. “If they had protection inside, the results would have been far better.”

Trump also said those who commit violence inside a house of worship should receive the death penalty.

“When people do this, they should get the death penalty and they shouldn’t have to wait years and years,” he said. “They should pay the ultimate price.”

The president repeatedly referred to the synagogue shooter, identified as 46-year-old Robert Bowers, as a “wacko,” a “maniac” and “crazy.”

Trump’s comments drew condemnation on social media from many who saw him as blaming the synagogue for the incident. U.S. Rep. Don Beyer, D-Va., criticized the president for a “lack of empathy.”

Ivanka Trump, who is Jewish, said she stands with the Jewish people and called the gunman, identified as 46-year-old Robert Bowers, a “depraved bigot” and anti-Semite. 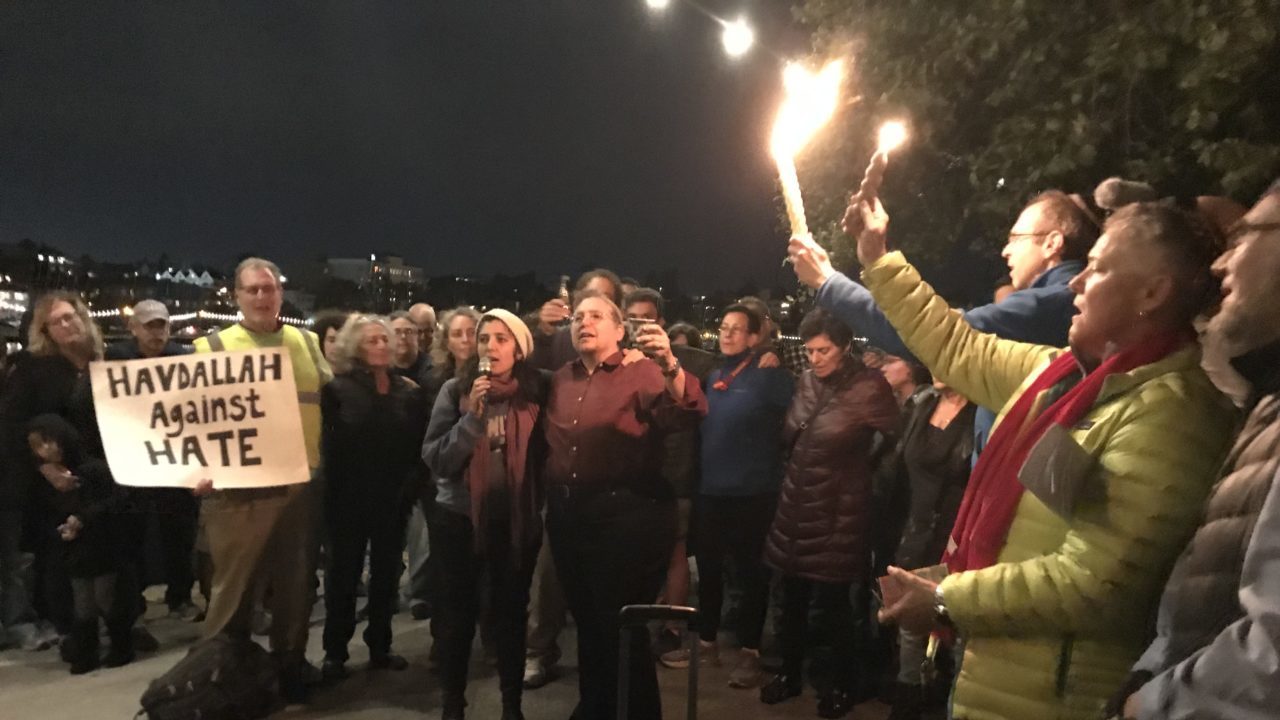