The cataclysmic event took place in Germany 80 years ago, on Nov. 9, 1938. For two days, Nazi thugs rampaged across the country, destroying hundreds of synagogues and businesses, murdering Jews and ushering in the darkest days of the 20th century.

Marking the anniversary in his Nov. 10 lecture, Rosenbaum pointed to the recent massacre of 11 congregants in a Pittsburgh synagogue as a troubling sign for American Jews — something European Jews know well.

With the rise of the reactionary right in places like Poland and Hungary, the ceaseless anti-Zionism of Europe’s intellectual left and anti-Jewish hatred expressed in some quarters of Europe’s growing Muslim population, Jews feel “caught in a vice,” as Rosenbaum put it.

“I know that the massacre in Pittsburgh is very much on your minds, especially when we consider immigration and the ferocious backlash against it,” he said. “What we felt after Pittsburgh — shock, anger, fear, sorrow — European Jews have felt for many years.”

With the exception of the fall of the Berlin Wall in 1989, Rosenbaum called the modern-day influx of refugees to Europe “the most convulsive event on the Continent since the end of World War II.” One ominous consequence of mass migration from the Middle East has been its impact on Jews, with Muslim extremists committing atrocities against Jewish communities in France, Denmark and elsewhere.

“From mid-2015 to mid-2016, mostly from Syria, Iraq and Afghanistan, they came at a rate of over 100,000 a month,” he said. “Germany alone took in more than a million. On a per capita basis, that would be as if the United States admitted 4 million refugees from the Middle East in one year.”

Though German Chancellor Angela Merkel had humanitarian intentions in opening the gates, refugee absorption has faced monumental obstacles, according to Rosenbaum. Acculturating the newcomers and finding them work has been a challenge, while xenophobia has skyrocketed. The swift rise of ultra-nationalist right-wing parties in Germany, Sweden, Denmark and France can be attributed directly to the refugee influx, he said.

What we felt after Pittsburgh … European Jews have felt for many years.

That shift has put anti-Semitism “on a low flame” on the right, he indicated, but hasn’t moved it entirely to the back burner, with vitriolic anti-Zionism coming from the left.

Rosenbaum, a longtime Bay Area resident who now lives in New York, is known locally as co-founder of Lehrhaus Judaica and author of “Cosmopolitans,” the definitive history of Bay Area Jewry. In recent years, he has turned his attention elsewhere, leading educational trips across Europe via Tiyul Jewish Journeys, which emphasizes local Jewish history.

Does Rosenbaum think another Kristallnacht be in the offing? Probably not.

“I don’t believe European Jewry is doomed,” he said at the event, sponsored by the Contra Costa JCC. “French Jewry, for all of its problems, is actually vibrant, and over half of the roughly 1 million Jews of Europe reside in that one country. Yes, about 25,000 have made aliyah in the past few years, but many of them have already returned to France.”

He also reminded his audience of the Jewish revival in Poland despite its rightward turn, and the fact that Germany has the fastest-growing Jewish community in the world, from about 30,000 at the end of World War II to 200,000 today.

But in a final word of caution fitting for a Kristallnacht commemoration, Rosenbaum said, “The parties of the right will turn on the Jews if it becomes politically opportune to do so.” 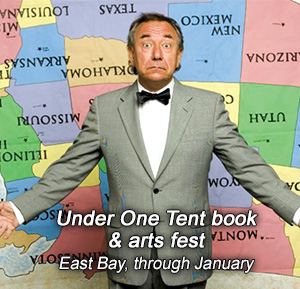