Birthright while Black: a revealing experience

Ahead of my first trip to Israel, I was nervous. Partly because I don’t like to fly and partly because “flying while Black” means that the airport can be an uncomfortable space for someone who is perceived as a potential threat. I was also nervous to go through customs in Israel because I thought and had been told that not having a “typically” Jewish surname could warrant extra questioning.

In the end, I discovered that I over-worried about arriving in Tel Aviv. Getting through customs in Israel was a breeze. I gave the officer my passport, he looked at me, printed my visa and waved me through without more than a dismissive grunt. I thought I was in the clear until my Black Jewish identity became a focus for others throughout my Birthright experience.

The first Israeli that I met was Elchi, our tour guide. Save for Elchi and two other male participants of color, I was the only Jewish woman of color and the only Black person on my bus. There were a lot of queries about my Jewish identity particularly from the East Coast participants who were unaware of non-Ethiopian Black Jews.

My first three days of the trip consisted of answering questions about my identity and justifying my presence on the trip. I did my best to use these as teachable moments and not get offended. And yet, I was on vacation. I was there to develop my own Jewish Identity. I wasn’t on Birthright to be an educator or the spokesperson for all Black Jews.

As we interacted with  Birthright participants from other trips, I began to see how white participants struggled to make sense of my presence. One evening at a bar, a woman from another Birthright group walked in with her friends. They walked all the way to the end of the bar, past the owner, past the bartender, past my two friends and before finally stopping to ask me if I knew where the bathroom was. It was noisy and it took her a couple tries for me to understand what she had asked. Noticing my confusion, she asked me the same question in Hebrew. My response was a look of further confusion. I had no idea who she was, I didn’t know why she thought I, of all the other people in the bar, would know the answer, and I don’t know why she thought I didn’t understand English. Then I realized that I had been mistaken for an Israeli and an employee, not an American Jew just as new to the setting as she was.

Most of my trip I danced between having to prove my Jewishness and people incorrectly assuming I was Israeli. I belonged there, just not with them.

When questioned, I wore my Jewishness like a shield and I found myself using my Jewish knowledge as a defense mechanism. While some people were genuinely interested in my response, I knew by the way some people asked questions it was often more of a test to “quantify” my Jewishness. These exchanges were somewhat annoying to the IDF soldiers on the trip, one turned to me and quipped, “You’re in Israel, stop being so Jewish.” That was really confusing to me. How does one stop being Jewish in the most Jewish place in the world?

The Israelis I encountered, in contrast, had no difficulty accepting my Jewishness. When they asked me if I was Jewish, there was no second-guessing, no asking if I was sure or how I was Jewish like my American peers did. I didn’t have to prove my Jewishness to the Israelis, I could just be myself. Since there are Jews with heritages from all over the world in Israel, I did not encounter the concept of “looking Jewish.” I wasn’t an  anomaly. Almost every Israeli with whom I connected with was some shade of brown. I even had the privilege of meeting with a Black man from Cincinnati who made aliyah two years prior after staffing a few Birthright trips.

That’s just the thing, in Israel Judaism and Jewishness are all around you. Since the majority of people are Jewish, being Jewish is not unique. Jewishness as an identity is an afterthought. In Israel being a Jew is something you are, in the U.S. it’s something you do. No Israelis tried to quantify or compare their Jewishness to mine. It wasn’t crazy or improbable to them that I was Jewish because there are a lot of Black Jews.

But the comfort I felt in Israel was more than being accepted by Israelis. I began to understand it better after listening to one of the architects of Birthright, Avraham Infeld, speak. He began with an anecdote about how when he made aliyah, his cousin said to him the same thing the soldier had said to me: “You’re in Israel now, stop being so Jewish.” He then explained Jews in the diaspora separate and create unique spaces for themselves to share collective memories and to pass down the covenant so our community will not be forgotten.

This helped me understand some of the disconnects I had with fellow American Jews. It’s hard to be seen as part of the group when externally you look so different. In the U.S. especially, because Jews create safe spaces for themselves, looking like you might be an outsider comes with questioning. In an effort to feel safe, they want to make sure that I am really like them.

In the U.S., Jewishness is an identity, something that you do.

After having been on Birthright, I have a deeper understanding of what it means to step into who you are. It’s not enough for me anymore to say that I’m Jewish, or show off my Hebrew and Jewish knowledge. It’s not enough to know the law, I need to fulfill the spirit of the law. Maybe next time I find myself in Israel I won’t be so Jewish, but rather I’ll have learned to live a Jewish life.

This piece originally appeared on the Jewish& blog at My Jewish Learning. 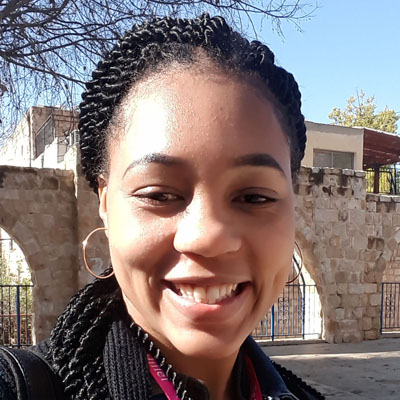 Shekhiynah Larks is the program coordinator and a diversity trainer at Be’chol Lashon, a nonprofit that advocates for global Jewish diversity. She lives in Oakland and holds a BA in politics from the University of San Francisco.