I do not speak, but I am listening. Talking about others hurts us all.

When I was small, people often spoke about me. They spoke as if I wasn’t there at meetings where important decisions were being made about my life and education. People brought their opinions to the table in an attempt to be helpful. They had impressive credentials like Doctor, and Expert, and Mother. They had the best of intentions, and they wanted the best for me.

Autism is a complex disability, and we don’t understand the neurology very well. Things some people take for granted are challenged, such as the ability to speak and to control their bodies. For years, I listened as people told each other their theories about who I am, and why I move the way I do. They shared their ideas about what it meant. It hurt because they were wrong. It also hurt when they were right. It wasn’t anybody’s intention to cause pain, but that didn’t make it any less painful. Once the words are spoken, they can’t be unspoken. Once beliefs are formed, they are very hard to undo. That is why I want to write today about lashon hara, talking about others. I believe that discussing and pointing out the problems with lashon hara is an optimal way to draw closer together and see each other’s inner beauty.

Lashon hara is not mentioned directly in this week’s parashah, Tazria. However, there is much discussion of leprosy, which our sages consistently described as the punishment for lashon hara. Lashon hara — literally “bad tongue” — is translated as talebearing, gossip, slander or talking about others. At least some of the time we all do this, and there are times when it is permissible, but in general, it is considered a serious offense. The Talmud tells us that even Moses was guilty of slander. He questioned if the Hebrews would believe God’s word. God said, “O, Moses, do you already know that they will not believe you? They are believers the sons of believers and you say to Me: ‘And they will not believe in me?’ Put your hand to your bosom! Immediately: ‘And when he took it out, behold, his hand was diseased with leprosy’” (Bamidbar Rabbah, Naso, 7:5).

When we talk about others, we diminish ourselves. We deny ourselves an opportunity to see the image of God. We replace the holiness in front of us with our own, limited ideas. Leprosy is a skin disease. It requires isolation. It is damaging to beauty and traumatic. It causes us to recoil. Like leprosy, lashon hara is a community affliction, because it hurts the talebearer, the listeners and the person talked about. It can spread. We learn from the midrash about Moses that lashon hara can even be about whole communities.

Talk to everyone in a normal voice, and wait for an answer even if it is a silent one.

In my experience, the harm to communities is the worst. You can damage an entire community when you engage in lashon hara. It hurts everyone. The autistic community has been the victim of lashon hara. You may not even know where you got your ideas, but they may form an impenetrable barrier to seeing individuals for who they really are. The silence of people who do not speak is not an invitation to speak over them, and to tell others what you think about them. That is denying them a voice of their own to define who they are and what they think about their own lives. That is not OK.

Now we must correct our ways. People must learn about the times our community has been sickened by participating in lashon hara. It is time to heal ourselves and our community. Start by learning about each other directly from each other. It is not enough to ask, “How is he doing?” You have to ask the person directly and presume that he has his own answer that may be different from what others know. Talk to everyone in a normal voice, and wait for an answer even if it is a silent one. Not everyone has a way to communicate in language, but they may develop the skill. Others may not always have support for their answer, but you can still connect.

To practice healing, you can take a moment to connect with someone in your community who gets ignored. If they don’t speak, you can do it silently. Sometimes, words get in the way. Who are they? What do you know about them? What brought you together? What do they need? What do they have to offer? What ways do they have to communicate their thoughts? In what ways can you support their communication? Music, touch, smiles — they all tell a story if we pay attention. Without speech, we have to use all of our senses to connect on a more direct level. 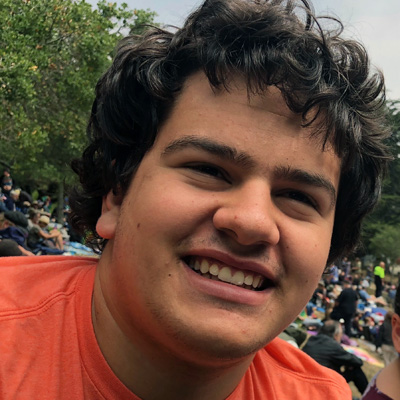 Rami Kripke-Ludwig is a 17-year-old nonspeaking autistic person and a member of Congregation Sha’ar Zahav in San Francisco.