After years at a Jewish school, moving to a secular school has been a rude awakening

This year is my first time attending a non-Jewish school. This means a lot of things are different for me now. I don’t take a daily Jewish studies class anymore, I study Spanish instead of Hebrew — and I am no longer surrounded by Jews. It has been a big transition for me. I have chosen to surround myself by Jews in many aspects of my life. I attended a Jewish day school for 12 years, I go to a Jewish summer camp every year, I am an active member of the Jewish teen organization BBYO and I attended the AIPAC Policy Conference this last month with my father.

It’s never been easy for Jews, and this past year, that has definitely been the case. With anti-Semitism spreading around the country, I have been scared at times. Last year’s shooting at the Tree of Life synagogue in Pittsburgh was the first time I was at a school where an event like that wasn’t talked about in all of my classes. Sure, the student government sent out a heartfelt email after the shooting, reaching out to the Jewish community — but that was it. Had I been at a Jewish school, like my old school, Gideon Hausner Jewish Day School, I probably would have had conversations with almost all of my friends and teachers.

After the synagogue shootings in Pittsburgh and Poway, and the circulation of an image of California teens performing the Nazi salute in front of a beer-cup swastika, a lot of emotions bubbled up inside of me. I feel anger, fear and sadness. Things never have, and probably never will be, truly easy for us as Jews, but I don’t like to wallow in self-pity. Sometimes, though, it can feel difficult to express my strong emotions about events like these to my non-Jewish friends. This is because I don’t like feeling like I am complaining or asking for pity. This has also prevented me from expressing all of my emotions about our recent World War II unit.

In the past, I have focused almost entirely on the Holocaust while learning about WWII, and it has been very different for me this year to focus on other aspects of the war. In class last year we read “Night” by Elie Wiesel (may his memory be a blessing) and we are reading it again this year, as well as watching the movie “Swing Kids.” It has been difficult for me to read “Night” from a completely analytical perspective and watch my friends laugh when the characters in the movie get emotional.

I am no longer surrounded by Jews.

When I sit in class and we read lines from Hitler’s speeches I get chills, and others kids giggle. This is not supposed to be accusatory in any way, I understand that this unit doesn’t mean as much to everyone else as it does to me, but it has been very difficult to sit in class and listen to people talking about my great-grandparents as numbers.

In concentration camps, Jews were stripped entirely of their belongings and their identities; they became numbers. We think back and study this, and we talk about how horrible it was for the Nazis to dehumanize people like that, but have we really changed? When we sit in our classes and learn about the 6 million Jews, they become numbers. It is so easy to forget that each one of those people had a life and a family and friends and an identity. There are some numbers it’s easier to think about. When you hear about a shooting in which 11 Jews were murdered, it’s not very difficult to think of 11 Jews you know — and for my classmates who don’t know that many Jews, they can think of 11 of their friends. That is a lot of people to lose, but it’s not difficult to wrap your head around the number alone. 11.

Now try to picture 6 million Jews you know. Six million of your friends. It reaches a point where the number is too big to even fathom. I don’t know 6 million people, probably not even 1 million, and I definitely can’t imagine a loss like that. Slowly, they lose their faces and their names and their identities, they become numbers once again, and it is so difficult for us to stop that.

May 2 was Yom HaShoah, Holocaust Remembrance Day, and this was the first year I was not spending it at a Jewish school. At Hausner, starting in third grade, we held a memorial service where we would light candles, write names on strips of yellow fabric, and fill vases with yellow roses. We went about the rest of the day with a certain solemnity. This year, everyone went to all their usual classes and did all their usual things. We didn’t stop to look at names hanging on slips of yellow fabric from the trees. We didn’t stand for a moment of silence next to memorial candles. We didn’t stop to remember. I didn’t try to make my friends do this, and I hardly talked about how much it hurts to think of all of the families that were ripped apart and all of the innocent lives that came to such violent ends.

I don’t expect anyone to feel how I feel about this topic, but I encourage everyone to take a moment to remember. You don’t even have to try and wrap your head around all 6 million — just imagine one. Think of someone like you, someone like one of your parents, someone like your sibling, someone like your child. Imagine one, just one, of the millions of lives lost. And maybe then, if we all remember one, they won’t just be numbers anymore. 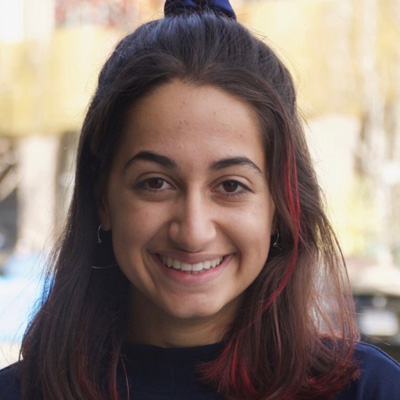 Talia Bodner is a high school freshman living in Los Altos. She is a participant in the Jewish Teen Foundation and co-treasurer of her BBYO chapter.