At the age of 20, Kali Spitzer left her home in Victoria, British Columbia, to travel north and immerse herself in the culture of her father, who is a member of the Kaska Dena, a First Nations people native to Canada.

For seven months she lived among her relatives on British Columbia’s northern border, where she learned to bead, hunt, fish, trap, and tan moose and caribou hides.

“It was so beautiful and challenging and humbling,” the 31-year-old photographer said in a phone interview from her home in Vancouver. “There was a lot of sadness, too, that came from it — not being able to grow up immersed in my culture.”

Spitzer, who until then had primarily been raised by her Ashkenazi Jewish mother, came back inspired and eager to teach others about indigenous culture. The best way to do so, she found, was through a longtime passion of hers: photography.

As part of a series titled “An Exploration of Resilience and Resistance,” Spitzer photographed a diverse range of women and gender non-conforming people, many of whom are either indigenous or mixed race. Images from that series have been exhibited internationally — including in Canada, the U.S., England and Germany — and were recently featured in National Geographic.

The exhibit includes large-scale photographs and voice recordings of the subjects telling their stories.

“The main objective is to make a safe space where we’re seen and heard, and I hope through doing that maybe some people would … have a really human connection with the people in the images,” she said.

Spitzer’s project explores the challenges of being mixed race.

“Being Jewish and native, [I was] always having people tell me that they don’t think I look native, or things like that, or just my identity constantly being questioned,” she said. “Knowing that other people go through that too, I think it’s really important to show how diverse we are and that we all fit in, in some context.”

Though Spitzer mostly has focused on her indigenous roots in her work, she also hopes to document her travel to Romania and Poland to document her Jewish heritage in future projects.

She says that even when her work does not directly address Judaism, it always lingers in the background.

“I think my Jewish ancestry informed me as a human, so therefore [it informs] everything that I do,” she said.

The Vancouver-based artist believes it is important to capture the stories of indigenous people before elders die — and with that, their culture.

“I feel there’s more of an urgency for documenting our culture, our language and our people, because we’re kind of in a race against time in losing our knowledge,” she said.

Spitzer’s father, when he was a young child, was taken away from his family as part of a Canadian government policy in which indigenous youths were sent to church-run residential schools. The goal of the program, which ran until 1996, was to assimilate native children into Canadian society.

“Children were forcibly removed from their homes and the land and placed in these really abusive institutions where the goal was assimilation and to kill the Indian and assimilate into white, religious culture,” Spitzer said. “I think that a lot of the time my work focuses more on that because it’s so recent.”

Spitzer said that during her studies in Santa Fe, New Mexico, at the Institute of American Indian Arts and a community college, she became interested in alternative photographic processes. She started using a wet collodion, or tintype, process, in which a piece of metal or glass is coated with lacquer or enamel to develop a photograph. The result is a weathered, antique-looking image. In her work, Spitzer’s subjects appear almost illuminated against a dark or uneven background.

“There’s a lot of different variables to it and it’s definitely possible to get a really clean image, but I also like those variables and not really knowing how it’s going to turn out,” she said.

“There was definitely a lot of challenging parts of it, to come from two pretty oppressed people in different ways,” she said.

But she sees no conflict between her roots.

“I thought they were always both complementary of each other.” 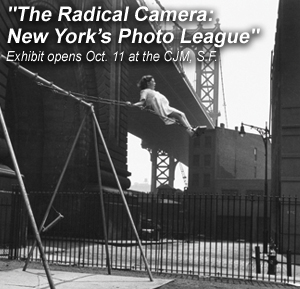