The controversy over Jewish and Israeli symbols at the DC Dyke March, explained

Is an LGBTQ parade banning flags with Jewish stars? Yes. Not really. Kind of.

The D.C. Dyke March, a social justice-focused parade for, in its words, “queer liberation,” happening today, announced that it is not welcoming any “nationalist symbols.” That includes Israeli flags and American flags, the only two mentioned specifically in their ban. More controversially, rainbow flags with Jewish stars in the center will be banned because, according to organizers, they look too much like Israeli flags and are thus a symbol of “violent nationalism.”

Palestinian flags will be allowed.

Critics of the policy are calling it not just anti-Israel, but anti-Semitic. Some activists plan to bring the flags despite the policy, come what may.

So why does the policy exist? Is the policy anti-Semitic? What will happen if the flags show up?

Here’s what you need to know.

What is the DC Dyke March?

The DC Dyke March is an alternative parade to the main LGBTQ parade taking place this weekend in Washington, D.C. Its politics have traditionally been to the left of more mainstream pride marches. It’s one of a movement of Dyke Marches that have taken place nationwide.

The Dyke March’s description on its fundraising page says it’s focused this year on combating gentrification and displacement.

“Our goal is to encourage activism within our community and center transwomxn, queer womxn, nonbinary, lesbian, and other dyke identities who are oft-marginalized by the mainstream LGBTQ movement,” the webpage says, using an alternative spelling for “woman.” “We believe Dyke is not a sexuality, but a political identity centered on solidarity in each other’s struggles and a belief that none of us are free until we all are.”

If it’s focused on gentrification, why is everyone talking about Israel and Jewish stars?

One of the march’s policies is to discourage “nationalist symbols.” According to organizers of the march, that includes Israeli flags and American flags, which are the only ones they have mentioned specifically.

But the organizers are taking that policy one step further, and asking marchers not to bring a longtime symbol of LGBTQ rights, rainbow flags, with Jewish stars superimposed on the center. March organizers say those flags are reminiscent of the Israeli flag, which they say could feel threatening to Palestinian marchers. “We choose to prioritize Palestinian lives and justice in Palestine over lazy symbols,” organizers write.

The policy is the latest instance of a progressive group saying that showing support for Israel in any form is incompatible with their politics. While a majority of American Jews lean left politically and support the state of Israel, the hard left increasingly embraces a boycott of Israel and views it as a violator of human rights, if not illegitimate.

So the march is banning Jewish stars?

No, though they are restricted from that flag design. Jill Raney, a Dyke March organizer who’s also a member of IfNotNow, a Jewish leftist group critical of Israel, said that other Jewish symbols are welcome, as are Jewish stars in any other context. Raney said that a rainbow flag with a Jewish star in the corner would also be fine.

The march’s Jewish organizers, Raney said, are the ones who formulated the policy.

“I am so sympathetic to the frustration and the anger and the hurt that a lot of Jewish dykes are feeling about why can’t we have our symbols exactly how we want to,” Raney said. “Some folks have legitimate fear and frustration around the reality that the Israeli government took these Jewish symbols and tied it so profoundly to a lot of violence.”

Many LGBTQ Jews and their allies say the effect of the policy is anti-Semitic. Writes Peter Fox in the Forward: “What the march has done is ban all queer Jews who feel any connection to Israel — which is itself anti-Semitic given that Jews are not collectively responsible for the actions of other Jews or for the Israeli government, any more than Muslims, blacks, Asians or any other group of people are.”

Raney was focused on crafting policy around Jewish symbols, and is unaware of any policy about, for example, a Christian cross or Muslim crescent, although those appear on dozens of countries’ flags. And the march does not maintain a list of accepted and rejected national flags, though American flags would also be restricted because, Raney said, the United States commits human rights abuses.

But one flag that is allowed, Raney said, is the Palestinian flag.

“Palestinian flags are allowed because we believe they represent the hope for freedom for the Palestinian people,” Raney said. “The symbols of liberation are the whole point of Dyke March. Symbols of governments that cause human rights abuses are not welcome.” She didn’t explain how the Palestinian flag is not nationalist.

How is the Jewish LGBTQ community responding?

Many groups are aghast. While the Jewish star is a central symbol of Israel, it’s also a longtime symbol of Judaism that long predates Zionism or a modern Jewish state. And LGBTQ leaders say placing the central symbol of one’s community at the center of a rainbow flag is standard practice in the queer community.

“The star of David, while it has been used in a political context, is a cultural, religious and spiritual symbol,” said Patti Nelson, secretary of the board of Bet Mishpachah, a D.C. LGBTQ synagogue. “It is a symbol that has been used for centuries to unite us. It’s also a symbol that’s been turned against us and that we’ve re-embraced to represent our Jewish community, which is vast and diverse.”

Local and national Jewish organizations have also released statements criticizing the flag restriction. And the National LGBTQ Task Force withdrew as a partner organization from the march due to the policy.

“The Jewish Pride Flag is a symbol that represents the greater LGBTQ Jewish community – around the world and of many perspectives,” the Task Force said in a statement. “Additionally, we are disappointed that this action distracts from the appropriate and needed focus on DC residents and housing policies that favor gentrification.”

Hasn’t this happened before?

So what’s going to happen at this march?

A contingent of people plans to march with the Jewish Pride flags anyway. A.J. Campbell, one of the first marchers to inquire about the policy, said she feels it is making her choose between her Jewish and queer identities.

“The march belongs to all of us,” she said. “I’m hoping for something like a reconciliation here. I actually hope that we can, after the march, talk about this and see if there’s some ground we can cover together.”

Zioness, a women’s group that demonstrates openly as pro-Israel activists in progressive spaces, will be organizing a contingent.

“[T]here will always be individuals seeking to drive artificial wedges between coalitions of solidarity,” Zioness said in a statement co-signed by the Jewish Democratic Council of America and A Wider Bridge, an organization that supports Israel and its LGBTQ community. “Today, those individuals seek to undermine queer, Jewish and Muslim voices working to advance all of our communities, using the Israeli-Palestinian conflict as a pretext for division.”

Raney said that if people do bring the flags, there will be a group of “trained marshals who are Jewish” who will ask the marchers to put the flags down and, if necessary, leave the march, though Raney added that they will not use force to remove the flags or marchers. 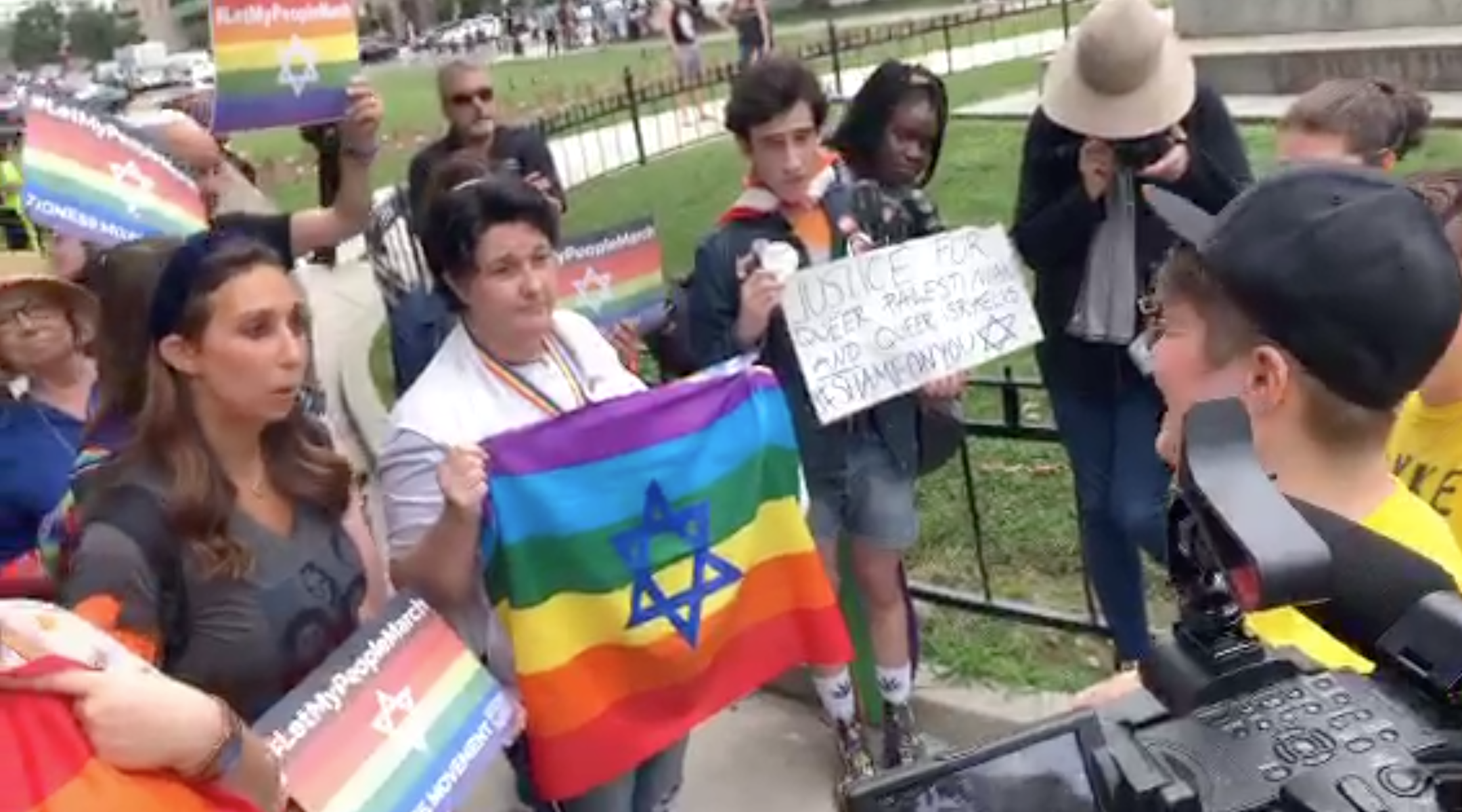 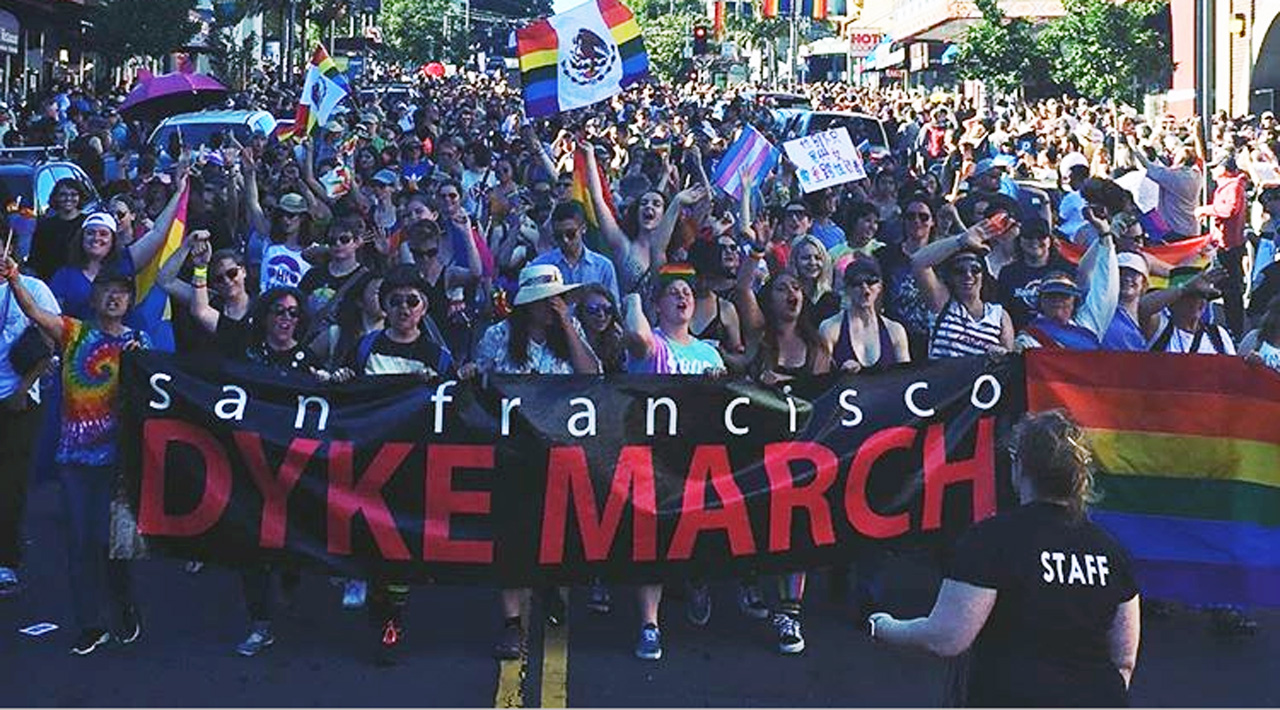 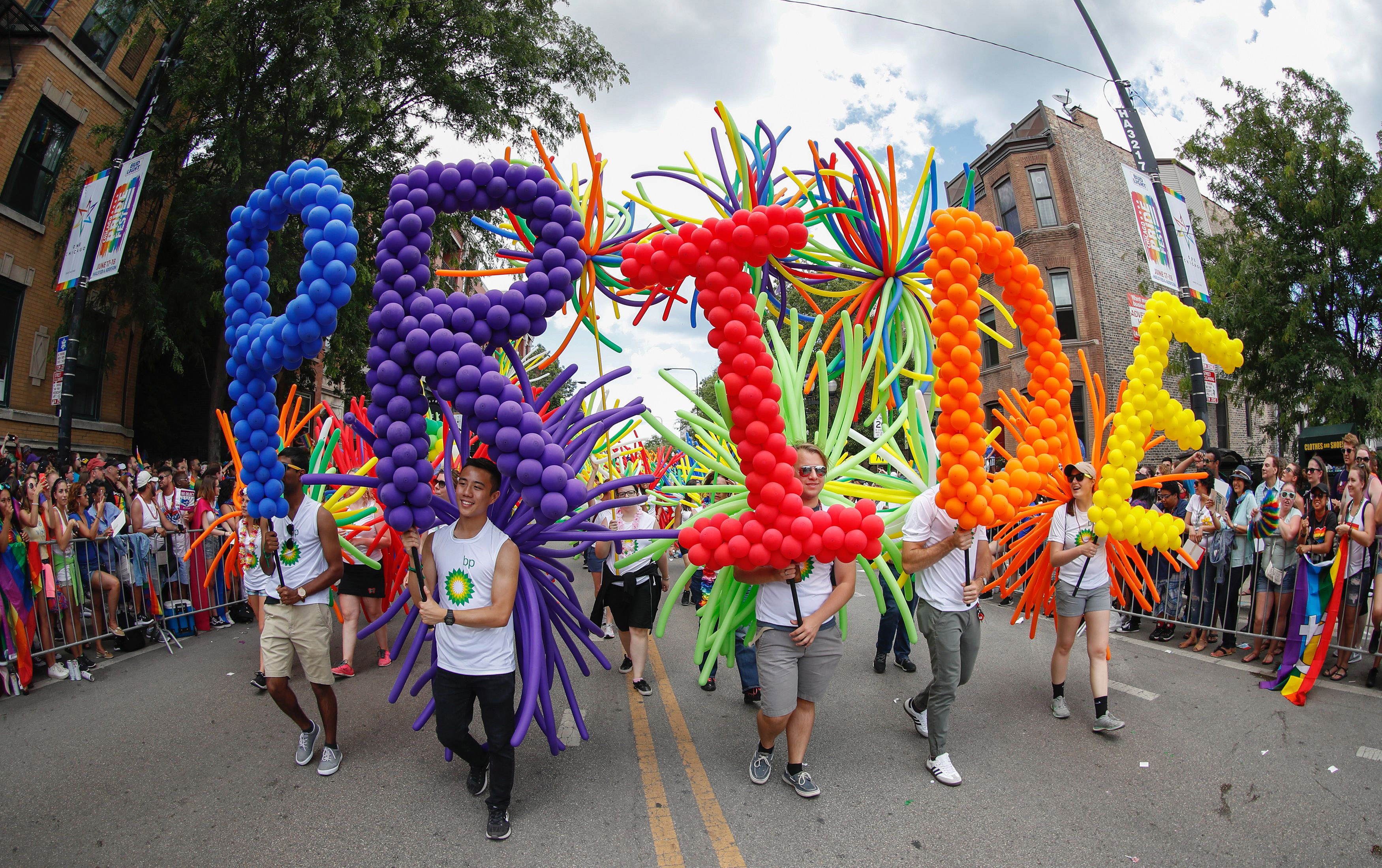