Overcoming my Jewish imposter syndrome at my kids’ after-school program

I’m here to tell you about how I finally rid myself of my Jewish imposter syndrome — with the help of my kids’ after-school program.

San Francisco is a strange place to be Jewish. Unlike most other cities across the United States — and the world — San Francisco’s Jewish communities are scattered across the city like poppy seeds on a bagel.

You can come across a synagogue, a community center or Chabad house in pretty much any part of town. Even the hottest Jewish restaurants — Oren’s Hummus, Frena Bakery, Wise Sons Deli — are distributed all around. It’s as if the city threw Jewish confetti into the air and watched it land willy nilly.

For a Minnesotan like me, the absence of a Jewish hub makes me feel like I’m Alice in Wonderland. I don’t know which way is up.

Growing up in the Twin Cities, there were only a few places where one could really “be Jewish” — at Temple or the JCC or in one of the few Jewish delis. Outside of that, being Jewish meant “not Christian,” and sadly smiling while everyone wished you Merry Christmas from Thanksgiving until Dec. 25.

My mother is Jewish, and my father is Chinese, and this adds another layer of complexity to my Jewish identity. I loved going to temple on Saturdays, singing songs, learning the stories and being a part of the community. But, sadly, I had to work hard to fit in, because … racism.

Compared to all the Jews I knew, my two sisters and I looked and felt different. And it wasn’t just a feeling, though the only racial slur ever thrown at me was while I was at Jewish sleepaway camp. My beautiful, darker-skinned sister Anna had it much, much worse. Kids teased her in Saturday school for being so brown.

So it was a surprise to me when I ended up marrying an Israeli named Ari. We met at the University of Michigan Ross Business School and married in 2009. A rabbi married us under the chuppah. But between my Reformish-meets-spiritual Judaism and Ari’s nationalist-but-not-religious Judaism, we had a hard time finding the overlap. But it didn’t really matter.

After we gave birth to our first son, Ben, in 2011, my ambivalence vanished. I’d emphatically tell my husband (emotive discussions are required with Israelis): “This is America! If you don’t do Jewish things, you’re not Jewish! How will our kids even know what being Jewish means?” After a handful of debates, we agreed that we had to build some structure around our “being Jewish” — whatever that was.

We got lucky by landing a coveted spot at the Claude and Louise Rosenberg Early Childhood Education Program, one of three JCCSF preschools in San Francisco. I say “lucky” because, for the first time, we got to be around families just like us, including my friend Naomi Rudolph. We were all families with two working parents, mostly Jewish, and wanting to celebrate Jewish values and culture. But three short years later, it was over and we were entering elementary school.

We picked our heads up after the stressful kindergarten placement process, and focused on after-school programs. We wanted a Jewish program, focused on Jewish values, and wanted Ben to learn Hebrew. But no such program existed.

Fortunately, Naomi, an experienced educator at San Francisco Day School, was there with a great idea: We should start it ourselves.

At this point, I should probably mention that I have a compulsive habit of starting big things. I’m currently co-founder and CEO of a startup called Hostfully. So perhaps Naomi took advantage of this urge — but at least it was for good reasons!

It was warm and sunny on the day that we schlepped over to Berkeley to check out a new Hebrew after-school immersion program there called Edah.

We stepped out of the car and onto the worn sidewalk under blooming trees. Through a tall, loosely latched fence and up a flight of rickety stairs to enter a sunlit-room filled with Hebrew. Just a few hours later, Naomi and I had committed to starting the first San Francisco chapter of Edah in the fall.

Each day, kids are greeted in Hebrew. They review the weather, the day of the week, have a snack and then it’s daily circle time. They learn stories from the Torah. Seems pretty basic.

But it’s not. Somewhere in between snack and circle time, Edah creates a unique sense of belonging — of Jewish belonging — for kids who come from widely different Jewish backgrounds. Some of us speak Hebrew at home, some don’t. Some go to temple weekly, some only go for High Holidays. Some keep kosher, others eat shrimp.

Somehow Edah transcends the differences by sparking a sense of Jewish belonging that comes from within the kids. It’s palpable. When the kids lead the seder, or when they passionately discuss the weekly Torah portion, they are in charge of their Jewishness. It’s their responsibility and they take it seriously. As parents, we breathe a sigh of relief, knowing that they’re finding their own path to being Jewish.

And now back to my imposter syndrome. It’s vanished because of how my son Ben feels about being Jewish and his deep connection with his Jewish friends. It’s vanished because we’ve started something Jewish that is needed, scalable, meaningful and meant to last. It’s vanished because I’ve been welcomed by my Jewish peers into a tight-knit community that is fierce in its desire to grow. I can finally set aside confusion about my own Jewish identity because I see a better path forward for my kids: Ben, his younger brother, Aaron, and baby sister, Eden. 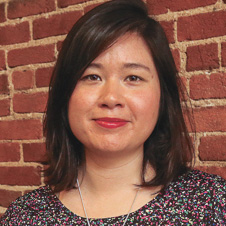 Margot Schmorak lives in San Francisco with her husband, Ari, and three children. She is co-founder and CEO of Hostfully, a venture-backed software startup in the vacation rental industry.