Alan Wald, 70, thinks ahead, but he’s good at thinking backward as well. Wald, who lives in San Francisco, searches for — and finds — “the nexus between Jews and palindromes,” words or phrases that read the same forward and backward. Then he develops performance pieces.

J.: You were first fascinated by palindromes when you were a young adult, and your interest hasn’t waned. What’s the attraction?

Alan Wald: Palindromes are miniature works of art, a kind of constrained writing that is no less valid than poetry. Writing them is like panning for gold. It’s rare when you unearth that nugget, but when you do, uncanny things happen. Sometimes the palindrome even makes a statement.

J.: Give us an example of one of your palindromes.

AW: Sure. Peace in Israel will come when Arab and Israeli parents can say, “Nosh ‘Allah-Challah,’ son.” That one is in my new show, and Carolyn Bass, my partner in life and on stage, passes out slices of bread labeled “Allah-Challah.”

J.: You will present that show, “Holy Palindrome!” as part of a Tu B’Av event at 7 p.m. Aug. 24 at Congregation B’nai Emunah in San Francisco, celebrating the holiday of love. Rabbi Pam Frydman says you are a “master of palindromes” and through them, you combine “insights of Torah with a bit of humor and a hint of sarcasm.” Talk a bit about the show.

AW: I dress as Moses and Carolyn plays a hippie named Sunflower. First, we retrace the story of Exodus. Then we transition to palindromes in the Torah. The Hebrew language is right for the format — who better to read backward than Jews? In the third part, we construct from scratch one or two new palindromes.

J.: This is your second version of “Holy Palindrome!” How did the audience react to the first one?

AW: Generally, people are turned on by this — or they are not. But most people who saw the first show were amazed.

J.: How do you come up with palindromes?

AW: I’m always trying to visualize something backward that makes you wonder, makes you think. Some palindromes almost create themselves, and some I work on for hours, or even days. It’s a wonderfully healthy way to pass the time, good for the brain.

J.: Early in your career, you worked in radio and television news in San Jose, and from 1979 through 2005, you served as Bay Area spokesperson for the U.S. Postal Service. What was that like?

AW: I handled external media relations and internal publications. The most interesting thing was overseeing the national introduction ceremony of the new “Love” stamp in 1987 in San Francisco. Tony Bennett arrived at the Fairmont Hotel on a cable car.

J.: Any other memorable moments?

AW: We also had a ceremony when a Hanukkah stamp was issued, and I put together releases when the Bret Harte stamp was issued. In every field of endeavor, I’ve always looked for the nexus between that and Jews.

J.: Back when you were growing up “middle-of-the-road Jewish” in suburban Los Angeles, you liked to solve anagram puzzles in the newspaper and went on to play Scrabble at the tournament level. What else appealed to you?

AW: As a boy, I read the dictionary and the encyclopedia, always looking for in-depth information. I think I was aware of palindromes even then, and what first drew me to them was their rarity. There are only about 100 or 200 decent ones, and finding a great one is a big deal.

J.: Where are they found?

AW: If you look online, you’ll find lots of terrible ones, word play that just doesn’t work. But there are some good magazines, and one man, Jon Agee, has made a living writing books of palindromes.

J.: In addition to your shows, how do you share your admiration for palindromes?

AW: Up until January, I lived in Pacifica, and for a long time I was on a local cable variety show there every Wednesday night as “The Pacifica Prince of Palindromes.” I’d show the anatomy of palindromes and then come up with some.

AW: I’d like to take the show to a Jewish convention at a large hotel or maybe even do a TED Talk. Palindromes are so unique, so educational, so funny and entertaining. I have a theme in mind for another show, too — a Valentine’s Day show about the elements of love. 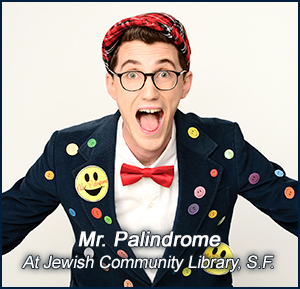