At Karaite Convention, everything is the same — but different

“It’s like Judaism from an alternate universe,” said my friend Taeer. “So much is the same — but different.”

I’ve witnessed a lot of different Judaisms, and I’ve had that feeling in plenty of synagogues — but never more so than in my visits to the Karaite synagogue in Daly City. This small community, the only significant outpost of Karaite Judaism in North America, represents a road not taken by most of our ancestors.

Karaite Jews are the other half of a 10th-century schism, in which their ancestors rejected rabbinic authority, electing to rely solely on the written Torah. (Hence the name, from the Hebrew kara, read, related to the term mikra, scripture. They call the rest of us Rabbanites.) The 800 who live in the Bay Area are part of an ancient community of Karaite Jews who lived in Egypt until the outbreak of the Six-Day War in 1967, when all Jewish men were imprisoned as possible Israeli spies. After their release, the Karaites left Egypt. Most headed to Israel, but some settled in the Bay Area. Many still live here, along with their children and grandchildren.

A year ago, their synagogue reopened after a significant remodeling and expansion, with the promise of a reinvigorated community, a building in which to ensure a Karaite future in America.

That reinvigoration was on display last weekend at the very first Karaite Convention, a gathering of several dozen Karaite Jews — mostly from the Bay Area, but some from as far as Boston, Australia and Israel, where there is a Karaite community of around 30,000. There were Shabbat services, workshops and learning sessions on Karaite music, Karaite kashrut, Karaite texts and more. And food. Goodness me, the food. When old Egyptian ladies are preparing a big communal meal, the wise among us show up.

I arrived late Friday afternoon, just as a group conversion ceremony was wrapping up. By that time, several married couples converting to Karaite Judaism had just been remarried and were signing new marriage documents. “Anyone who wants, go and sign,” announced Shawn Lichaa, a second-generation American Karaite who has become a pillar of and advocate for the community. Karaite marriage documents require signatures of 10 witnesses — a whole minyan!

Before dinner, around 70 people gathered around a long table for some singing, featuring the results of the Karaite Mantra Project. The mantra is a new liturgical composition by two Israeli Karaite hazzans, including Nir Nissim, who was present teaching the song. The singing had a call-and-response, kirtan-like feel.

Services were led by America’s newest Karaite hazzan, James Walker. He has a phenomenal, powerful voice. It was one of the best hazzanut experiences of my life.

Services are conducted in a room that looks like a typical sanctuary — an ark at the front, shelves of prayerbooks at the back, rows of pews, etc. But it’s also different. One must remove shoes before entering, as Moses did when he approached the burning bush. There is lush, comfortable carpeting underfoot. Between the pews and the bimah is an open space where many of the men sit and children squirm.

Most of the service is conducted standing. When they bow, they go all the way down, touching their heads to the floor, including old men clearly struggling to get all the way down and back up.

The liturgy is composed almost entirely of Biblical passages, including long blocks of text cobbled together from many lines and phrases from disparate books of the Bible. It’s heavy on Psalms, of course — the Bible’s own built-in liturgy.

The next morning, I returned in time for the Torah service. This was the most recognizable part of the liturgy and had a familiar structure — the Torah is divided into the same portions, and each one gets several aliyot, as in any Jewish service — but the blessings over the Torah reading are different.

Unlike most Jewish communities today, the person receiving the aliyah actually reads or chants the passage of Torah. Nissim stood by to check that they were reading it just so — often stopping them to interject some explanation of what was being read or to loudly correct a mistake and explain to everyone why that mistake mattered.

All of those involved in leading the service were men. Women are allowed to participate, I was told, but that’s a recent development, so most aren’t knowledgeable enough yet to do it. Sure. There is no mechitza, but there are three sections of pews. This resembles the “trichitza” arrangement seen in communities like San Francisco’s Mission Minyan, but the boundaries were a little more porous. Women sat in the left column. The middle section was mostly men, with a sprinkling of women. Taeer and I sat on the right, filled with men, except for our friend Mariyama who joined us, and one old woman who sat with her husband for a little while. The women in the sanctuary were mostly younger and/or converts. Most of the old women, those who came from Egypt, shmoozed and arranged food in the next room.

I returned in the afternoon for lessons on Karaite hazzanut and kashrut. According to Walker, Karaite musical traditions go way back, perhaps all the way to the Temple in Jerusalem. “Our sages saw this musical tradition as a continuation of the Psalms themselves,” Walker said. Certainly, it is at least 1,000 years old, he said, dating to the beginning of the Karaite synagogue in the Old City of Jerusalem, which may be the oldest synagogue in continuous use in Israel.

Walker is one of a handful of black Americans who have converted to Karaite Judaism. After converting, he took a deep dive into Karaite music and is now considered an expert. He demonstrated the basics of reading trope the Karaite way — their take on the mini-melodies for Torah reading that apply to individual syllables or words. There is an Eastern tone to it that, to my Ashkenazi ear, almost sounds Muslim. Indeed, he said, “If you’ve heard a Muslim call to prayer, some of these same elements are there.”

Next up was Travis Wheeler, also a black convert and America’s only Karaite shochet (kosher butcher). He is a food processing professional by trade, working in sanitation and product development for large meat-processing operations. Wheeler lives in Georgia and speaks with a charming Southern accent.

I’ll spare you the gory details (though he didn’t spare us), but Karaite butchering is somewhat stricter than, say, the OU would have it. At the same time, meat and cheese were served together at lunch earlier in the day — after all, they follow the Bible, which does not explicitly prohibit mixing meat and dairy.

There isn’t enough Karaite meat business for Wheeler to make his full-time living at it. Around Passover, he goes into kosher mode and provides meat for America’s Karaite community. It’s not very profitable, “but I’d rather the community have meat than make money,” he said with a smile.

Then it was time for Havdalah. Like other Karaite traditions, this one had the same purpose — to distinguish between Shabbat and the rest of the week — but used totally different words. Looking around at the 30 hearty souls still around at that hour, Nissim said, “I think this is the biggest Havdalah this synagogue has ever seen.” 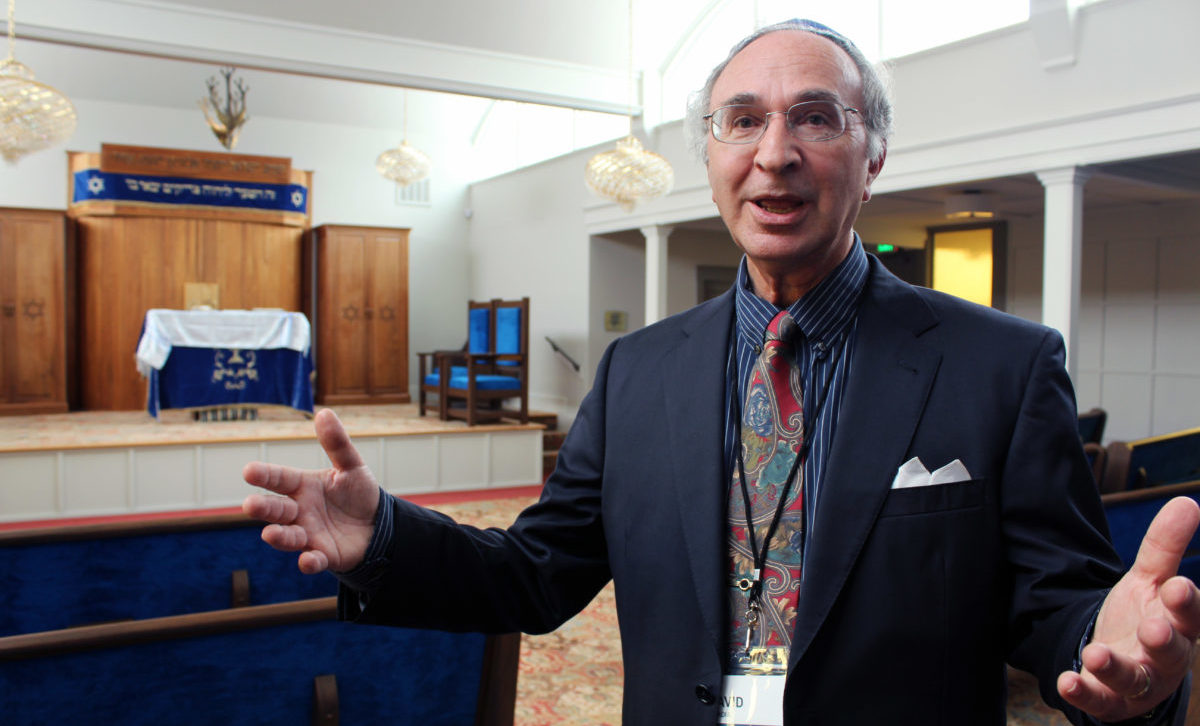