As an Israeli journalist in Germany, I wasn’t surprised by the Halle synagogue shooting

When the breaking news from Halle started to pour in Wednesday afternoon, the Jewish community around the world was still in the midst of commemorating the holiest day of the year in Judaism, Yom Kippur.

Equipped with a rifle, ammunition and other military gear, the 27-year-old gunman tried to break into a synagogue in the eastern German city and shoot as many Jews as he could during prayers. The shooter, a far-rightist, had every intention to commit a memorable massacre with a “worldwide effect,” according to Germany’s chief federal prosecutor.

His attempts failed thanks to the security measures at the entrance and the resourcefulness of the worshippers, helping to prevent a far greater disaster. Two people lost their lives outside the compound, but more than 50 Jewish men and women were inside — dozens of lives were saved.

Prayers and condolences poured in from around the world. The attack sent shockwaves across Germany that reverberated around the globe.

“I am, like millions of people in Germany, shocked and dejected by this crime,” German Chancellor Angela Merkel said at a trade union congress in Nuremberg.

But for us, Jews who live in Germany, “shock” is the last reaction that comes to mind following this heinous attack. In fact, it was just a matter of time until the extreme far-right scene in this country would turn its spotlight back on the true, eternal enemy of both Germany and Western civilization: the Jews.

“Jews are the root of all problems,” the gunman, identified as Stephan Balliet of the German state of Saxony-Anhalt, could be heard saying, among other xenophobic and misogynistic statements, while livestreaming his attack on Amazon’s streaming platform Twitch.

He even had the temerity to deny the Holocaust, reminding us all that prejudice, conspiracy theories and hatred toward Jews never really vanished.

Some in the Jewish community — albeit not many — were foolish enough to think that the far right in Europe was now occupied with the 2015 immigration wave, mainly from Muslim countries. Some even had the audacity to celebrate the extremists’ rise.

In Europe today, many of the attacks against Jews are carried out by Muslims, though there is much debate over the prevalence of such instances. Just a few days ago, a knife-wielding man tried to enter a Berlin synagogue, chanting swears against Israel and shouting “Allahu Akbar” in Arabic — a phrase that means “God is great” and also is often used by Islamists upon committing acts of terror. He was released from custody less than 24 hours after the incident and not charged with any crime, sparking concern among Jewish leaders in the country.

But celebrating the rise of anti-Muslim extremists because of a few attacks perpetrated by radical Islamists is not only abhorrent but also superbly naive — anti-Semitism, xenophobia, Islamophobia and racism more typically go hand in hand.

About 1,800 anti-Semitic crimes were committed in Germany in 2018, a 20 percent increase from the previous year. Violent crimes against Jews specifically rose to 62 from 37 in 2017, according to a report released by Germany’s Interior Ministry earlier this year.

The report showed that anti-foreigner crimes have also increased by nearly 20 percent, to 7,701 incidents in 2018 from 6,434 the previous year.

The increase in hate crimes against Jews and mostly Muslim immigrants is no coincidence. The Halle shooter himself admitted in his 35-minute livestream that he had considered attacking a mosque, but then regretted it, realizing that he had to eliminate the real problem and not just its symptoms, alluding to, who else, the Jews.

The same ideology that leads far-right extremists to believe they should “stop the invasion” of Islam into Germany is the one making them believe in the trite yet dangerous conspiracy theory about a well-coordinated global Jewish cabal.

In fact, a poll published last year by the German newspaper FAZ showed that 55 percent of the far-right party Alternative for Germany believe that “Jews have too much power in this world.”

This is the same party with election campaign billboards that read “New Germans? We make them ourselves!” urging German women not to marry anyone who isn’t German.

It’s clear that the far right doesn’t have Jews in mind when they talk about “real” Germans. In August 2018, for example, neo-Nazis attacked a Jewish restaurant in Chemnitz, hurling stones, using racial slurs and chanting “get out of Germany, Jewish pigs.”

As was proven in Halle, these dark forces are very much alive and kicking.

In a country with nearly 13,000 active violent far-right extremists, who are not only increasingly arming and training themselves for violent attacks, but also managed to infiltrate the police and the army forces, this attempted massacre should hardly come as a surprise.

And anyone who thought Jews were somehow out of the picture when it comes to hate crimes on German soil is now forced to face this harsh reality: The far right never really stopped targeting us. 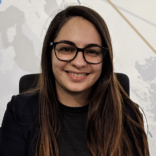