“I think we were targeted for our message,” Pastor Michael Schiefelbein said. “It’s scary.”

The three hate-filled flyers were discovered beginning Friday, Oct. 11, Schiefelbein said, on the door of the sanctuary, then on a nearby traffic sign. On Sunday he discovered one more behind a fence near a preschool building.

The flyers contained the phrase “brought to you by your local Stormer book club,” a reference to local collectives that support a neo-Nazi website edited by alt-right activist Andrew Anglin. Anglin was profiled in a controversial December 2017 cover story in the Atlantic magazine called “The Making of an American Nazi.”

The Daily Stormer website trucks in wild conspiracy theories and attacks against Jews and is, according to the Southern Poverty Law Center, the “most read hate site in the world.” Last month the SPLC reported the site was shut down because Anglin failed to pay web hosting fees. It was subsequently moved to the so-called dark web, which provides access to shadowy internet content not normally reachable on mainstream browsers.

First registered in 2013, the site is named after Der Sturmer, a German newspaper published during the Third Reich by Nazi party member Julius Streicher. Der Sturmer frequently published rabidly anti-Semitic articles and cartoons. After the war, Streicher was convicted of crimes against humanity at the Nuremburg Trials and was executed in 1946.

The flyers posted in Modesto said “more children are molested by rich Jews than are killed by AR-15s,” and “Ban Jews, not guns.” It included photos of Jewish members of Congress, and the late financier and serial sexual abuser Jeffrey Epstein.

Stormer Book Clubs are considered “on the ground” arms of the Daily Stormer website, according to the Anti-Defamation League, which describes them as “small localized crews of young white men who follow and support” the Daily Stormer.

Modesto police are investigating the incident and reviewing security footage, according to Lisa Battista, a church member who reported it to authorities. “The officer I spoke to has been responsive,” Battista said.

This is not the first time the Central Valley city has had to battle right-wing extremism in recent months. In August, failed U.S. Senate candidate Don Grundmann organized a “Straight Pride” march expressing hatred for gays and lesbians, accusing Planned Parenthood of committing “genocide,” and expressing support for “caucasions” (“It’s OK to be white,” Grundmann has said on multiple occasions). The Straight Pride event drew a few dozen protesters, who were significantly outnumbered by pro-LGBTQ and anti-hate counterprotesters. (When interviewed, Grundmann said that since Jews are not white, they don’t fall under his umbrella of support).

In the lead-up to the Straight Pride march, a similar Stormer Book Club flyer was posted at the Central Valley Pride Center, an LGBTQ advocacy space in Modesto. The flyer expressed support for “Straight Pride,” and bore an intricate cartoon drawing that included a caricature of a hook-nosed Jew. It said “Stay safe and stay straight.”

Rabbi Shalom Bochner of Congregation Beth Shalom in Modesto said he was encouraged by the strong anti-hate support in the face of the Straight Pride march, and warned against overreacting to what he considered to be the work of a handful of “creeps.”

An anti-immigrant and “anti-leftist” Stormer Book Club flyer was posted at Beth Shalom a few months ago,but it did not contain any explicitly anti-Jewish content, Bochner said.

“I don’t think it constitutes Modesto as a hostile place, or that Jews are at risk,” he said of the flyer incidents both at his synagogue and at the United Church. “I feel saddened by this. Concerned by this. I don’t feel scared by it.” 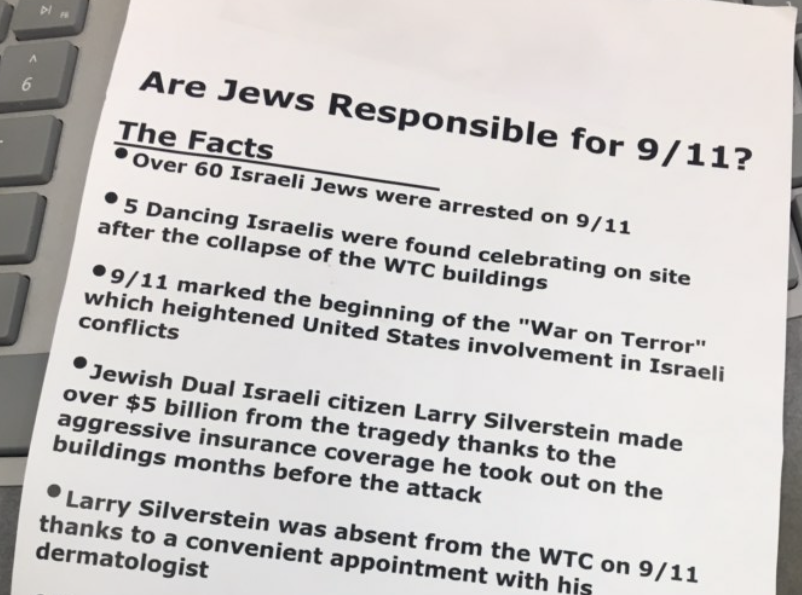