Executive order disorder; and other tidbits from the week’s news

‘Tis the season for so much news!

In addition to another deadly attack on U.S. Jews, a much anticipated British election and the announcement that Israel is going to have a third election in less than a year, President Trump issued an executive order on anti-Semitism.

Let’s break down that last one.

President Donald Trump issued an executive order on Wednesday — in time for his annual Hanukkah parties — directing “robust” enforcement of existing civil rights protections for Jews on campus. Trump cites Title VI of the 1964 Civil Rights Act, which prohibits federal funding for discriminatory programs. He says “students, in particular, continue to face anti-Semitic harassment in schools and on university and college campuses.”

The order represents a significant change in policy, having to do with how one defines anti-Semitism and how anti-Israel activism plays a role.

But that change isn’t what initially dominated the news cycle: The order was leaked Tuesday to The New York Times, which mangled it and said it would define Jews as a nationality. (David Bernstein at Reason rounds up where The Times got its reporting wrong.)

The order does not define Jews in any way. Rather it says that attackers target Jews because they perceive them to be a race or having a shared national identity.

“While Title VI does not cover discrimination based on religion, individuals who face discrimination on the basis of race, color, or national origin do not lose protection under Title VI for also being a member of a group that shares common religious practices,” it says.

Why wouldn’t a religion alone be subject to protections? Because of the thorny establishment clause issues that could come up — a campus that allows proselytizing, for instance, could conceivably be targeted for sanctions.

“On the basis of” does not mean the perception of Jews as a race matches reality. The Obama administration’s Education Department did a better job of making this clear in 2010 when it covered similar territory in a letter to universities.

“While Title VI does not cover discrimination based solely on religion, groups that face discrimination on the basis of actual or perceived shared ancestry or ethnic characteristics may not be denied protection under Title VI on the ground that they also share a common faith,” the letter said.

Still, read closely, it is clear that Trump’s executive order did not advance a new definition of “Jew.”

It’s the social media age when you have to push out your opinion before you get the facts, so there was an explosion of Jewish anxiety on Twitter about what the designation of Jews as a “nationality” would mean.

While the initial reports misread the executive order, it still means a significant change for U.S. policy. Unlike the 2010 Obama administration directive, the Trump order refers to an outside source for its definition of anti-Semitism: The one adopted in 2016 by the International Holocaust Remembrance Alliance.

The IHRA definition includes certain forms of anti-Israel activity as anti-Semitism and also makes clear that criticism of Israel is not in and of itself anti-Semitic. Trump’s order alludes to these, instructing officials to consult the section of the IHRA definition that includes them. “Contemporary Examples of Anti-Semitism,” “to the extent that any examples might be useful as evidence of discriminatory intent.”

So will it change anything? Almost as soon as Trump signed the order, Rep. Denver Riggleman, a Republican from a district in Virginia covering Charlottesville, wrote to Education Secretary Betsy DeVos asking her to review federal funding for Georgetown University’s Center for Contemporary Arab Studies.

Riggleman, who ran a hard-fought race against Leslie Cockburn, whom Republicans had accused of being anti-Semitic for a book she wrote in the 1990s questioning the U.S.-Israel relationship, does not directly cite Trump’s order. But it’s not a letter that would have made sense before the Trump directive. Riggleman refers to Title VI, and nearly all of his complaints in the five-page letter have to do with anti-Israel activity.

“To remedy this unacceptable situation, I urge the Department of Education to undertake a thorough review of CCAS’s activities to determine how Title VI funds are spent on such undertakings, and whether or not they are in accordance with statutory mandates,” he wrote.

Were DeVos to take up Riggleman’s request, the Trump administration would likely face First Amendment challenges: The offenses Riggleman cites, based on research by the conservative Middle East Forum, seem entirely based on Georgetown staffers’ speech outside the confines of the classroom, signing petitions and letters. It’s not clear how that would create a hostile environment inside the classroom. The same goes for the presence on the center’s board of several officials of Persian Gulf states that are close U.S. allies. In one case, Riggleman slams a center official for defending Hanan Ashrawi, a Palestinian Authority official. The Trump administration’s former chief peace negotiator, Jason Greenblatt, has chided Ashrawi for not speaking with U.S. officials, something a Georgetown lawyer would likely raise.

As weak as Riggleman’s letter may be, it underscores how Trump’s executive order may be used going forward and the vexing issues it will inevitably raise. Critics of using the IHRA definition as law (rather than simply as a tool to understand anti-Semitism) cite one of its examples of anti-Semitism involving Israel as too vague to meet any legal standard: “Applying double standards by requiring of it a behavior not expected or demanded of any other democratic nation.”

Season of lights: It’s Hanukkah, which means parties in Washington. Trump held two on Wednesday and included, intuitively, Jewish supporters like Robert Kraft, who owns the New England Patriots, and Austin Polonsky, a charming 12-year-old Trump supporter from San Francisco who sported, to the president’s delight, a red Trump yarmulke. Also present was Alan Dershowitz, the civil rights lawyer and pro-Israel icon who is rumored to be joining Trump’s anti-impeachment team.

Less intuitively, Robert Jeffress, the pastor who once condemned Jews, Mormons and others to hell, was there as well and posing on Twitter with Dershowitz. We’re sure the Harvard law prof and big-time Israel defender was not asking directions.

With @AlanDersh at @WhiteHouse as we prepare to stand next to our great President @realDonaldTrump as he signs historic Executive Order against anti-Semitism. pic.twitter.com/7sgPU64Mj2

Other guests included three Jewish Democrats from districts that traditionally vote Republican, and who posed for a photo op with Trump when he signed the executive order: Elaine Luria of Virginia, Max Rose of New York and Josh Gottheimer of New Jersey.

Dec. 22, the first night of Hanukkah, will also be the 40th year that American Friends of Lubavitch (Chabad) leads the lighting of the “national menorah” on the ellipse.

Rabbi Levi Shemtov, the group’s executive vice president, was not ready to tell me which senior administration official would be joining him in a crane to kindle the first flame. He marveled at how universal the practice is: Menorah lightings once drew the ire of Jewish civil liberties groups. In the 1980s, Bernie Sanders as mayor of Burlington fought the ACLU to keep a menorah near City Hall. (You read that right.) But now they are so commonplace, a nondenominational Havurah on Capitol Hill is also running a public menorah lighting, and in 2012, the Reform movement’s Religious Action Center asked for (and got) tickets to the Chabad menorah lighting for a group of high schoolers in Washington for a conference.

“The Jewish community in the 40 years since the national menorah has been lit has now internalized and practically implemented on a universal basis the concept of pride and celebration of the miracle of Hanukkah,” Shemtov said.

Snowbirds beware: Greg Steube, the Republican who represents Florida’s 17th District (covering Tampa) in Congress, does not like New Yorkers, and suggested his fellow Floridians were also not thrilled with the breed.

At impeachment hearings on Monday, Steube assailed Democrats on the Judiciary Committee for letting Barry Berke, a staff counsel, to lead question of witnesses. He mentioned Berke’s hometown three times in two minutes.

“Mr. Berke is an unelected New York lawyer … Mr. Berke is a white-collar criminal defense lawyer who brags on his website of getting New York financial brokers deferred prosecution for tax fraud … My fellow Americans and Floridians watching this charade, this is who is sitting on top of the dais next to the chairman acting like a member of this committee, a partisan New York lawyer.”

Rep. Ted Deutch, a Jewish Democrat and also a Floridian, asked for a point of order to ask Steube why he thought it was so important that Steube was from New York. Jerry Nadler, the committee chairman, would not allow the point of order.

I asked Deutch if his question had to do with Berke being Jewish. It did.

“Given the spike in anti-Semitism, I wanted to give my colleague the chance to clarify why he chose those words because I know how they can be understood by others,” Deutch told me in an email.

Steube told me that was ridiculous.

“It’s ridiculous to think my comments were anything but aimed at liberal Democrats who will stop at nothing to impeach this President,” he said in an email.

Not helping the optics was the GOP chairwoman, Ronna McDaniel, who posted on Twitter a photo of Speaker Nancy Pelosi and the five chairmen of committees leading the impeachment, deriding them as “3 liberals from California, 3 from New York, and 1 from Massachusetts.” Another way to describe them would be three women, including an African-American, and three Jews.

Guide to the candidates: The Jewish Telegraphic Agency has put together a guide to the 2020 presidential candidates with summaries of their views on Israel and anti-Semitism. We cover Trump and the nine Democrats we think have a shot. (Our luck, President Marianne Williamson will snub us for four years for leaving her out.) Most of the candidates answered our questions directly.

What’s in a name: The dead suspect in a shooting attack on a kosher market in Jersey City was a Black Hebrew Israelite — but that term covers a range of views and beliefs, from black supremacist and anti-Semitic to Judeophilic. Less confusing is the Groypers, a movement that is all-anti-Semitic and hoping to remake conservatism in its image.

Danny Zaken, a journalist at Kan Israel Radio, writes in Al-Monitor about how popular Israeli Mizrahi recording artists are (unwittingly in some cases) becoming a bridge between Israel and its Arab neighbors, thanks in part to Palestinians who spread their music.

THREE HOURS TIL ALL MY NIGHTMARES COME TRUE https://t.co/PT9XwdlIEX

Israel is set to go to its third elections in a year, and Jewish Insider correspondent Amy Spiro’s Halloween nightmare is coming true.

The Tell is a weekly roundup of the latest Jewish political news from Ron Kampeas, the Jewish Telegraphic Agency’s Washington Bureau Chief. Connect with him on Twitter at @kampeas or suggest a story to him by emailing [email protected]. Sign up here to receive The Tell in your inbox on Thursday evenings. 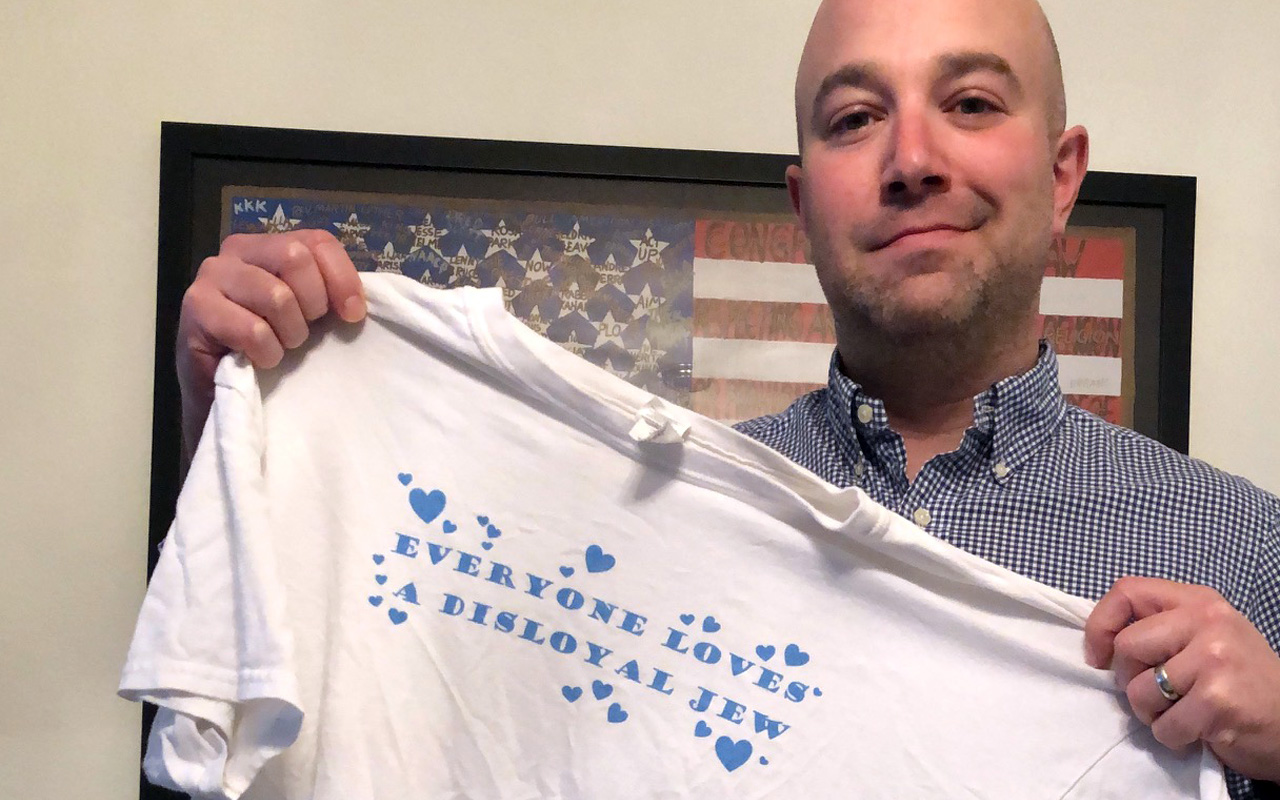 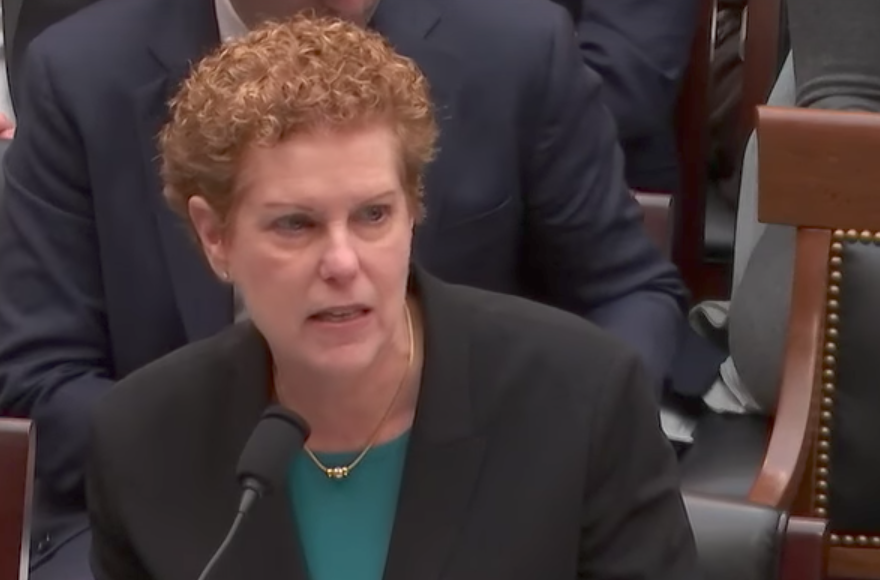 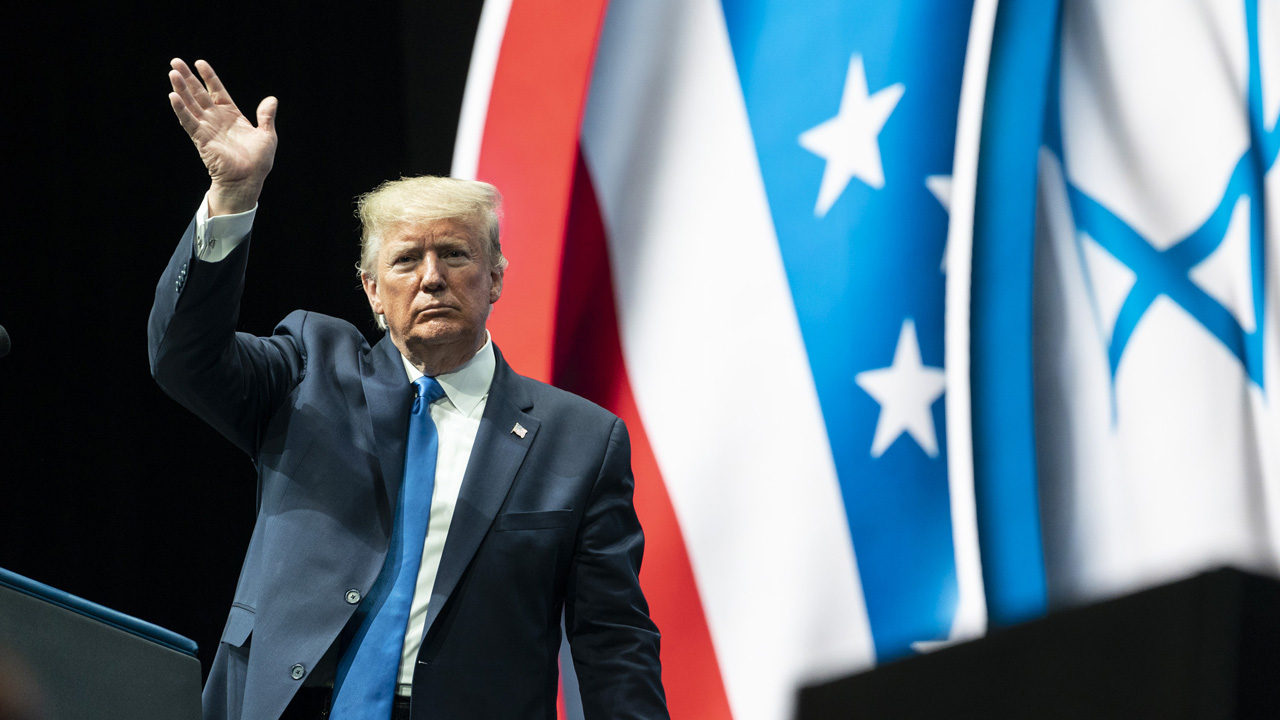 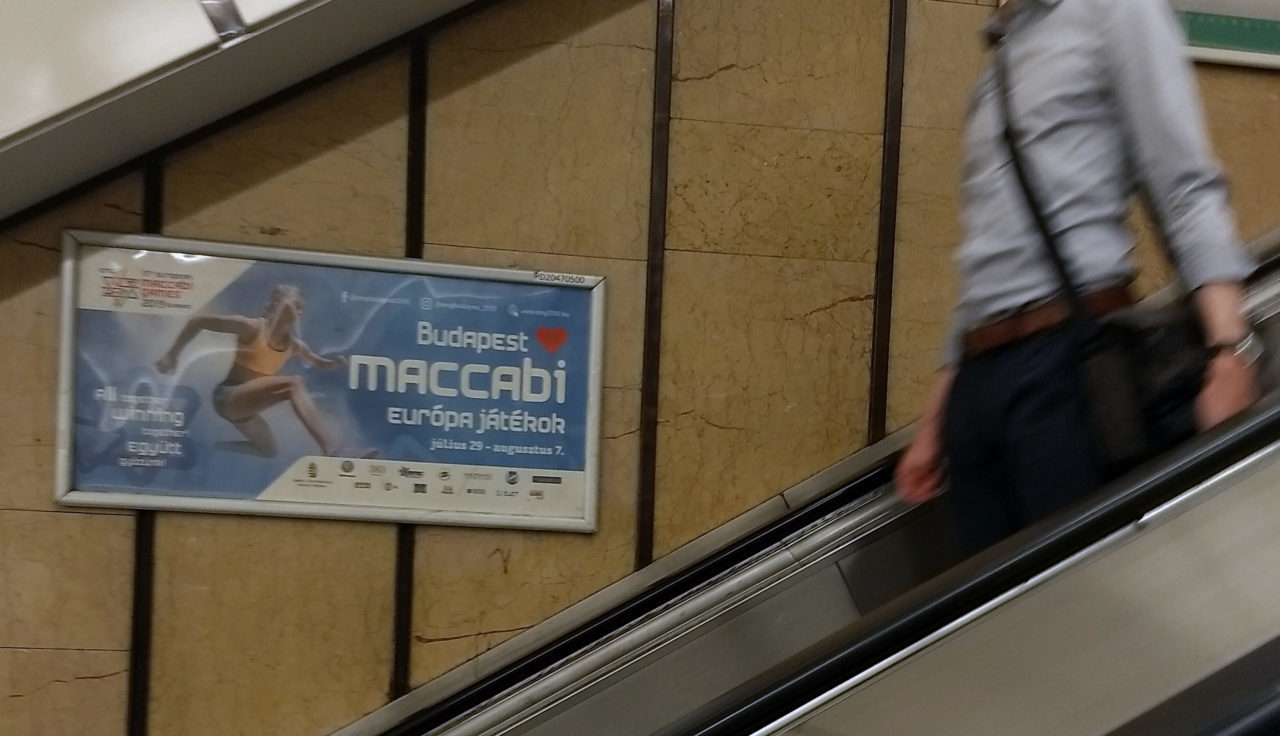