Before the rain there were the fires. During that time, in our synagogues, we read of the story of Noah and a generation of humankind so fallen God declared: “I have decided to put an end to all flesh, for the earth is filled with lawlessness because of them. I am about to destroy them with the earth” (Genesis 6:13).

At the same time, news spread across the headlines: California is burning. The blazes have been too close to home to ignore their message. We not only have climate refugees around the world fleeing flooded fields, farms ravaged by drought and homes lost to sea level rise, we have them knocking on our very own doors.

We’re dumping more climate pollution than the Earth can handle, and we’re seeing the ramifications. As in the Noah story, the consequences of our collective action are coming home to roost.

At least Noah took some action. After learning of the impending destruction, Noah dutifully listens and builds an ark to save his family and a reproductive sampling of each species. Some of us are engaged in building our own arks: We try to protect our cities and communities from rising seas and superstorms, and open our doors to climate refugees.

None of this is theoretical. Around the bay, our cities and towns are funding seawalls to protect us from rising waters; during the Kincade fires, six extra people crammed into my neighbors’ apartment.

In today’s climate terms, our protective responses to climate change are called “adaptation.” We’d be fools if we didn’t adapt. In fact, we could not survive, just as Noah couldn’t survive the flood without the ark.

The message from God in Noah’s time and from the scientists of today is the same: Due to human error, the world as we know it is at risk. But unlike Noah, we have the chance to act, with scientific knowledge, to protect God’s creation.

We mitigate the harm to our world by all the actions we as individuals, communities, businesses and governments take to reduce warming. One could argue that we’re better off than Noah; unlike God who offered the destruction as fait accompli, scientists have laid out a pathway and roadmap for us to maintain a livable planet.

Unlike Noah, we have the chance to act, with scientific knowledge, to protect God’s creation.

Here are a few ways to think globally and act locally:

Opt-up and opt-out. Opt-up with your local energy provider. Around the Bay Area, we have new, local, municipal nonprofit Community Choice Energy providers that are sourcing cleaner electricity. That’s great, but even better is 100 percent renewable electricity. Opt-up on your bill and pay a few dollars more for solar and wind.

Opt-out of a car, at least sometimes. Take the bus, bike, bike, walk a bit more and, if you do drive, try to carpool or go electric.

Congregations, thanks to our collective commitment to tikkun olam (repairing the world), and innovative grantors around the Bay Area, our synagogues are leading the way: Congregations Emanu-El and Sherith Israel in San Francisco are pursuing zero-emissions; Kehilla Community Synagogue in the East Bay is working to install electric-vehicle chargers, and Peninsula Sinai Congregation in Foster City is exploring a solar battery system that will allow for it to keep its lights on, even when the grid shuts down.

Aim high and share what you’ve done with the community!

Last but not least, we can’t forget our relationship to government. In California, we have the opportunity to engage in committing to cutting-edge legislative solutions and ballot measures. So be a faith climate voter, and vote with climate in mind.

Our state reps are doing their job as environmental champions — but some important bills have been dying in the state Senate or Assembly, or even on the governor’s desk. They need to hear from us that they have our support.

Noah was righteous in his generation. He adapted and built his own ark. But he was helpless to prevent the catastrophe.

We are not helpless.

We’re blessed to live in a generation with the likes of champions such as Greta Thunberg, Al Gore, and rabbis and lay leaders calling for action in our own communities. We can adapt and mitigate this climate chaos.

After the flood, we’re given the rainbow as a visual promise that God won’t again destroy life on Earth in that way. Let’s take hold of the promise of that rainbow and declare ourselves as partners in sustaining this Earth. 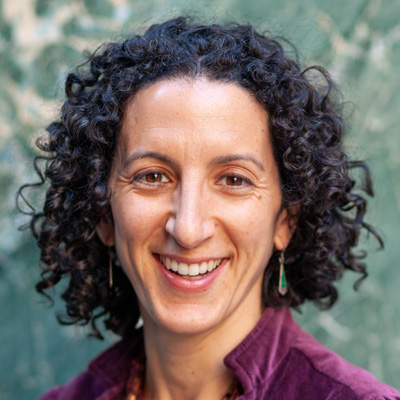 Liore Milgrom-Gartner is the Northern California director of California Interfaith Power & Light, a faith-based response to climate change, and a member of The Kitchen Jewish community in San Francisco.