Where the Democratic candidates stand on Iran; and other tidbits from the week’s political news

The post-debate analysis this week focused largely on the ongoing spat between Bernie Sanders and Elizabeth Warren. While we hope they can sort that out soon, the debate featured something else more relevant to JTA readers: Everyone on stage thought that President Donald Trump made a huge mistake in 2018 when he pulled out of the Iran nuclear deal and said outright or implied that as president, they would return to the deal.

(To be more precise, Warren did not speak up on the topic, but she has expressed similar sentiments elsewhere.)

The situation in Iran has changed drastically since Trump left the deal. So we went searching for the details of what the leading Democrats would do to contain the Iranian threat amid the new tensions brewing between Iran and the U.S.

Spoiler alert: There’s not a lot out there. But in no particular order, here’s what the top seven candidates have to say. (We’re adding Michael Bloomberg because his polling numbers would qualify him for the debates, but his self-funded campaign has him below the outside campaign contribution threshold.)

Sanders would rejoin the nuclear deal as a means of stopping Iran from going, well, nuclear.

“As you know, the nuclear deal with Iran was worked on with a number of our allies,” the Vermont senator said at the debate. “We have got to undo what Trump did, bring that coalition together and make sure that Iran never gets a nuclear weapon.”

His website does not elaborate, but a supporters website, FeelTheBern.org, has compiled his statements and adds some perspective. Sanders slots removing Iran’s nuclear threat into a wider effort to denuclearize the planet. In 2009, Sanders said after Obama first mooted an Iran deal, “We must limit nuclear proliferation, now and in the future. We must end the production of weapons-grade uranium.”

Sanders also sees rejoining the nuclear deal as a means of containing the escalating non-nuclear tensions.

As he said in the debate, Biden believes the Iran deal was doing its job.

“It was working. It was being held tightly,” he said. “There was no movement on the part of the Iranian government to get closer to a nuclear weapon.”

On his campaign’s foreign policy page, Biden does seem to acknowledge some flaws with the package he championed as Obama’s vice president, alluding to the expiration dates on some of its restrictions and its omission of non-nuclear mischief.

“If Tehran returns to compliance with the deal, President Biden would re-enter the agreement, using hard-nosed diplomacy and support from our allies to strengthen and extend it, while more effectively pushing back against Iran’s other destabilizing activities,” his website reads.

Buttigieg in the debate said he would rejoin the Iran deal as a means of keeping Iran from becoming nuclear and, like Sanders, suggested that the agreement would also stem escalating non-nuclear tensions.

“By gutting the Iran nuclear deal — one that, by the way, the Trump administration itself admitted was working, certified that it was preventing progress toward a nuclear Iran — by gutting that, they have made the region more dangerous and set off the chain of events that we are now dealing with as it escalates even closer to the brink of outright war,” he said.

Buttigieg in his signature foreign policy speech in June at the University of Indiana echoed a familiar claim of Iran deal proponents — the deal freed up the United States to confront Iran on its non-nuclear bad acts.

“This agreement was concluded not to do Iran a favor, but because it is in our national security interest — just as a parallel policy of confronting Iran’s support for terrorism and abysmal human rights record reflects our values and security interests,” the former mayor of South Bend, Indiana, said.

Klobuchar during the debate said she would rejoin the deal, but also suggested that she wanted some improvements related to the expiration dates of some enrichment restrictions and on what the nuclear inspectors are allowed to do.

“I think there are changes you can make to the agreement that are sunset, some changes to the inspections, but overall that is what we should do,” she said.

In her signature foreign policy speech last month at the Council on Foreign Relations, Klobuchar outlined a long-term policy that would confront Iran’s bad acts and also specified its threat to “the security of Israel.”

“We need a realistic long term strategy for Iran that will contain its aggressive actions and prevent it from gaining nuclear weapons,” the Minnesota senator said, but did not add details.

During the debate, Steyer cast the Iran nuclear deal as having stemmed Iran’s nuclear ambitions and its adventurism.

“What worked with President Obama was an alliance of our allies and us putting economic pressure on them for them to give up their military tactic,” he said. “That, to me, is called strategy.”

Warren, the Boston Globe has noted, has not been eager to address the Iran crisis on the stump, although she will answer questions when asked.

In a September interview with the Council on Foreign Relations, she said she would re-enter the Iran deal, but also hinted that she was unhappy with its sunset provisions. The Massachusetts senator also called for a robust posture countering Iranian aggression and said leaving the deal made that harder.

“We also need to address serious concerns about Iran’s policies beyond its nuclear program, including its ballistic missile program and support for destabilizing regional proxies,” she said. “The [Iran deal] made addressing these problems easier by taking the threat of a nuclear-armed Iran off the table.”

In 2015, Bloomberg said he had “deep reservations” about the Iran deal, especially with its sunset provisions, and in an op-ed on Bloomberg News he accused President Obama of playing politics and “smearing critics.”

More recently, unburdened by tough questions during debates, he has not weighed in on whether he would return to the deal. However, he told The Washington Post last week that he would keep an open line with Iran and install a version of the red phone that Cold War presidents used to keep at bay crises with the Soviet Union.

Impeachment trial: House Speaker Nancy Pelosi on Wednesday named seven managers for the Senate trial of President Trump on the House’s charge of impeachment for pressuring Ukraine’s government to launch an investigation into Biden. Her lead manager is Rep. Adam Schiff of California, who chairs the House Intelligence Committee, and also taking a lead is Rep. Jerry Nadler, the chairman of the Judiciary Committee. Nadler and Schiff are Jewish.

At the news conference Pelosi said that “time has been our friend” — a rebuke to those who criticized her for delaying the formal relaying of the charges of impeachment to the Senate. Certainly a flood of interviews this week with Lev Parnas, the indicted Ukrainian-American businessman involved in pressuring Ukraine, seemed timed for maximum damage to Trump’s case. Parnas in those interviews said that Trump’s sole consideration in pressuring Ukraine was to harm Biden.

A tale of two hearings: Rep. Max Rose, D-N.Y., the Jewish chairman of the House Intelligence and counterterrorism subcommittee of the Homeland Security Committee, convened a hearing Wednesday to address the rise in domestic anti-Semitic terrorism.

Watching the hearing was like seeing two movies simultaneously, one about the recent physical threats to Jews, and another about the nuances of how to confront Israel boycott movements.

Two witnesses, Jonathan Greenblatt, the Anti-Defamation League CEO, and Nathan Diament, the Orthodox Union director, came prepared with the recommendations that Rose sought in his opening statement, in which he asked how to prevent the attacks that have traumatized communities recently. Rose cited the lethal shooting in Jersey City and the stabbing in Monsey late last year, as well as harassment on the streets of his native New York City.

Greenblatt urged lawmakers to pass a number of legislative initiatives, including training and equipping police to identify and deal with hate crimes and domestic terrorism; extending existing restrictions on incitement from broadcast media to online media; adding funding to nonprofit security; and promoting Holocaust education.

Diament described, vividly, the specific threat that “visibly” Orthodox Jews face and also urged increased security funding for nonprofits. He said a program that Jewish institutions have long used should be ready to accommodate requests from Muslim and Christian institutions, among others.

Another two witnesses called by the committee’s Republican minority seemed to come prepared for a Foreign Affairs Committee hearing.

Clifford May, president of the Foundation for the Defense of Democracy, focused mostly on foreign threats at a hearing geared to domestic threats, listing anti-Jewish rhetoric and actions in France, Germany and Malaysia, and also arguing that the Boycott, Divestment and Sanctions against Israel is an expression of anti-Semitism. Eugene Kontorovich, a professor at George Mason University’s Scalia Law School, testified virtually only about BDS, arguing that it was “inherently anti-Semitic” and adding that “discriminatory boycotts do not in themselves call for violence.”

You talking to meatball? How concerned is Bloomberg that he’s missing the debates? Not so concerned, considering the photo mashup of his face and a meatball that his campaign posted during the debate on Tuesday.

Test your political knowledge:
SPOT THE MEATBALL THAT LOOKS LIKE MIKE. pic.twitter.com/CkzdgwpzdI

Obama’s Middle East team is back, and advising Elizabeth Warren on foreign policy.

Tom Steyer is the waiter walking over with mozzarella sticks 30 seconds after the couple starts the breakup convo. https://t.co/SY5QN4CCeC

The tense post-debate moment between Sanders and Warren arguing over who accused whom of lying featured a cameo by Steyer, who just wanted to be friends. Ben Collins, an NBC reporter, captures precisely the role the billionaire stumbled into. 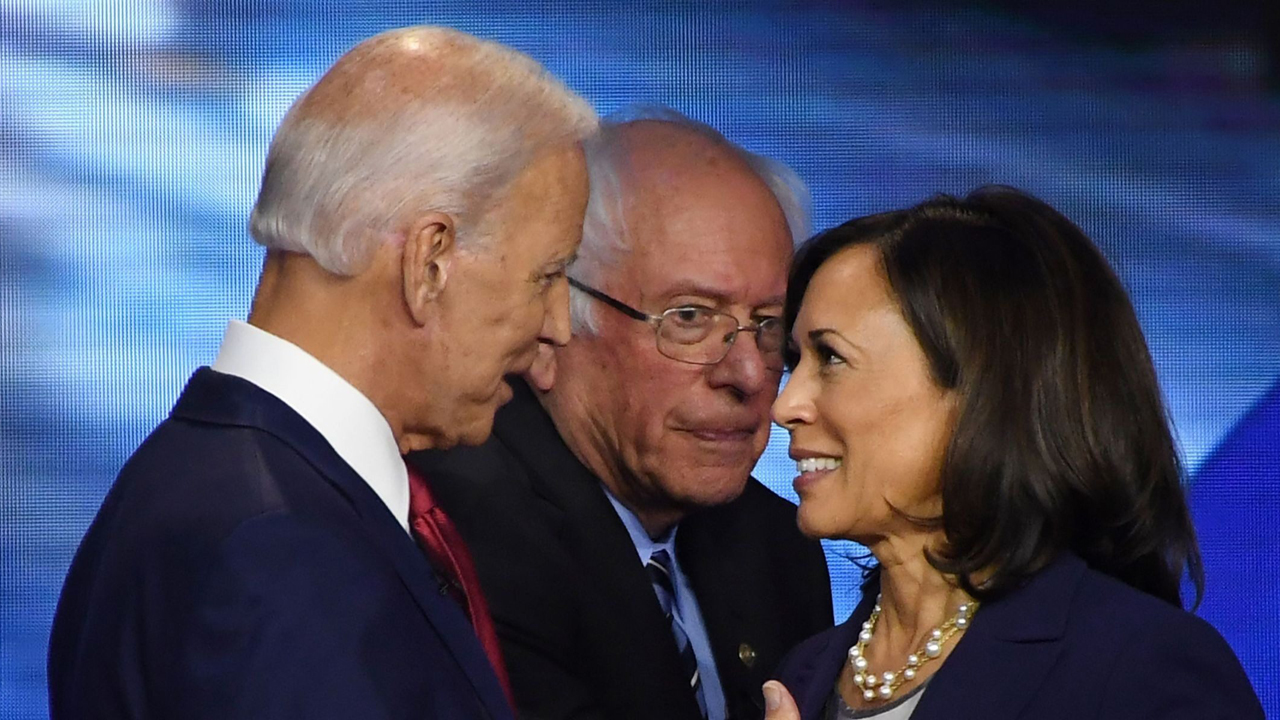 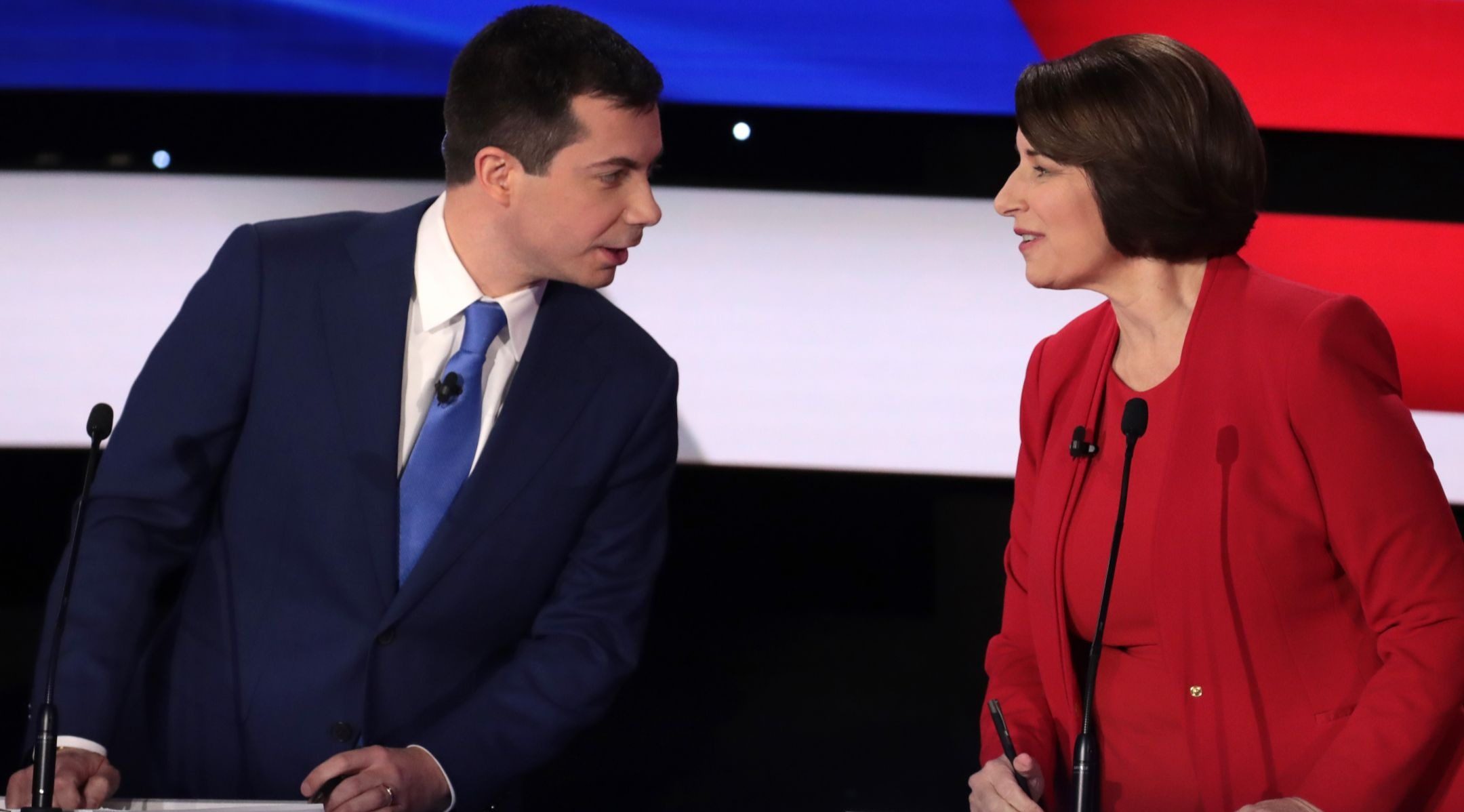 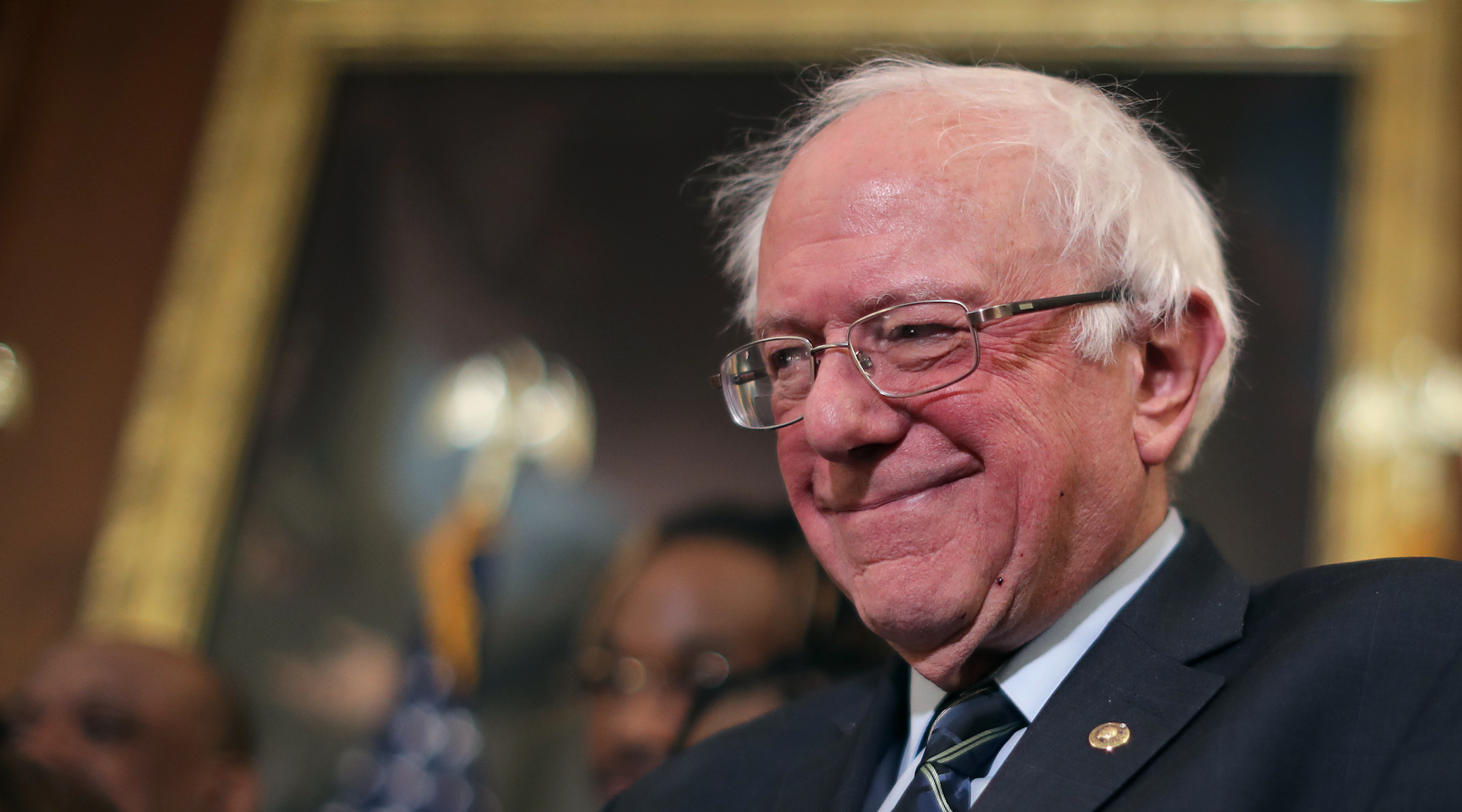 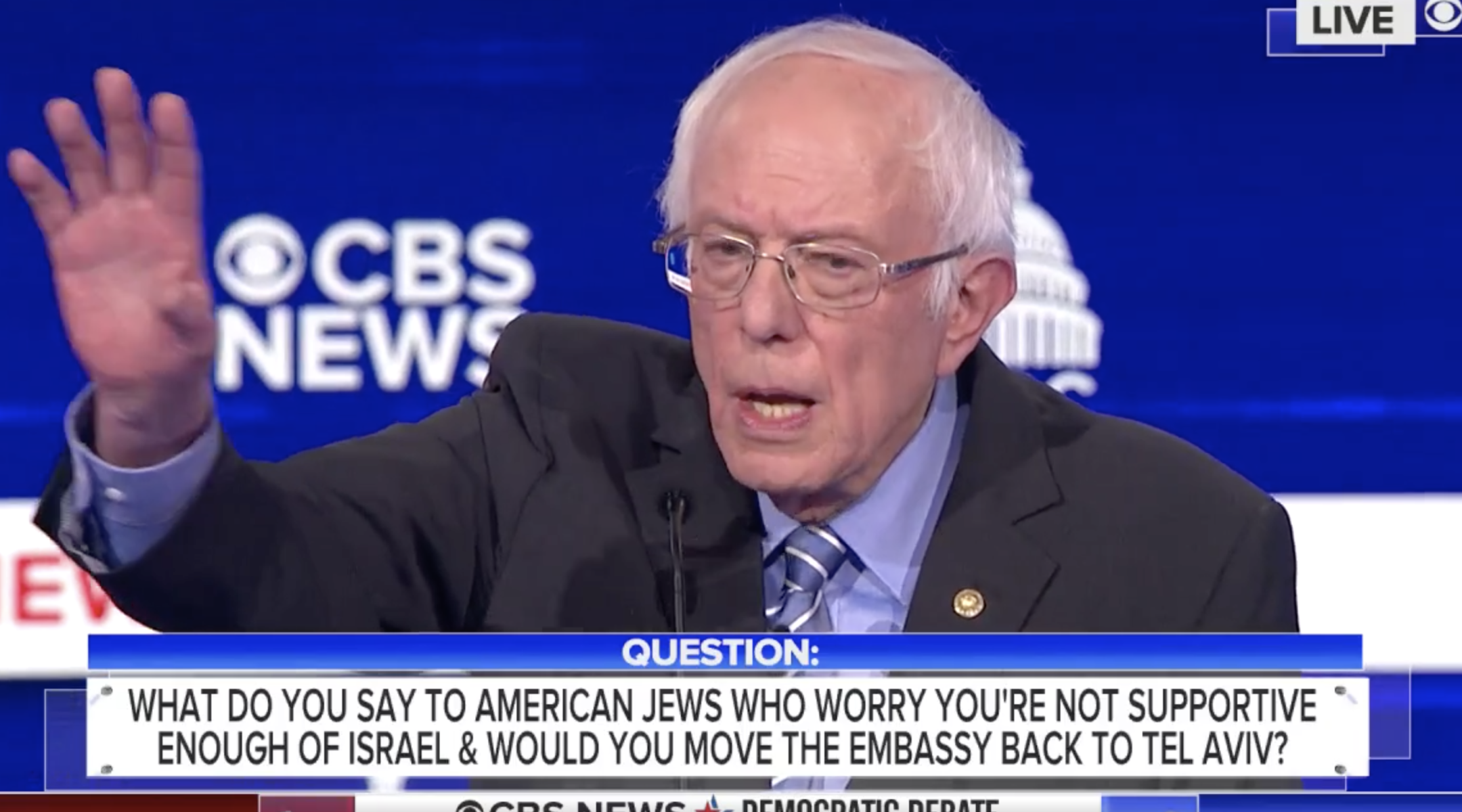