‘The Plot Against America’ is a jagged pill in overwhelming times

It’s the eve of an election cycle. The nation is split. While Jews live a fairly comfortable existence, there’s an active undercurrent of simmering anti-Semitism and racism.

This could be our world of just a few weeks ago.

But it’s also the world of “The Plot Against America,” a six-episode series HBO based on Philip Roth’s 2004 book of the same name and created by David Simon (‘The Wire”).

The show started March 16 and airs Mondays at 9 p.m. on HBO, with frequent replays on HBO2 and HBO Latino, and also on-demand at HBO.com for subscribers.

Additionally, there’s an HBO-produced podcast that accompanies the series, starring Simon and hosted by Peter Sagal of NPR’s “Wait, Wait … Don’t Tell Me.”

The series begins in June of 1940, before America’s official involvement in World War II, dropping viewers into the Newark, New Jersey, home of Herman Levin (Morgan Spector) and his family: wife Bess and sons Sandy and Philip (a stand-in for the novel’s author).

In this fictional world, Franklin D. Roosevelt is the president, but a growing noninterventionist group is putting “America First.” At its head is the celebrity pilot Charles Lindbergh, who is running against FDR and sowing the seeds of suspicion that Jews have dual loyalty.

During the campaign, Herman says “America First” supporters have “always been here, but now it’s like they have permission.”

As with other media in the alternate-history genre — notably “The Man in the High Castle” and, to an extent, the more surreal “Hunters” — the presence of these characters can send viewers scurrying to Google to find out if a character really said or believed in real life what they do in the show, or to fill in other historical gaps in their knowledge.

The real Lindbergh, like this fictionalized version, completed the first solo transatlantic flight in 1921, and fingered FDR, the British and the Jews as the three main groups urging U.S. involvement in the war in Europe. Also appearing in the series are radio personality Walter Winchell (the son of Russian Jewish immigrants, he was the first syndicated gossip columnist) and Montana Democratic Sen. Burton K. Wheeler (Lindbergh’s vice president in the book and series).

With Levin at the story’s center, narrative tributaries extend in different directions.

A nephew and uncle fundamentally disagree about how to respond to the rising threat. The children struggle with their parents’ opinions about their hero, Lindbergh, and cope with the changing and uncertain world around them.

Bengelsdorf might seem to have the best of intentions, assuring Lindbergh that “Jews are committed to the U.S. and hold no allegiances to other countries, where they were never welcome.” But others, including Philip’s parents, say Bengelsdorf is a sellout, and one character says Lindbergh “slipped a gold ring into [the rabbi’s] big Jew nose and now they can lead him anywhere.”

While the Levin family is not religious, they are culturally connected to Judaism.

While Bess ensures Shabbat dinner is on the table and that the family celebrates together — with blessings over wine and challah — her sister Evelyn initially feels unworthy to date a rabbi because she “doesn’t know the Talmud from the mishnah.” (He gives her a copy of Maimonides’ “Guide for the Perplexed,” as if that will solve the problem.) But when a politician hurls anti-Semitic and racist sentiment her way, Evelyn throws back a Yiddish curse (“gey kakken affen yam”), even though she doesn’t know what it means. (It means “go s*** in the ocean.”)

There’s a lot in this series that echoes today’s news broadcasts — at least, before coronavirus hit.

While some of these elements appear in Roth’s original, the show’s creators may have intentionally woven in some contemporary details, causing unnerving tingles of recognition for today’s audiences.

Complaints about police who are present but don’t stop the violence. The election’s scare tactics, protests and rallies. And the messaging of “every vote counts” even as it becomes clear that some votes won’t count. There’s also a rising anti-Semitism and the xenophobic “America First” rhetoric that permeates the Lindbergh campaign and the idea of dual loyalty.

This week, ABC News reported that, according to FBI intelligence in the New York office, neo-Nazis and other white supremacist groups, are encouraging their members who are COVID-19 positive to spread it to police and to Jews.

When we emerge from the pandemic and step back into the flow of whatever daily life will be, will anti-Semitism have subsided? Or will people be doubling down on xenophobia?

In “The Plot Against America,” the Levin family and neighbors gather on the lawn to talk politics: Has Roosevelt done enough to bring America out of the Depression? Is involvement in a war half a world away the best thing for the U.S.? Does being a celebrity qualify Lindbergh to be commander-in-chief?

Likewise, as we remain “safe at home” or in quarantine, we stew in our beliefs about how we got here and who is to blame, knowing instinctively that the world we emerge into will be socially and economically different from the one before.

And we huddle around the warm glow of our televisions hoping to find spellbinding stories that transport us into a different world.

While “The Plot Against America” expertly transports us back in time to an America we are glad never came to be, it provides no escape from today’s worries about coronavirus and what comes after. 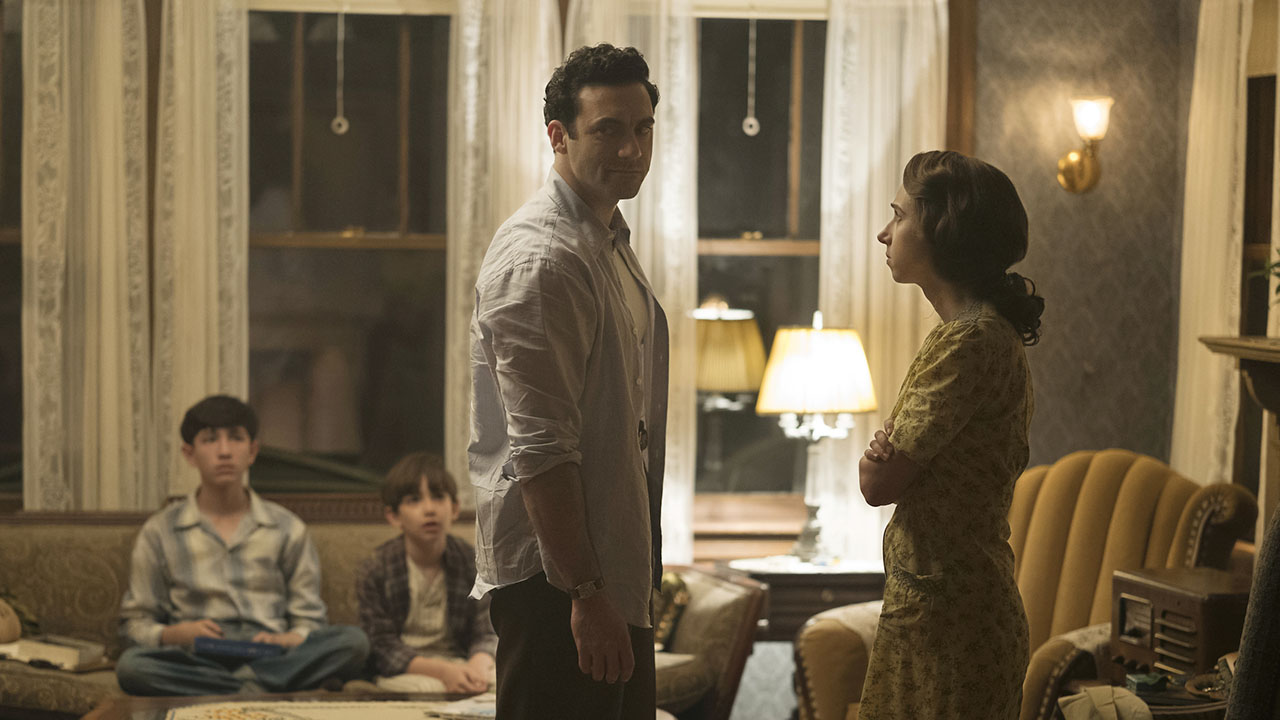