Most Jews don’t know much about Tisha B’Av. That gives us educators a huge opportunity.

As a child, I always looked forward to Tisha B’Av, as weird as that may sound.

It was the one night a year that we were allowed to put the sofa cushions on the floor, and after three weeks with no television, we were finally allowed to watch programs about the meaning of the day. We didn’t mind the boring talking heads — it was a screen! The highlight was eating hard-boiled eggs dipped in ash; it wasn’t tasty, but we loved it. After three summer weeks with nothing fun to do, even a weird tasting egg was exciting.

On Tisha B’Av, which this year falls begins on Wednesday evening, Jews around the world mourn the destruction of both Temples in Jerusalem and the pain and suffering that the Jewish people have experienced for generations. Jewish law demands that during the three weeks preceding the day, Jews limit rejoicing: no weddings, no haircuts, no listening to music and swimming is prohibited. In the last nine days of the three weeks, one isn’t allowed to eat meat or drink wine except on Shabbat, or even wash clothes.

Alongside the traumatic destruction of the first and second Temples, the sin of the spies, the expulsion of the Spanish Jews and even the start of the Holocaust are said to have occurred on Tisha B’Av. The rabbis were ingenious in condensing many tragedies from Jewish history into one day. Sadly, if the Jews dedicated a unique day for every pogrom or expulsion, we would fast all year round.

I grew up in Bnei Brak, a predominantly haredi Orthodox community in Israel. Jewish law was the solid foundation of my day-to-day life and its rules defined my identity. The Jewish calendar and the guidelines for each holiday stood at the core of my existence.

While my childhood memories of Tisha B’Av were central to my upbringing, most Jews don’t get a chance to experience the saddest day of the Jewish calendar. Since Israeli public schools and Jewish day schools are the primary avenue for introducing holidays to children, those that fall during the summer months tend to be neglected.

But rather than focusing on what children have missed because of this reality, I want to suggest that we Jewish educators seize the opportunity to reimagine how we teach Tisha B’Av.

With most students, we are essentially starting fresh: We don’t have any negative associations or oversimplifications of the holiday to overcome, and students are not fighting to reevaluate their childhood conceptions of the day. The holiday was never improperly infantilized by kindergarten teachers; no ceremony was organized in which kids stood on a stage and recited words they didn’t understand.

We have an opportunity to redefine the essence of the day and create a meaningful experience for adults and kids. The day involves some tried-and-true rituals — fasting and reciting Lamentations — but what more can be included?

One of the most life-changing Tisha B’Av experiences I ever had was at BINA, a secular yeshiva (the first of its kind!) in South Tel Aviv. As part of the educational team, I sat with students and staff in the beit midrash and learned the Talmudic passages about the rabbis trying to make sense of the tragedy of Jerusalem’s destruction. While in the classroom, we looked through the windows out into the surrounding neighborhood. We could see the sorrow of the world around us. After we finished studying, we went out to volunteer in the community, helping in any way we could.

Tisha B’Av is especially relevant this year. The global pandemic that we’re experiencing is damaging so much of what has been built through years of love and care. We have been reminded of how little control we have and that racial justice, both in Israel and America, is still far from perfect.

This year, we can make Tisha B’Av a dedicated space in time to mourn the brokenness in our hearts and in our world. It can be a day for sharing our pain with others and for reenergizing ourselves to do more to make our world a better place. A day to meditate on how light creeps through the cracks and to think about rebuilding and healing.

When creativity and responsibility go hand in hand and are applied to a beloved tradition, important new opportunities emerge, even on Tisha B’Av. 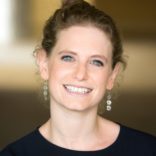 Tova Birnbaum is the Director of Jewish Content at the Oshman Family JCC in Palo Alto.