Let RBG’s memory be a blessing — and an inspiration

I learned of the passing of Justice Ruth Bader Ginsburg (z”l) as I was preparing my home for Rosh Hashanah. Like so many others, I called my mom and cried. I held my fiancé and cried. I cuddled my cat, Lazarus (named after another Jewish American hero), and cried. Then I wiped my tears and got to work kneading challah dough by hand. The dough’s impressive rise, pillowy texture and, ultimately, its festive, round shape gave me an opportunity to process Justice Ginsburg’s passing in the context of the Jewish New Year.

Jews around the world associate Rosh Hashanah with fullness and sweetness. Rosh Hashanah tables feature pomegranates, whole fish, dates, apples with honey, and, of course, round challah. We anticipate a better future, and commit to being better in that future. We pray that the year ahead brings fullness, flavor and meaning.

The connection between the holiday and Justice Ginsburg’s legacy could not have been clearer.

Less than a year ago, my law school classmates and I had the immense privilege of seeing Justice Ginsburg in conversation with Berkeley Law professor Amanda Tyler. Justice Ginsburg reflected on her extraordinary life, with all of its fullness, flavor and meaning. She described her time in law school as full of challenges: taking care of her ailing husband, raising her first child, and fighting sexism and antisemitism in order to secure post-grad employment.

Let her legacy empower us to seek challenges, to grow continuously and to do more for our loved ones.

Justice Ginsburg’s wit and humor exemplify the flavor Jews strive for at this time of year. In the same fall 2019 conversation, Professor Tyler asked Justice Ginsburg what had inspired her famous exercise regime. RBG explained that, soon after her 1993 appointment to the Supreme Court, her husband, Marty, had commented on her appearance. Marty told her, “Ruth, you look like a Holocaust survivor.” That’s why, she told a rapt law school audience, she started lifting weights.

American Jews will recognize in that anecdote both RBG’s caustic sense of humor and her fundamental zest for life. Like so many living in the shadow of the Shoah, Ruth Bader Ginsburg had an intense appreciation for life’s pleasures. She loved dramatic operas and enjoyed them with her dramatic friend, the late Justice Antonin Scalia. To her UC Berkeley appearance, she carried a tote bag with her own silhouette and the words “I dissent.”

Let RBG’s legacy remind us to actively seek out joy, laughter and relationships.

Let’s not forget to honor her most prominent legacy: creating meaningful change. Each Rosh Hashanah offers a chance to recommit to two Jewish values that Justice Ginsburg embodied: tikkun olam and tzedakah.

Tikkun olam refers to the collective Jewish project of fixing a broken world. Ruth Bader Ginsburg fought to fix broken social and political systems her entire life. In honor of the new year and in honor of RBG, I am renewing my commitment to repairing and, in some cases, fundamentally restructuring unjust systems.

Tzedakah is not charity. Charity makes the giver feel good or earns them a religious equivalent of a gold-star sticker. Tzedakah is a commandment. A good Jewish life requires tzedakah. I see Ruth Bader Ginsburg’s devotion of her incredible intellect and talent to public service as a form of tzedakah. She gave her time, her thoughts and her work to the common good. This reminds us that there are many ways of giving.

Over the summer, many American Jews prayed with our feet at Black Lives Matter protests. Others have organized mutual-aid efforts during Covid-19. Since Friday, many have donated to political candidates who will work to help those in need. I believe that all of these actions constitute tzedakah and honor Ruth Bader Ginsburg’s honor. It’s fitting that they should do both, considering the Hebrew root of the word tzedakah.

Tzedakah comes from tzedek, meaning justice or righteousness. Another related word, tzadik, refers to a person of great righteousness. One Jewish tradition says that a person who dies on Rosh Hashanah is a tzadik.

Of course, Ruth Bader Ginsburg was a tzadik long before Friday, and would have been heralded as such no matter the day of her yahrzeit. Jews mourn with the phrase “let her memory be a blessing.” Over the Rosh Hashanah weekend, many urged RBG’s memory to be “a revolution.” I hope it can be an inspiration, as well. Let her memory be a revolutionary, blessed inspiration. Amen. 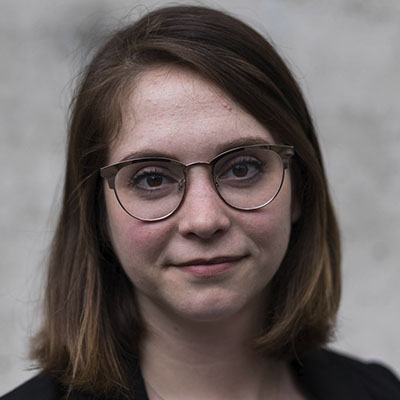 Hannah Lukanuski is a Berkeley native and a third-year student at UC Berkeley School of Law. She is the former co-president and current vice president of religious affairs for the Jewish Students Association at Berkeley Law. Hannah lives in Los Angeles.