Jews around the world are rightfully celebrating the historic and euphoric peace agreement between Israel and the UAE — and so are the Emiratis.

In particular, Israelis are looking forward to visiting the United Arab Emirates once travel is again possible. As a Jew with close ties to the UAE, I have insights about what they’ll experience — a place they’ll surely find both familiar and challenging.

Over the past two years, my husband, children and I have visited the UAE four times, most recently spending Rosh Hashanah and Sukkot in Abu Dhabi. I am intrigued by some striking parallels to Israel, such as taking great pride in “making the desert bloom,” building a hub for global tourism, achieving remarkable advancements in technology and maintaining the identity of a small nation with a huge impact.

My husband Yehuda, now the Chief Rabbi of the UAE, has visited more than 20 times during the past decade as the University Chaplain at NYU, working closely with NYU’s campus in Abu Dhabi, UAE representatives in the US, and the developing Jewish community of the Emirates.

It is perhaps understandable — although not pardonable — that after decades of terrorism, tension and conflict with Islamic countries in the region, many Jews in Israel and Diaspora communities speak in generalizations and express fear and resentment toward our Muslim cousins. But after developing close personal relationships, my children have a hard time understanding that perspective. It has been heartwarming to observe how eager Jewish people worldwide are to embrace their Arab Muslim Emirati friends.

During our recent visits, we sensed the excitement on both sides regarding the historic precedent of a warm peace agreement between an Arab Muslim country in the Middle East and our beloved Jewish homeland. We are all aware of the great potential for building authentic and personal relationships between individuals of our two faiths — a bridge that is desperately needed.

The Islamic faith is interlaced throughout the culture of the UAE: The airports have ablution rooms for prayer preparation, the amusement parks interrupt their stream of music with calls for prayer and hotel rooms provide Qurans and prayer mats. I’m constantly awed by the way secular and religious practices support each other, something that I strive for in my own life but sometimes find is hard in a society that isn’t necessarily oriented that way.

On our trips, we were often observed by local people with guarded curiosity. During our visits, We have felt the looks of others who likely have never seen an Orthodox Jew in person before. During one trip to the Dubai Mall, a security guard began following us, apparently because he was intrigued by our presence. But I’ve never felt like my family couldn’t practice our religion freely. My sons donned kippot and tzitzit and my children openly prayed in public spaces when necessary. They prayed in the airport and carried seven lulavim and etrogim on our recent journey. As an Orthodox woman, I felt as comfortable covering my hair and wearing modest clothing as my Jewish friends in jean shorts and short sleeves did. The women pictured on billboards and depicted in museum exhibits reflect the full range of garb, from hijab and burqa to more secular and westernized wardrobes.

To be sure, the UAE has struggled with the challenges of developing fair labor practices, counteracting the sex tourism industry and extending thorough religious inclusion to all. Yet it is progressively moving in the right direction. The UAE has also published new textbooks acknowledging the state of Israel and praising the peace agreement, distributing them widely two weeks after the signing of the peace agreement.

This rapid and genuine shift invites us to consider how Jews can fully embrace this historic moment to ensure that non-Jewish visitors in our own spaces, from Israel to our Diaspora communities around the world, are treated with the utmost respect, tolerance and dignity. Israel indeed suffers from significant, existential and real threats and losses because of many Islamic countries in the region. But we must remember that Jewish and Muslim people have coexisted peacefully and productively in that region for centuries before.

On a recent summer trip to Israel, we encountered an Islamic tour group of young professionals from London in Ben Gurion Airport. This group was detained for hours in Israel for unexplained security checks. Our close friend, who works as a chaplain at NYU with my husband and served as the Islamic chaplain of the NYPD, was also detained for hours during his first visit to Israel. How is Israel preparing for its new visitors from the UAE, who may be wearing traditional Islamic garb?

Checkpoints, intelligence and scrupulous security are integral to Israel’s safety and existence. But can we work to simultaneously protect Israel’s borders and people while working to welcome people of all faiths with dignity and respect?

Approximately 12-20% of all people who live in the UAE are native Emirati citizens. The majority of the country is comprised of immigrants from all over the Middle East, South Asia and North Africa, including India, Pakistan, Syria, Saudi Arabia, Egypt, Jordan, Iran and Iraq. I am told that the majority of teachers of the Arabic language in elementary schools are Palestinian.

I have heard that among the UAE’s non-citizens — even those from Western countries — there is still some antisemitism, albeit under the radar. It is for this reason that some in the Jewish community still choose to use a discreet tone when talking about their religious affiliations. I frequently remind my children of the responsibility and privilege we have to represent the Jewish people by engaging with our surrounding spaces and the people we encounter with respect and dignity.

During the UAE Jewish community’s celebration of a euphoric tashlich during Rosh Hashanah this year, many in the community wore kippot in public for the first time. As the Jewish residents feel increasingly more comfortable “coming out” with their religious identity in the UAE, this may be the first time that people from the region are meeting Jewish people as equals. We have the chance to shift assumptions and expectations through individual friendships, partnerships and initiatives. How many of us — especially those who identify as religiously observant — have close friends of other faiths?

Our close friend Elli Kriel began the UAE’s first kosher catering company. Through her kosher blog, she has met several Emirati friends, who have since spent Shabbat meals with her family, and Rosh Hashanah, Yom Kippur and Sukkot with our community. Two of them have been studying Hebrew for a year — way before any whisper of the peace agreement.

An Emirati citizen named May, a self described “foodie,” knows more about Jewish and Israeli culture (she’s watched “Shtisel” religiously), music (she’s a big Omer Adam fan) and the food scene (she’s invited the owner of Philadelphia’s Zahav restaurant, Michael Solomonov, to open a branch in Dubai) than most Jews throughout the world.

She shared with me that her parents — traditional and religious Emiratis who were born in Abu Dhabi and speak Arabic fluently — raised her to experience and enjoy different cultures, places, people and experiences, including Israel and the Jewish people.

Shortly after the peace agreement, she read a beautiful welcome letter on Abu Dhabi TV to her new Israeli partners — in complex Hebrew. In fact, she and some of her friends were actually surprised to find out that Israel and the UAE hadn’t been enjoying peaceful relations beforehand.

The billionaire owner of the magnificent Habtoor Palace hotel, which hosted the first ever open community Sukkot program, personally visited our community on Simchat Torah to welcome the community and embrace us warmly.

How can we balance our realistic fear of the Muslims who seek to destroy our people and homeland with openness toward those who are approaching us in peace — especially when it is not always easy to distinguish between the two? How can we in turn encourage our children to display genuine curiosity, generosity of spirit and openness to others, even those whom we’ve been taught to eye with suspicion? How can we feel confident that openness to others will not sacrifice our children’s deep immersion in Jewish life and halachic practice? How can we be honest about the recent historical tension and conflict while embracing the emerging opportunities for peaceful alliances?

The leaders of the UAE are bold and brave for extending genuine and thorough peace to Israel. At an inspiring and emotional inaugural convening of Emirati and Israeli women organized by Jerusalem’s Deputy Mayor, Fleur Hassan-Nahoum, the Emirati and Israeli women repeated the paradigm of being “reunited with family.” We were all eager to learn from each other and to grow together.

At the end of a long meal, they eagerly offered us rides in their cars and invited us to their homes for meals and to family celebrations. There were really no words to describe the natural kinship, connection and genuine respect we felt towards each other.

When we introduced ourselves, I discussed my own family’s close relationship with the imam at NYU (who lives a floor above us) and his family. It was humbling to realize how rare those relationships are.

Our children compare “fasting” accomplishments and discuss their shared biblical narratives, such as the story of Jonah, with their Muslim “cousins,” who call my husband “Abba.”

Two of my teenage children are learning Arabic in a Modern Orthodox high school, and it has been heartwarming to observe how eager Jewish people worldwide are to embrace their Arab Muslim Emirati friends.

The only way to reclaim our relationship with our relatives is through destroying discrimination and following the lead of our Emirati partners. Are we prepared to shift this narrative in our hearts, homes, synagogues and schools?

The leadership and the citizens of the UAE and Israel are embracing each other with excitement, optimism and open hearts and minds. While there is much to gain from a peaceful relationship with Israel, Emiratis have also risked their own alliances in the region by staunchly and thoroughly supporting a collaborative peace agreement.

We must respond not only by respecting their customs, spaces and sensitivities as visitors and residents. It is our opportunity to show — with passion and conviction — that the Jewish people throughout the world are invested in peace, friendship and mutual growth when we are offered the opportunity. 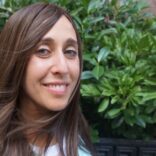 Michelle Waldman Sarna, PhD, is a school and camp psychologist who also works in private practice. She is the co-founder and co-director of the Orthodox Leadership Project. She lectures and writes in topics related to psychology, spirituality, development and family life. She lives in downtown Manhattan with her husband and six children. Michelle welcomes insights and questions at [email protected].